Hajj: A Once in a Lifetime Obligation 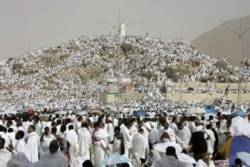 When a person tries to figure out the reasons behind imposing Hajj only once in a lifetime, he may wonder whether this is only for the sake of facilitation or for another reason. Facilitation may be the reason, however what is certain is that Hajj involves many lessons and great teachings and if the Muslim understood them well, they would be sufficient for him and he would not need to perform Hajj again. That is why one is not obliged to perform Hajj over and over again as long as the first time is sufficient if it was performed as Allah The Almighty wishes and likes. Nevertheless, it is recommended that the Muslim perform Hajj after that as many times as possible to internalize these lessons and such teachings in his soul until they become like inborn traits. In such a case, Allah The Almighty would encompass His slave in His Mercy and engulf him in His Bounty.
The ultimate purpose of Hajj is to achieve untainted Tawheed (monotheism):
Devotion to Allah The Almighty and acknowledging His Oneness is the essence of Hajj as explicitly stated in the Hadeeth in which the Prophet,

, said: “Whoever performs Hajj for the Sake of Allah…”, i.e. when one performs Hajj, he does so for the Sake of Allah The Almighty to provide proof of the deep-rooted monotheism in his heart. One can easily recognize that confirmation of monotheism is the essence of Hajj since its legislation at the time of Ibraaheem (Abraham), may Allah exalt his mention, and throughout all its rites from beginning to end. Allah The Exalted Says (what means): {And [mention, O Muhammad], when We designated for Abraham the site of the House, [saying], "Do not associate anything with Me and purify My House for those who perform Tawaaf...} [Quran 22:26]
Al-Qurtubi

commented on this verse saying, "This verse rebukes the polytheists who live in the neighborhood of the Sacred House, because adherence to and preservation of monotheism was the condition that was imposed on their father and his offspring, including you, but you did not meet this condition; and instead associated others with Allah The Almighty."
Therefore, the polytheists are forbidden from approaching the Holy House, as Allah The Exalted Says (what means): {O you who have believed, indeed the polytheists are unclean, so let them not approach al-Masjid al-Haram after this, their [final] year. And if you fear privation, Allah will enrich you from His bounty if He wills. Indeed, Allah is Knowing and Wise.} [Quran 9:28]
The pilgrim commences his Hajj by acknowledging Tawheed (Oneness of Allah The Almighty) when he says Talbiyah: “Labbayka Allahuma Labbayk, Labbayka La Shareeka Laka Labbayk, Inna Al-hamda wan-Ni‘mata, Laka wal-mulk, La Sharika Lakk (Here I am, O Allah! Here I have come. Here I have come; there is no partner with You. Verily, praise, blessing and Kingdom are Yours. There is no partner with You).”
The Muslim is also required to make frequent Thikr, Talbiyah and Tahleel (saying, “Laa Ilaaha Illa Allah (There is none truly worthy of worship but Allah)”). He should also make Takbeer while throwing the Jamaraat (pebbles). When he intends to return to his country after finishing Hajj, he should return to the Sacred House to perform the Farewell Tawaaf along with making Thikr, supplication, Tahleel and Takbeer as much as possible. Hence, the pilgrim starts Hajj by acknowledging the Oneness of Allah The Almighty and concludes with the same thing.
Then comes devotion, i.e. to make this act of worship sincerely for the sake of Allah The Almighty, far removed from ostentation, seeking fame or good reputation. The Prophet,

, said: “Allahumma haathihi hijjatun la riyaa’a feeha wa la sum‘ah (O Allah, this is a pilgrimage in which there is no showing off or seeking reputation).”
Things that invalidate and blemish Hajj:
Sexual intercourse and sins adversely affect the desired reward of Hajj. Sexual intercourse invalidates Hajj, and so does foreplay, kissing, and sexual speech in the presence of women.
Allah The Exalted Says (what means): {so whoever has madeHajj obligatory upon himself therein [by entering the state of Ihraam], there is [to be for him] no sexual relations and no disobedience and no disputing during Hajj.} [Quran 2:197]
Abu Bakr Al-Jassaas

commented on this verse saying,
In this verse, Allah The Almighty commanded the pilgrim to guard his private parts and tongue from all sins and acts of disobedience. Indeed, sins are prohibited before entering the state of Ihraam, but Allah The Almighty Stated that they are especially prohibited during Ihraam to stress the great status of the state of Ihraam and to confirm that the punishment of the sins that are committed during the state of Ihraam are more severe.
The greatness of Hajj cannot be compatible with committing sins or vices by the pilgrim. Hence, the pilgrim must purify himself by refraining from committing any sin so as to refine his soul and habituate it to abandon its bad habits. In this way, the pilgrim will emancipate himself from evil desires, and will perfect his soul with noble manners and good behavior.
The reward of the pilgrim:
What a great reward it is to receive forgiveness of all sins! The Muslim would return sinless after performing Hajj as legislated and directed by Allah The Almighty and His Messenger,

. He will return to his house after performing Hijrah and Jihaad, and after disassociating himself from the polytheists, and showing kindness to the poor and the needy. He will be far from sins just as he was on the day his mother gave birth to him, a clear white slate untainted by any blemish. Ibn Hajar

said, “The words ‘as he was on the day his mother gave birth to him,’ mean without any sin. Apparently, this means forgiveness of minor and major sins and their consequences.”
This great gift is indeed more valuable than the whole earth full of gold, as it means that the pilgrim has been secured from the repercussions of his previous sins and misdeeds. Thus, the pilgrim should prepare himself for the future to make sure that his record of deeds remains clean. Allah The Almighty Says (what means): {The Day every soul will find what it has done of good present [before it]} [Quran 3:30]