Hajj and Its Influence on Boosting Faith 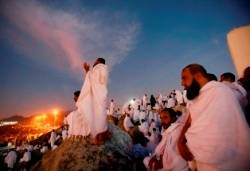 Hajj is one of the five pillars of Islam and it is obligatory for every Muslim who has the physical and financial ability, as Allah The Almighty Says (what means): {And [due] to Allah from the people is a pilgrimage to the House - for whoever is able to find thereto a way.} [Quran 3:97]

The rituals of Hajj have a great influence on boosting faith, because it is an established fact that Faith (Eemaan) increases through good deeds and decreases through sins and misdeeds.
Hence, every Muslim, whether or not he has performed Hajj, should contemplate the sublime meanings of these rites to reap the fruits of increasing Faith and strengthening his trust in Allah The Almighty.
Ihraam:
Why do men wear two pieces of white cloth, and avoid form-fitting clothes when they enter the state of Ihraam?
The clothes of Ihraam are similar to the shroud, so, they remind us of death so we can prepare ourselves for it.
These clothes also remind us of the Resurrection when we will be barefoot and naked without any dress or shroud.
These clothes also remind us of the Blessings of Allah The Almighty upon us, as He Says (what means): {O children of Aadam, We have bestowed upon you clothing to conceal your private parts and as adornment….} [Quran 7:26]
This is the clothing in this world, but what about our clothing on the Day of Resurrection, when we will be naked? The answer is in the last part of the verse in which Allah The Exalted Says (what means): {But the clothing of righteousness - that is best.} [Quran 7:26]
Just as we leave the sewn clothes when we enter the state of Ihraam, we have to make all our good deeds fully devoted to Allah The Almighty without associating anyone with Him.
Talbiyah:
Talbiyah means saying “Labbayak Allaamumma Labbayk Labbayka La Shareek Laka Labbayk (Here I am at Your service O my Lord. Here I am. Here I am at Your service and under Your Command and You have no partners.)”
Talbiyah is an acknowledgment of servitude and absolute submission to the Mighty Lord.
Before Islam, the disbelievers used to perform Hajj and make Talbiyah but they used to add, “At Your service. You have no partner except the partner that You have. You own Him and whatever he owns.”
Tawaaf(circumambulation around the Ka‘bah):
When one performs Tawaaf around the Ka‘bah, he should remember that this is the first House of Allah The Exalted on earth and that:
-      Whoever enters it shall be safe.
-      Allah The Almighty made the House a place of return for the people and a place of security.
-      Ibraaheem (Abraham) and Ismaa‘eel (Ishmael), may Allah exalt their mention, raised its foundations.
-      Hearts long for it and when they leave, they always wish to return.
-      ‘Abdul Muttalib, the grandfather of the Prophet,

said, “The house Has a Lord, and He Will Protect it.”
-      The Quraysh used to live around it. They were polytheists and used to circumambulate it naked.
-      It is the birthplace of the call of Islam.
Kissing the Black Stone:
-      The Black Stone is nothing but a stone, i.e., it can neither harm nor benefit.
-                                                                                                               Kissing this stone is an act of Sunnah (Prophetic tradition), but believing that it can benefit, harm, or do anything is an act of Shirk (polytheism).
-      Fighting other people to reach it is a sin.
Kissing the Black Stone is an act of the Sunnah for whoever can reach it without harming other people or intermixing with men (for women); however, kissing any other stone opens the doors of Shirk. The believer kisses the Black Stone while his heart is attached to Allah The Almighty rather than the stone itself.
Drinking the water of Zamzam:
This is a stressed act of the Sunnah, but when the believer drinks it, his heart should be attached to the blessing of Allah The Almighty, along with the belief that Allah The Almighty has endowed this water with the ability to cure diseases. Nevertheless, the believer always knows that Allah The Almighty can cure him through any other water or medicine, and that He can also delay the recovery of a person even if he drinks the water of Zamzam.
These are some of the indications and meanings that are implied in the Quranic verse in which Allah The Exalted Says (what means): {And if Allah should touch you with adversity, there is no remover of it except Him. And if He touches you with good - then He is over all things competent.} [Quran 6:17]
Hence, whoever attaches his heart to Allah The Almighty alone has fulfilled true monotheism, which is the right of Allah The Almighty over His slaves.
Sa‘y (ritual running) between Mount As-Safa and Mount Al-Marwah:
Pilgrims and those who perform ‘Umrah run between these two hills, to remember and to contemplate.
Near As-Safa, Ibraaheem, may Allah exalt his mention, left his wife and young child in a barren valley in obedience to Allah The Almighty, but we, on the other hand, find it difficult to leave our sins!
The believing wife obeyed her Lord and then her husband regarding an issue that may have led to her death along with her baby.
The mother of Ismaa’eel, may Allah exalt his mention, ran between As-Safa and Al-Marwah hoping that she would find some water for her baby who was about to die of thirst.
This demonstrates sheer faith when its sweetness penetrates the heart!
Standing at ‘Arafaat:
This is the greatest pillar of Hajj and every pilgrim must stand at ‘Arafaat; otherwise, his Hajj will be invalid. The gathering of the pilgrims on ‘Arafaat reminds us of the Day of Assembly: {The Day He will assemble you for the Day of Assembly} [Quran 64:9]
Whoever remembers the Day of Assembly should prepare himself well for it.
On the Day of ‘Arafah, the pilgrim may face difficulty in obtaining water. So, when he gets it, he should remember the verse in which Allah The Almighty Says (what means): {And the companions of the Fire will call to the companions of Paradise, "Pour upon us some water or from whatever Allah has provided you." They will say, "Indeed, Allah has forbidden them both to the disbelievers."} [Quran 7:50]
During the Farewell Pilgrimage, a man fell while he was riding his she-camel and making Talbiyah and he broke his neck. Thereupon, the Prophet,

, said: “Wash him with water and lotus leaves, and shroud him in his two garments, but do not apply perfume to him or cover his head, for he will be raised on the Day of Resurrection reciting Talbiyah.”
He died while making Talbiyah, which is an act of worship; hence, he will be resurrected while performing the same act of worship.
So what about those who die while committing sins?
This is a fact that many people have become heedless of, namely: there is no refuge and no place of safety from Allah The Almighty but with Him.