Hajj and the Invitation to Islam 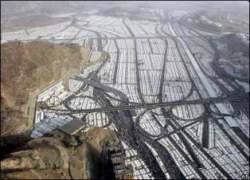 Hajj is a great pillar of Islam that does not need any clarification of its virtues, merits and rank in Islam. It is adequate to mention that Hajj is the fifth pillar of Islam. Allah The Exalted placed it in a high status in the hearts of all Muslims.

Allah The Exalted honored Makkah with the presence of the Sacred House, and therefore the hearts of all Muslims are inclined to it. People from the east and the west, in fact, from every corner of the globe come to Makkah with a longing heart. Some may have been waiting years for this moment. Unfortunately, some of the dwellers of Makkah do not realize the great virtues and merits of Hajj as other Muslims, who yearn to perform Hajj.
Some people have a lifetime wish to perform Hajj. They spend their lives saving money just to perform Hajj; just to perform the obligatory Hajj once in their lifetime. These Muslims may turn 50, 60, or 70 without being financially able to perform Hajj and may die before fulfilling this wish.
If you find yourself amazed at such people, allow me to relate a story about a man who was imprisoned in the USA. This prisoner was asked, “What caught your attention the most while serving your sentence in prison?” The prisoner replied, “There was a Muslim man from Nigeria who was imprisoned with me. I noticed that he was always sad, depressed, and distressed. I thought that he was suffering from a financial crisis or that his family was struggling with an ordeal or that he was sentenced to death. I had many thoughts about the reasons behind his distress and sadness, but they were very far away from the real reason. I had the chance to sit with him once; so, I asked him, “I see you always sad and depressed; what is saddening you?” He replied, “I am only concerned with one issue.” I inquired, “What is it?” He responded, “I am a Muslim and I have been sentenced to 50 years in prison, and I am now over 30 [or perhaps he said 40]. This means that if I serve my sentence, I will die in prison. This means that I will miss the chance of performing Hajj in my life.”
This was the biggest worry and greatest problem of a man who was imprisoned and exempted from Hajj, according to the Islamic Sharee‘ah (Islamic legislation).
This story highlights the great significance of Hajj in the hearts of Muslims.
Even sinners and dissolute persons, despite their sins and dissoluteness, yearn to perform Hajj. They long to go to the Ka‘bah. Some people are said to have admonished a poet who was known for his dissoluteness and drinking wine. When the poet got fed up with their admonishment, he composed a poem that means, “If I performed the five daily prayers, Allah The Exalted Would Forgive my dissoluteness. I have not associated partners with Allah and I hold on to the true religion of Islam. I [wish to] participate in Jihaad and earn some money in order to perform Hajj. This religion is plain and clear; so, spare me treading the hidden paths.”
Dear readers, despite this man’s dissoluteness, he yearned to perform Hajj and was willing to exert great efforts to fulfill that dream!
People from all over the world, from different countries, nationalities, languages, schools of Fiqh (Islamic jurisprudence), sets of beliefs, and ideologies, come to Makkah. Some of them are pious, devout, knowledgeable and active worshippers and others are the exact opposite. We should ask ourselves, what do we offer these pilgrims? What do we, the people of Makkah, do for pilgrims who come from every corner of the globe? What do we do? What do the callers to Allah do for them? What do the seekers of knowledge do for these pilgrims? What do the scholars offer their fellow Muslims?
Dear reader, you should ask yourself these questions and ponder on the answer in real life. Then, you should compare it to the following narration that is cited in the Sunnah books. A year after the first Pledge of Al-‘Aqabah, during the season of Hajj, the second Pledge of Al-‘Aqabah took place. Jaabir ibn ‘Abdullaah, may Allah be pleased with him, said,
“The Prophet

spent ten years following the pilgrims while they were performing the rites of Hajj (in Majannah, ‘Ukaath, and Mina), saying to them: “Who would support me so that I can deliver the Message of my Lord to the people and he would be rewarded with Paradise?” However, he received no answer. A man would leave his home in Mudhar or Yemen and his people and relatives would warn him about the man of Quraysh, i.e. the Prophet

. They would say to him, “Beware of this man of Quraysh so that he would not tempt you [to forsake the religion of your fathers and grandfathers].”
The Prophet

used to walk by the tents of the pilgrims, inviting them to Islam and people would point at him and whisper among themselves. Then, Allah The Exalted chose us from Yathrib [Madeenah] to believe in him. A man from Yathrib would come and meet with the Prophet

listen to the Quran and embrace Islam. He would go back to his people and communicate the message of Islam to his townsfolk until there was not a single house in Madeenah except that some of its dwellers had proclaimed their Islam. Then, we identified leaders from among ourselves and seventy of us assembled. We asked ourselves, “How long will we stand still while the Prophet

is roaming in the mountains of Makkah and Muslims are afraid of the people of Quraysh?”
We went to Makkah in the season of Hajj and arranged a meeting with the Prophet

in Al-‘Aqabah territory. We went to the place of meeting individually or in pairs until we all reached the place. We asked the Messenger of Allah

about the principles over which he would take a pledge. The Prophet

answered:
·        To listen and obey in all sets of circumstances.
·        To spend in plenty as well as in scarcity.
·        To enjoin good and forbid evil.
·        In the service of Allah, you will fear the censure of none.
·        To defend me in case I seek your help, and debar me from anything which you debar yourself, your spouses and children. And if you observe those precepts, Paradise is in store for you.
When we started paying allegiance to the Prophet

As‘ad ibn Zuraarah, may Allah be pleased with him, who was the youngest of the seventy apart from me, stood up and gave the following short address: "Take it easy people of Yathrib! We have covered that long distance because we have deep belief that he (Muhammad)

is the Messenger of Allah. We are already convinced that following him entails departure from the pagan Arabs even if it were at the risk of our lives. Should you persevere in this course, hold fast to it, and your great reward is placed in the Hand of Allah, but if you are caught in fear, I admonish you to give it up right now, and then you would be more excusable by Allah.” We said, “Move your hand away from us, As‘ad. By Allah we would never forsake or annul this pledge.” We started giving the pledge to the Prophet

one by one. He repeated the terms of the pledge for us and guaranteed we would enter Paradise.” [Ahmad, Al-Bayhaqi, and Al-Haakim]
This is only part of the narration, but this part sheds light on the topic under discussion. Dear pilgrim who is determined to come from your faraway country to perform Hajj, let us ponder on the Sunnah of your Prophet,

, to find out how he seized this great blessed spiritual season. Then, let us ponder on its great fruits.
Is not humanity today in dire need for this guidance?
Do people not come to the Ka‘bah with longing humble submissive hearts?
Did Allah The Almighty not make a covenant with the people of knowledge? Did Allah The Exalted not command us to call to Islam? What did you do? What have you prepared for your Hajj?
Dear Muslims who are heading towards Makkah to perform Hajj, you should follow the example of the Prophet,

.
You should call to the religion of truth even if it is through a book or a tape. You should consult with the people of knowledge and wisdom about this. Do not deprive yourself by wasting such a great gathering that may not be given to some, or rather many, people except once in a lifetime. Make full use of this chance to benefit from those people whose knowledge and piety is worthy of benefiting from and help those who came with longing and humble hearts. Clarify doubtful matters for the ignorant people, advise the sinners and do righteous deeds so that you may prosper.
I would like to remind you to be courteous and hold on to wisdom in calling people to Allah The Exalted who Says (what means): {Invite to the way of your Lord with wisdom and good instruction, and argue with them in a way that is best.} [Quran 16:125]
If you are unable to practice Da‘wah (inviting to Islam), then spare people your evil, help the pilgrims, receive them with a cheerful face, and deal with them kindly with the refined Islamic morals. This would in itself be one of the best forms of Da‘wah.