Hajj as a Medium of Communication and Calling to Islam 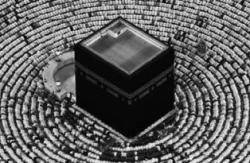 Hajj is not just one of the pillars of Islam and a kind of emigration to Allah The Exalted that unites Muslims from various parts of the world, nor is the objective behind prescribing it merely a form of adherence to the True religion. Instead, Hajj is also an important tool of Islamic Da‘wah (invitation to Islam) and a powerful medium of communication.

Hajj is one of the means of communication specific to Islam. Hajj is the largest international conference on the face of the earth, the annual convention of faith and the greatest gathering of humanity ever. Muslims from every corner in the globe meet in Hajj. Allah The Exalted Says (what means): {And proclaim to the people the Hajj [pilgrimage]; they will come to you on foot and on every lean camel; they will come from every distant pass…} [Quran 22:27]
Allah The Almighty called for the greatest and largest gathering; the greatest conference, which is Hajj. Muslims from every place on earth assemble in Makkah during Hajj, in response to the call of Allah The Exalted. They migrate to their Lord with longing hearts, leaving their parents and families, and devoting themselves solely to worship. They observe the rites that Allah The Exalted prescribed exactly as they are commanded; without changing or neglecting any of them.
Hajj has a great impact on the hearts of Muslims; it solidifies their beliefs and generates faith and tranquility within their hearts. The Prophet,

, performed Hajj in order to show Muslims the due rituals of Hajj and ‘Umrah, and underline the Hajj rites which are considered a means of Da‘wah to Islam.
The first means of Da‘wah in Hajj is the common chant which the pilgrims repeat with humble and submissive hearts to their Lord.
Among the manifestations of the Islamic Da‘wah that are associated with Hajj:
1 - Circumambulation around the Ka‘bah seven rounds.
2 – Standing in ‘Arafah, which can be likened to a great conference and convention of Faith where Muslims from every corner of the globe meet.
3 – Talbiyah (saying "Labbayka Allahumma Labbayk, Labbyka la Shareeka Laka Labbyak": Oh Lord! Here I come to you O Allah! Here I am to worship you. Here I am to respond to you. There is no partner with You; verily Praise, Bounty, and Dominion belong to You. There is no partner with you.") and Takbeer (saying Allahu Akbar: Allah is The Greatest). These are supplications and collective chants that enthuse pilgrims. The repetition of these melodious devotional chants serves as an effective media technique to instill the meanings of Tawheed (Islamic monotheism) and obedience to Allah The Almighty deep within the hearts.
4 - Throwing the pebbles is also an effective technique to deepen the concept of Satan’s enmity against man. This ritual symbolically expresses man’s repugnance for the devil.
5 – Sa‘y between As-Safa and Al-Marwah constitutes a wonderful act that aims at enhancing Muslims’ commitment and adherence to their religion and their Lord.
Hajj has a profound impact on Muslims who develop better and stronger devotion and adherence to the Prophet,

, and commitment to his Sunnah (tradition).
Are there any benefits of Hajj aside from worship?
There is no doubt that peaceful gatherings in every time and place have their fruits that benefit humankind. Some of the benefits of Hajj are engaging in trade and exchange of material goods, as well as the exchange of information, spiritual material, and news. Muslims should seize this act of worship, utilize it properly, and make full use of it. It is an opportunity that is offered to Muslims to benefit from this powerful Islamic means of communication. Perhaps that is what is meant by the verse that reads (what means): {That they may witness benefits for themselves …} [Quran 22:28]
‘Ukaath market:
The Arabs did not regard markets as mere trade centers for the exchange of material goods, but they were rather exhibitions of intellectual, literary goods as well as exhibitions of material or commercial goods. Arabian markets were the places where a tribe would declare war against another tribe, where people would meet and get to know one another, and where poets from various tribes would meet and vie with one another in the composition of poetry. Each tribe would choose a poet to compose a poem and recite it before the audience [in the marketplace] who criticized the poetry. Among the famous Arab poets who were renowned at these markets was An-Naabighah and others. The market of ‘Ukaath was considered the greatest market of the Arabs in the history of the pre-Islamic era. ‘Ukaath market was the Arab public fair in the pre-Islamic era. It was the official literary and linguistic conference of the Arabs. It had arbitrators who used to have large tents set up for them. Poets from various tribes used to present their poetry and literature before the arbitrators. Whatever these arbitrators liked, was considered good poetry and whatever they disliked and forsook was rejected.
‘Ukaath market was also an exhibition of many of the Arabs’ customs and social conditions. Quss ibn Saa‘idah used to preach to people in ‘Ukaath market, reminding them of their Creator and enjoining good; and political lectures were held in the marketplace where many issues were addressed by the tribesmen.
Whoever wanted to grant any accreditation (Ijaazah) to someone used to proclaim it in ‘Ukaath market before all the Arabs. If a tribe wanted to declare war against another tribe, it used to do so in ‘Ukaath market.
‘Ukaath market was like the official newspaper in our time. If they wanted to defame anyone who did a horrific act, or violated the Arabian traditions, they would defame him in ‘Ukaath market so that all the Arabs would know and avoid him.
Many of the Arab tribes dwelled in the area around ‘Ukaath. They used to boast about their status, dispute and vie in glory with one another in ‘Ukaath market.
‘Ukaath area is located between Makkah and Taa’if and the market was held in the Hijri month of Thul-Qi‘dah. It was attended by the tribes of Quraysh, Ghatfaan, Hawaazin, Khuzaa‘ah, Al-Ahaabeesh, sects from Iraq, Bahrain, Yamaamah, Oman, Yemen and other parts of the Peninsula. This market was free from any type of tax or fees; as it was not under the control of any of the princes or rulers.
Three years after Bi‘thah (the Divine commission of the Prophet,

, to bear and proclaim the message), the Prophet,

, stood in ‘Ukaath market, calling people to Islam. He invited people to goodness, guidance and Eemaan, but was stricken with deep sadness for his people’s disbelief in Allah The Exalted. He was determined to go to each tribe and each group at their place, presenting Islam to them.
We conclude from this that the concept of communication and media was present in the ancient nations. Man knew both communication media and propaganda [in the early ages], but in different ways and forms that suited his environment, place, and origins.