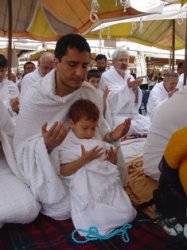 For the true Muslim, this life is no more than a passage to the Hereafter, and the Muslim only needs this life to achieve his ultimate purpose, which is success in the Hereafter. In this sense, the Muslim should not isolate himself from the rest of the world to live in a distant corner or in a shell; rather, he should interact and live his life to use it fully, rather than allow it to use him. He should subject it to achieve the Sharee‘ah-recommended goals and only take from it what helps him to achieve this purpose.

Therefore, the Hajj, which is one of the greatest acts of worship and one of the five pillars of Islam does not forbid the pilgrim from seeking worldly benefits. Allah The Exalted Says (what means): {That they may witness benefits for themselves and mention the name of Allah on known days…} [Quran 22:28]

Those who isolate themselves from the rest of the people to dedicate themselves to worship without participating in the affairs of the Ummah, Jihaad, or fighting the enemies, have not benefitted from the lessons of Hajj. Likewise, those who are absorbed in worldly ambitions and hopes until they harm their religion, should remember that the Aayah (Quranic verse) mentioned the benefits accompanied by remembrance of Allah The Almighty.

On the Day the Prophet, performed Hajj, Allah The Exalted revealed (what means): {…This day I have perfected for you your religion and completed My favor upon you and have approved for you Islam as religion…..} [Quran 5:3]

On that day, the ‘Arafah Day of the 10th year A.H, Allah The Almighty perfected the religion of this Ummah, completed His favor upon it and approved Islam as the religion for it. This is a great bounty from Allah The Almighty upon His slaves, and whenever a Muslim stands at ‘Arafah, he should remember this bounty and thank Allah The Almighty for this great blessing. He should also pledge not to be the chink in the armor through which the enemies of Islam can attack this great religion. He must recognize that Allah The Exalted provided him with a perfect methodology of life that will make him desire nothing beside it.

Ibn Katheer, may Allah have mercy upon him, commented on the above-mentioned Aayah saying,

"This, indeed, is the greatest favor from Allah The Almighty to this Ummah, for He has completed their religion for them, and they, thus, do not need any other religion or any other Prophet except Muhammad. This is why Allah The Almighty made Muhammad the Final Prophet and sent him to humankind and Jinn. Therefore, the permissible is what he allowed; the impermissible is what he prohibited, the Law is what he legislated, and everything that he conveyed is true and authentic and does not contain lies or contradictions."

Is it possible for whoever looks toward the East, the West, the North, or the South to import opinions, laws, thoughts, and creeds to say that he believes that the religion is perfect?

Similarly, those who commit religious innovations, exaggerate in religious duties, or rule according to secular laws instead of the law of Sharee‘ah (Islamic legislation), have not understood this great lesson from the duty of Hajj.