In the Best Days of the Year, Turn Over a New Leaf - I 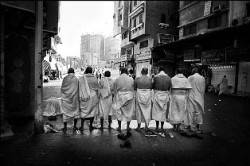 Dear brothers and sisters, this is the greatest opportunity you may be given in your entire life. It is a great chance to turn over a new leaf, after all these are the best days ever [in the entire year]. In fact, they are even better than the last ten days of Ramadan!
The Prophet

said: “‘There are no days in which righteous deeds done in them are more beloved to Allah than these days, i.e. the first ten days of Thul-Hijjah.’ Some Companions asked, ‘Not even Jihaad?’ He replied: ‘Not even Jihaad, except a man who goes out (for Jihaad) with his self and his wealth, then he does not return with anything from that.’”
The Companions themselves were amazed to know that doing righteous deeds during the first ten days of Thul-Hijjah is even better than participating in Jihaad (striving in the cause of Allah The Almighty.
Undeniably, this is a great opportunity to turn over a new leaf with Allah; a great chance to earn countless rewards and annul past sins. This spiritual season is a good chance to receive equal rewards with those who sacrifice their lives and money in Jihaad and a golden opportunity to recharge faith within the heart. Dear reader, what are your plans for the first ten days of Thul-Hijjah? How are you preparing yourselves to receive these blessed days?
If, indeed, these days are as important as we have pointed out, then you should chart a clear plan and identify specific activities in order to seize this great chance.
If you wish to be a winner at the end of these days, forget improvisation and acting on the spur of the moment. You should set clear objectives for this blessed spiritual season.
These are some activities for the first ten days of Thul-Hijjah. I hope that you carry them out, all of them, even if once in your lifetime:
1- Reciting the entire Noble Quran in the first ten days of Thul-Hijjah:
Allah The Exalted Says (what means): {And We Send down of the Quran that which is healing and mercy for the believers, but it does not increase the wrongdoers except in loss.} [Quran 17:82]
The Prophet

said: “Whoever recites one letter from the Book of Allah he will receive a good reward, and every good deed is a ten-fold reward. I do not say that ‘Alif Laam Meem’ is one letter but ‘Alif’ is one letter, ‘Laam’ is one letter and ‘Meem’ is one letter.”
You should recite the entire Quran at least once in the first ten days of Thul-Hijjah. Moreover, you should ponder over the verses of the Quran; contemplate each verse, word and letter in order to savor the remedy for your heart. In order to recite the whole Quran in the first ten days of Thul-Hijjah, you should read three parts a day. Bear in mind that you will get 500,000 rewards for reading three parts of the Quran! Can you imagine earning 500,000 rewards a day just for the recitation of the Quran!
Not to mention that rewards are doubled in these blessed days.
2- A banquet for each prayer:
The Prophet

said: “Whoever goes to the mosque in the morning and evening (for the congregational prayer) and returns; Allah will prepare for him an honorable place in Paradise every time he goes and comes back.”
One should perform ablution before leaving his house, then go to the mosque. Repeat the words of the Athaan in the mosque, implore Allah The Exalted to bestow His blessings and peace upon the Prophet

and then supplicate Allah The Almighty to grant him Al-Waseelah (the highest rank in Paradise) and superior status over all creatures.
Then, one should perform the Sunnah prayer before the congregational prayer with an attentive and humble heart and then supplicate Allah The Almighty. The supplications between the Athaan and Iqaamah are answered, of a surety.
What a fortunate man you would be if Allah The Exalted chose you and bestowed upon you the grace of crying out of fear of Him while praying in the first row on the right of the Imaam. Then, you finish your prayer, delighted and content with it, asking your Lord for forgiveness, thanking Him and remembering Him. Then, you can perform the Sunnah prayer after reciting the authentic Thikr (words of remembrance of Allah The Almighty) after the prayer.
If you do all of that, you would receive these rewards:
Dear reader, is it not a great banquet of rewards and generous hospitality?
Would a wise man miss such a great opportunity?
3- Thikr:
The Prophet

taught us that whoever recites this Thikr will have a tree in Paradise for each word and that the reward of reciting each word of this Thikr is equal to Mount Uhud.
Dear reader, I believe that just as Ramadan is an intensive spiritually enlightening experience due to the believer's involvement with the Quran, the first ten days of Thul-Hijjah are an intensive spiritual enlightening experience with Thikr.
A person may say that he has no time for all this. My advice for such a person is to get used to reciting Thikr on your way to any place, while lying down on bed before sleeping, while talking with others and while eating.
If you train yourself to do so, you can at least recite Thikr 1000 times a day. This means gaining 4000 trees in Paradise per day! Dear reader, do you know that if you kept doing this on the first ten days of Thul-Hijjah, you would have a marvelous garden in Paradise. Can you imagine possessing 100,000 acres in Paradise just in the first ten days of Thul-Hijjah? Is it not a great opportunity? It would be unfortunate if a person misses it.

In the Best Days of the Year, Turn Over a New Leaf - II