In the Best Days of the Year, Turn Over a New Leaf - II 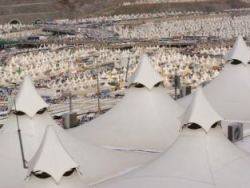 Hunaydah ibn Khaalid, may Allah be pleased with him, narrated on the authority of his wife that some of the wives of the Prophet,

, said: “Whoever fasts one day for the Sake of Allah, Allah will keep his face away from Hell for (a distance covered in a journey of) seventy years.”
Thus, fasting on these blessed days enables you to earn great rewards in the Hereafter.
Hajj and ‘Umrah:
Imagine being able to save 50,000 pounds and earn 50,000 rewards, and something that is even more and better than all the imaginable worldly pleasures.
You can attain this great reward by staying in the mosque after performing the Fajr Prayer in congregation until sunrise, then pray two Rak‘ahs (units of prayer). The Prophet,

, said: “Whoever prays the Fajr Prayer in congregation then sits in the mosque, reciting Thikr and remembering Allah until the sun rises, then prays two Rak‘ahs (the Dhuha Prayer), will receive the complete reward of performing Hajj and ‘Umrah.”
During this time, you can read the Noble Quran, recite the morning Athkaar, renew one’s repentance, supplicate, forgive whoever has wronged you, ask for the Pardon of Allah The Almighty and perform new acts of worship.
The Qintaars of Paradise :
The Prophet,

, said:
“‘Among the slaves of Allah are people who are neither prophets nor martyrs, but whom the prophets and martyrs will deem fortunate because of their high status with Allah on the Day of Resurrection.’ The Companions asked, ‘O Messenger of Allah, who are they?’ The Prophet

said:‘They are people who have no property (transaction) and kinship ties among themselves, yet they love each other for the Sake of Allah. By Allah, their faces will be luminous [on the Day of Resurrection] and they will be (sitting) in (pulpits of) light. They will feel no fear when people will be feeling fear, and they will feel no grief when people will be grieving.’The Prophet

then recited the verse (which means): {Unquestionably, [for] the allies of Allah there will be no fear concerning them, nor will they grieve -…}[Quran ,10:62]”
You can invite your friends for Iftaar [meal eaten to break the fast] on one of the first nine days of Thul-Hijjah. You will have half an hour before the Maghrib Prayer to recite Thikr and supplication. You can also study or listen to the Noble Quran, listen to a religious tape or a CD and you can give them some books and tapes as gifts.
If you do so, you will receive the rewards for offering food to a fasting person, practicing Da‘wah to Allah The Almighty, enjoining good and forbidding evil, helping others to perform a righteous deed, and helping others to attain steadfastness on the straight path.
Maintaining kinship ties:
The Prophet,

, said: “O people! Spread Salaam (the greetings of peace), feed the hungry (poor and needy), maintain kinship ties, and offer prayer when others are asleep and (you will) enter Paradise in peace.”
The Prophet,

, also said: “The womb [i.e., ties of kinship] is suspended from the Throne [of Allah The Almighty], saying, ‘Whoever preserves me, Allah will uphold ties with him [or her] and he who severs me, Allah will sever the bond with him.”
Therefore, you should devote at least half an hour or more to doing some act of dutifulness to your parents, visiting your relatives, displaying great hospitality towards your neighbors, and bringing happiness to any Muslim’s heart.
Day of ‘Arafah:
Dear reader, do you know how significant this day is?
The Prophet,

, said: “Fasting the Day of ‘Arafah expiates the sins of two years: the past one and the coming one.”
Let us calculate it together: fasting 12 hours = forgiveness of the sins of 24 months.
This means that each hour on ‘Arafah Day gives you the forgiveness of a month. Each 60 minutes equals 60 days; each minute equals a day.
Can any wise person waste a minute of this blessed day?
What are you planning to do on this day?
You can go to the mosque half an hour before the Fajr Prayer in order to implore your Lord to grant you success on that day and protect you from falling into the abyss of sins.
You can also intend to fast that day, intend I‘tikaaf [seclusion in the mosque for the purpose of worship] during that time until sunset. You can also recite Thikr and supplications.
‘Eed Day Project:
Dear readers, bear in mind that the ‘Eed Day is the best day of the whole year. The Prophet,

, said: “The best days in the Sight of Allah are the days of Nahr and Qarr, i.e. the day of staying at Mina.”
You can start the ‘Eed Day by performing the ‘Eed Prayer and congratulating your fellow Muslims with a smiling and cheerful face. You can visit your parents, relatives, and friends.
You can also offer an animal as a sacrifice. Some people might say that they cannot afford it, but a number of people can get together to buy one animal, according to one's financial ability.
Do not miss this golden opportunity:
Do not miss the chance of having a house built in Paradise every day. The Prophet,

, said: “Whoever recites the chapter Al-Ikhlaas (No. 112) 10 times, Allah will build for him a palace in Paradise.”
Thus, you would have a garden, as well as houses and palaces in Paradise!
Dear readers, do not forget to bring happiness to the hearts of a poor family. You can offer money, meat, food, and clothes to a poor family before ‘Eed.
You can also try doing the following righteous deeds on one day: fasting, following a funeral procession, visiting a sick person, and offering charity. Whoever does all these good deeds on one day, all the gates of Paradise would be open wide before him.
Only for busy people:
Dear readers, after being offered all these great opportunities to perform righteous deeds on these blessed days, no one should miss them under the pretext of being very busy and having no time for these activities. However, I would like to suggest some special activities for very busy people, who may be having their mid-term exams or so on, so as not to miss the great rewards of these blessed days.
You can allocate half an hour before or after each prayer in the mosque and another hour before the Fajr Prayer to do the following:
Do not deprive yourself of the rewards:
Dear readers, bear in mind that each hour, even each minute, of these blessed days, literally, means gaining forgiveness for a whole day of sins and misdeeds. A total of 86,400 sins would be forgiven with each minute in which you perform good deeds on these blessed days! You should not waste a single minute from these precious and priceless days, the best days of the entire year.

In the Best Days of the Year, Turn Over a New Leaf - I