Journey Towards Allah The Almighty 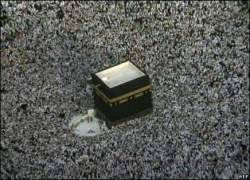 These are meaningful words that were said by the best of all creation and the most truthful of them, Muhammad ibn ‘Abdullaah,

, and they imply immense grace and the limitless bounty of Allah The Almighty Who does not need anything from His creatures. This bounty was also stated in other texts of the Sharee‘ah (Islamic legislation). For example, when ‘Amr ibn Al-‘Aas, may Allah be pleased with him, came to proclaim his reversion to Islam, he said, “I wish to lay down some conditions.' The Prophet

asked: `What conditions do you wish to put forward?'He replied, `To be granted forgiveness.' The Prophet

said:`Do you not know that (embracing) Islam wipes out all that has gone before it (previous misdeeds)? Verily, emigration wipes out all the previous sins, and the Hajj (pilgrimage) wipes out all the previous sins.”
One wishes to understand why Allah The Almighty granted this immense bounty in return for this act of worship that is imposed upon the Muslim only once in his lifetime. This aspiration is not because we consider that this is too much for the benevolence of Allah The Exalted (we seek refuge in Allah from such an assumption), as His Bounty and Mercy are infinite. This is only an attempt to find out the reasons behind this immense bounty to encourage ourselves to attain it and to do our best to win the great reward about which the Prophet,

, told us.
Let us speak about these four points with some detail.
First: Hajj
The word “Hajj’ in Arabic means “heading to” or, “frequently heading to an entity that you glorify”.
In Sharee‘ah, Hajj means heading to Al-Masjid Al-Haram with a specific appearance, at a specific time to perform specific acts.
Hajj is one of the acts of worship that require both physical and financial sacrifices to be performed, and it has conditions, cornerstones, duties, and recommended acts. However, here we are trying to shed light on the great meanings behind all these things, as well as the immense benefits of Hajj. Of course, we cannot mention all the benefits of Hajj, and we will only refer briefly to some of them:
1-    Hijrah (emigration) to Allah The Almighty and His Messenger,

: One of the meanings that is implied in the Hajj journey is emigration to Allah The Almighty and His Messenger,

. The Muslim leaves his money, children, family, work, and country in response to the commandment of His Lord hoping for His Reward and fearing His Punishment, as well as asking for His forgiveness, mercy and bounty. Allah The Almighty described the response of the Muslims to the call to this Hijrah Saying (what means): {And proclaim to the people the Hajj [pilgrimage]; they will come to you on foot and on every lean camel; they will come from every distant pass } [Quran 22:27]
The Muslims come from the four corners of the planet for the Sake of Allah The Almighty alone, fleeing to Him: {So flee to Allah...} [Quran 51:50], and implementing the Hadeeth in which the Prophet,

, said, “…there is no resort and no deliverer from (hardships) except You”. However, the strange thing is that some people go to perform Hajj while being inattentive to this meaning that is implied within that act of worship. It is strange to see a pilgrim with the signs of fatigue of the journey and emigration appearing on him, while he is unable to give up smoking cigarettes. If the pilgrim paid attention to the meaning of emigration in the Hajj, the first thing he would do is desert sins, as “the emigrant is the one who emigrates from what Allah has Forbidden,” or “the emigrant is the one who emigrates from sins.” Neglecting this aspect will most likely deprive the pilgrim from tasting the sweetness of this meaning within this great act of worship.
Allah The Almighty Says about Hijrah, which applies also to Hajj which is a form of Hijrah, (what means): {And whoever leaves his home as an emigrant to Allah and His Messenger and then death overtakes him - his reward has already become incumbent upon Allah} [Quran 4:100]
Abu Hurayrah, may Allah be pleased with him, reported that the Prophet,

, said: “Whoever leaves for Hajj and then died before [performing it], will be granted the reward of the pilgrim until the Day of Judgment.”
Ath-Thahabi

said that he heard the two sons of Al-Mu’ammal ibn Al-Hasan saying, ‘Our grandfather spent three hundred thousand on the pilgrimage in which he died.’ Al-Haakim added, ‘I later accompanied them during the journey of Hajj and we visited the grave of their grandfather at Ath-Tha‘labiyyah. When we reached the grave, we found its tombstone reading: {And whoever leaves his home as an emigrant to Allah and His Messenger and then death overtakes him - his reward has already become incumbent upon Allah}[Quran 4:100]’”