Our Children and the First Ten Days of Thul-Hijjah - I 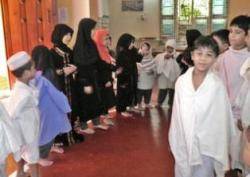 It was narrated that Ibn ‘Umar, may Allah be pleased with him, said, “Discipline your child for you will be asked about him: how you disciplined him and what you taught him. Your child will be asked about being dutiful and obedient to you.” [Ibn Al-Qayyim] Some scholars said, “On the Day of Resurrection, Allah The Almighty will ask parents about [the duties towards] their children before asking the children about [the duties towards] their parents.” [Ibn Al-Qayyim]

The custom of the righteous predecessors in raising their children was to build a sound creed, develop their skills and abilities, fortify them against doubts and desires and prepare them for significant tasks, Sharee‘ah obligations and other good morals. There are texts confirming and explaining this. Ar-Rubayyi‘ bint Mu‘awwith ibn ‘Afraa’, may Allah be pleased with her, said,
“The Messenger of Allah

sent (a person) on the morning of ‘Aashooraa’ to the villages of the Ansaar around Madeenah (with this message): He who got up in the morning fasting (without eating anything) should complete his fast, and he who had his breakfast in the morning, should complete the rest of the day (without food). We henceforth observed fast on it (on the Day of ‘Aashooraa’) and made our children observe that. We made toys out of wool for them and when anyone felt hungry and wept for food we gave him these toys until it was time to break the fast.” [Muslim]
This is how they used to be and this is how we should be with our children during the best days of the year in the month of Thul-Hijjah. The Prophet,

, said: “There are no greater days in the Sight of Allah or on which righteous deeds are more beloved to Allah than these ten days (of Thul-Hijjah). Therefore, during these days frequently say: 'Subhaanallaah, Al-Hamdulillaah, la ilaaha illallaah and Allahu Akbar (Glory be to Allah, all praise be to Allah, there is none truly worthy of worship but Allah and Allah is The Greatest).” [Ahmad]
Ibn Hajar

said, “It is meant that every day of these ten days is better than other days of the year whether or not it is Friday. Friday in these ten days is better than other Fridays during the year because it has both virtues.” [Fat-h Al-Baari]
Do you think it is wise to miss these days without imprinting their effects on our children so they become accustomed to fulfilling acts of worship, obligations, recommended acts, and thus, are raised up as righteous youth having a firm creed, a sound heart, a pure tongue and become good citizens.
To achieve these traits with our children on the greatest days in the sight of Allah The Almighty, we should have plan certain steps for inculcating faith well in advance as a family in order to bring the mercy of The Most-Generous, The Bestower of Blessings. By putting these steps into action, we confirm our drawing closer to them and reaching for sublime goals that everyone seeks to fulfill in life in order to reap their fruits in the Hereafter.
First step: Drawing attention:
This can be achieved by printing the aforementioned Hadeeths which were narrated by Al-Bukhari and Ahmad, and the quote of Ibn Hajar

, and the sayings of the righteous predecessors informed us that these are the greatest days of the year. The Prophet,

, urged us to do righteous acts during these days such as saying 'Allahu Akbar', 'la ilaaha illallaah', and so on. Moreover, they include the Day of ‘Arafah and the Day of Nahr. They include the main acts of worship: Hajj, charity, fasting and prayer. [Nayl Al-Awtaar]
All of this should be introduced in an interesting way that befits the age of the family members and by giving extra attention to the children's level of understanding.
Third step: get to know the actions of the ten days of Thul-Hijjah
Texts of the Quran and Sunnah and sayings of the scholars indicate that it is recommended to do more righteous deeds in these ten days, such as:
First: performing the obligatory prayers in the most perfect manner. To do so, one should offer prayer at its fixed time, go early for prayer, perfect the bowing and prostration and achieve Khushoo‘. ‘Abdullaah ibn Mas‘ood, may Allah be pleased with him, said, “I asked the Prophet

what is the dearest deed to Allah? He said:‘Performing prayer at its due time.’” [Al-Bukhari and Muslim]
Second: drawing closer to Allah through frequent recitation of the Quran, giving charity, supporting the needy, repentance, seeking the forgiveness of Allah, and offering voluntary prayers; the fixed voluntary, Dhuha, Witr and Night prayers. Sa‘eed ibn Jubayr

said, “Do not turn off your lamps in the first ten nights of Thul-Hijjah;” meaning recite Quran and pray during the whole night. [Siyar A‘laam An-Nubalaa’]
Third: fasting as much as possible during these days. This is among the righteous deeds and the most affirmed one is the fasting of the Day of ‘Arafah for those who do not perform Hajj. The Prophet,

, said: “I hope from Allah that fasting the Day of ‘Arafah may expiate the sins of the preceding and the coming years.” [Muslim]
(To be continued)

Our Children and the First Ten Days of Thul-Hijjah - II