Our Children and the First Ten Days of Thul-Hijjah - II 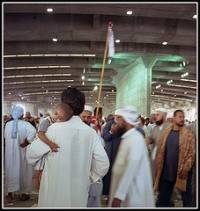 , said: “Therefore, during these days frequently say: 'Subhaanallaah, Al-Hamdulillaah, la ilaaha illallaah and Allahu Akbar (Glory be to Allah, all praise be to Allah, there is none truly worthy of worship but Allah and Allah is The Greatest).”[Ahmad] It is recommended to say these words of remembrance without confining them to any time or place by saying Allahu Akbar at home, in the market, and at work with the exception of times and places during which texts consider Thikr to be disliked. Allah The Almighty Says (what means): {And mention the Name of Allah on known days}. [Quran 22:28]

, said: “The accepted Hajj has no reward but Paradise.” [Al-Bukhari and Muslim] The Prophet,

, said: “The one who performs Hajj without having sexual relations, speaking indecently or acting wickedly, will return (free from sin) as on the day his mother gave birth to him.”[Al-Bukhari and Muslim]
Sixth: sacrificing animals for the sake of Allah The Almighty is among the best acts in these ten blessed days. The Prophet,

, sacrificed two horned rams that were white speckled with black. He slaughtered them with his own hand, said 'Bismillaah' and 'Allahu Akbar', and put his foot on their necks. [Al-Bukhari and Muslim]
Fourth step: (Disciplining; practical side)
1-    Encouraging children to memorize some Thikr to be said during these days and to memorize some texts on the virtues of these days by stressing the spiritual rewards and setting material prizes. This has a great impact on shaping the child’s mind and interests in the future. Ibraaheem ibn Ad-ham

said, “My father said to me, ‘O son, seek the knowledge of Hadeeth. I will give you a dirham whenever you hear and memorize a Hadeeth.’ So, I sought the knowledge of Hadeeth on this basis.” [Sharaf As-haab Al-Hadeeth]
2-    The child will be accustomed to performing and liking acts of worship, and doing these acts will be easy for him when he gets older. This will be normal matter for the child as he sees his parents making practical plans in these ten days by reminding him of the time of prayer, repeating the words of the Athaan, frequently hearing the Name of Allah mentioned in general, accompanying him to distribute charity and supporting the needy, introducing him to the fixed voluntary prayers and their reward and making him accustomed to fast even if for a short time in the day.
3-    Calm family discussions have an amazing effect on the child’s life. If one of these sessions includes explaining the meanings of la ilaaha illallaah, Alhamdulillaah, Allahu Akbar, the Names and attributes of Allah, and the wisdom behind prayer, fasting, supporting the needy, and the effect of the ten days of Thul-Hijjah and the Day ‘Arafah on the slaves of Allah, then, this will inculcate the loving of Allah and His Messenger in his soul. This will make the child attached to his Lord and enable him to grow under the shade of this pure relationship.
4-    Investing the great advantages that the Prophet,

, mentioned in the context of good deeds to be done in these ten days. The Prophet,

, pointed out that Allah The Almighty made these acts of worship means for the slaves to draw closer to Him, increase their good deeds and wipe out their sins. Hence, they will attain Paradise whose width is similar to that of the heavens and the earth. These acts indicate that Allah The Almighty loves His worshipping slaves and that the status of the believer in the sight of Allah The Almighty alone is very great. It is impermissible to frighten a believer, raise a weapon in his face or call each other offensive names. Once ‘Umar ibn Al-Khattaab, may Allah be pleased with him, looked at the Ka‘bah and said, “How great you are! How great your sanctity is! The sanctity of the believer is greater than yours in the Sight of Allah.” [At-Tirmithi]
5-    Sacrificing animals revives the Sunnah of our father Ibraaheem (Abraham), may Allah exalt his mention. It also reminds us of the story of sacrifice and drawing nearer to Allah. It is also one of the acts of the Sunnah that the Prophet,

, guided us to do on the Day of ‘Eed. Parents should relate to their children the story of Prophet Ibraaheem with his son Ismaa‘eel (Ishmael), may Allah exalt their mention. The day Ismaa‘eel was saved from being sacrificed became ‘Eed for Muslims called ‘Eed Al-Adh-ha (Sacrifice) where Muslims slaughter animals for the sake of Allah The Almighty and commemorating this incident. Hence, this story will remain inspiring and effective in the minds and emotions of the child who will empathize with the life of these heroes, act like these honorable characters and develop a broad imagination. Our children are the apple of our eyes and a trust under our responsibility. Under our supervision, they learn the skills that help them fulfill their future roles through either imitation and stimulation, trial and error or habits. It is well-known that a child is influenced by his parents all through his life and the values of parents and siblings are transferred onto the children during the course of everyday activities and events. Therefore, parents should satisfy their children’s needs with a system of values, knowledge, spirituality and skills. Such a system should culminate in making them righteous believers in their Lord and productive members of their societies.

Our Children and the First Ten Days of Thul-Hijjah - I