Recommendations to Pilgrims and Visitors of the Holy Mosque - I 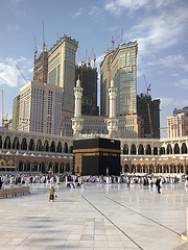 We would like to offer certain recommendations to the pilgrims and visitors of the Holy Mosque in implementation of the Quranic verse in which Allah The Exalted Says (what means): {And cooperate in righteousness and piety} [Quran 5:2]

, said: “Religion is Naseehah (sincere advice), to Allah, His Book, and to the Muslim leaders and the Muslim public.”[Muslim]
Recommendations:
1-    Fearing Allah The Exalted in all conditions and cases. Piety is the source of all good morals and it is one of the Divine recommendations to His Messenger,

, legislated for us.
‘Abdullaah ibn Mas‘ood, may Allah be pleased with him, who was one of the senior scholars of the Companions of the Prophet,

said, “Piety cannot be obtained only through fasting all day and praying all night, and then committing sins in between, but piety can be obtained through keeping away from what Allah The Almighty has prohibited and doing what He has made obligatory. Anything good after that is an additional good.”
The revered Tabi‘ee, Talq ibn Habeeb

said, “Piety is to act in obedience to Allah, on a light (guidance) from Allah seeking the reward of Allah, and to refrain from disobeying Allah, on a light from Allah, fearing His punishment.”
These are precious words and they mean that the Muslim has to learn his religious affairs and know what will make him sinful if he does not know it. In this way, the Muslim will worship Allah The Almighty with insight. This is the practical application of the Two Testimonies of Faith (I bear witness that there is none truly worthy of worship except Allah and that Muhammad is His Slave and Messenger,

, is the Messenger of Allah The Almighty to humankind and the Jinn, in addition to believing in his sayings, adhering to his Sharee‘ah and keeping away from whatever contradicts it. Those two testimonies form the foundation of the religion of Islam. Allah The Almighty Says (what means):
·       {Allah witnesses that there is no deity except Him, and [so do] the angels and those of knowledge - [that He is] maintaining [creation] in justice. There is no deity except Him, The Exalted in Might, The Wise.} [Quran 3:18]
·       {And your god is one God. There is no deity [worthy of worship] except Him, The Entirely Merciful, The Especially Merciful.} [Quran 2:163]
·       {Say, [O Muhammad], "O mankind, indeed I am the Messenger of Allah to you all, [from Him] to whom belongs the dominion of the heavens and the earth. There is no deity except Him; He gives life and causes death." So believe in Allah and His Messenger, the unlettered prophet, who believes in Allah and His words, and follow him that you may be guided.}[Quran 7:158]
2-    All pilgrims and visitors to the Holy Mosque, as well as all Muslims, are advised to observe the five daily prayers on time. Every Muslim must revere these prayers and perform them tranquilly, because they constitute the greatest pillar of Islam after the Two Testimonies of Faith. They represent the post of Islam and the first thing about which the Muslim will be reckoned. Whoever leaves the daily five prayers is a disbeliever. Allah The Almighty Says (what means):
·       {And establish prayer and give Zakah and obey the Messenger - that you may receive mercy.} [Quran 24:56]
·       {Maintain with care the [obligatory] prayers and [in particular] the middle prayer and stand before Allah, devoutly obedient.} [Quran 2:238]
·       {Certainly will the believers have succeeded: * They who are during their prayer humbly submissive}[Quran 23:1-2]
·       {And they who carefully maintain their prayers - * Those are the inheritors * Who will inherit al-Firdaws. They will abide therein eternally.}[Quran 23:9-11]
The Prophet,

, said:
-      “Between a man and disbelief and Shirk is the abandonment of prayer.”[Narrated by Muslim in the chapter of “Calling the One who leaves the prayer a disbeliever”]
-      “That which differentiates us from the disbelievers and hypocrites is our performance of prayer. He who abandons it, becomes a disbeliever”[Ahmad, Abu Daawood, An-Nasaa’i, At-Tirmithi, and Ibn Maajah]
-      “Whoever observes prayer (punctually fulfilling its conditions), it will be light, evidence, and salvation for him on the Day of Resurrection; but whoever does not, it will not be for him light, evidence, or salvation; and on the Day of Resurrection, he will be associated with Qaaroon, Pharaoh, Haamaan, and Ubayy ibn Khalaf (a great enemy of Islam from among the Quraysh).” [Ahmad]
Some scholars interpreted this Hadeeth saying,
"The person who abandons prayer will be raised with such a foursome because his neglect of prayer may be due to his preoccupation with his property, his presidency, his work, or his trade. Hence, if he was preoccupied with his property, he will be resurrected with Qaaroon; if with his position as a leader, then he will be resurrected with Pharaoh; if with his work, then with Haamaan; and if with his trade, then with Ubayy ibn Khalaf, the trader among the disbelievers of Makkah."

Recommendations to Pilgrims and Visitors of the Holy Mosque - II