The Muslim Family at Hajj 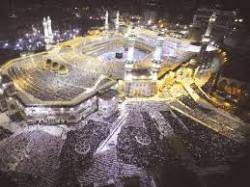 Allah The Almighty made Hajj obligatory and one of the pillars of Islam which He approved as a religion for humankind. This rite entails great wisdom, lessons, admonition, purification, exclusive instructions, interesting benefits and amazing scenes. Hajj is the unique journey in which the Muslim travels with his heart, body and property to the Secure Land to beseech the Lord of the Worlds, seeking Forgiveness and repentance from Allah, the Lord of all creation, the heavens, the earth and the Great Throne.

Brother and sister,
Have you smelled any fragrance sweeter than the dust of those who are dressed in the Ihraam garment? Have you seen clothes more honorable than those of pilgrims for Hajj and ‘Umrah? Have you seen heads more noble than those who shave and shorten their hair? Have any delegates more dignified than those who make Tawaaf (circumambulation) passed by you? Is there any sound nicer than the Talbiyah and the cries of repentant and humble people?
What an awe-inspiring scene! What a great walk towards the All-Living, the Sustainer of Existence of those who yearn for repentance and returning to Allah hoping for Paradise and Forgiveness!
The pilgrims have come to declare disassociation from polytheism, polytheists, bloodshed and usurped properties. They celebrate the best words said by all the Prophets: la ilaaha illallaah (none is truly worthy of worship but Allah) declaring Allahu Akbar (Allah is The Greatest) upon spilling the most valuable and purified blood of sacrificed animals for the Sake of Allah.
The pilgrims recall the memories of their leader from whom they learned their rituals. In that place, they follow the instructions of the Prophet,

, as if they were seeing him leading this large crowd of people. Allah The Almighty lit peoples’ minds by his Prophet,

, removed shackles from them and wiped out sins and misdeeds. He is the chosen last Prophet Muhammad,

. He is the best person who performed the rituals of Hajj. Look at his steps while he is moving between the places of rites chanting "Labbayka Allahumma Labbayk, Labbayka la Shareeka laka Labbayk, Inna Al-Hamda wan-Ni‘mata laka wal-Mulk La Shareeka Lak. (O Allah! I hasten to You. You Have no partner. I hasten to You. All praise and grace belong to You and Sovereignty too; You Have no partner)".
The Muslim during Hajj:
Dear Muslim, mentor, and caretaker of a Muslim home,
Be submissive in your Hajj following the example of your Prophet,

, in obedience to him. Have you not heard the Hadeeths of the Prophet,

:
Dear brother,
Perhaps if you take care to remain true to the spirit of sincere submission, surrender, submissiveness, steadfastness and avoidance of dispute, it would result in the honor of seeing Allah The Almighty on the Day of Judgment. Allah The Almighty Says (what means): {For them who have done good is the best [reward] and extra.} [Quran 10:26] The best reward here means Paradise and the 'extra' means seeing Allah The Almighty. This also results in obtaining the company of the Prophet

. Ibn Mas‘ood, may Allah be pleased with him, said, “O Allah, I ask You for Faith that does not regress, endless pleasure and accompanying Prophet Muhammad in the highest places of Paradise, the Paradise of eternity.” [Ahmad: Saheeh]
Dear pilgrim,
Remember the day on which Allah The Almighty perfected His Grace upon the believers and completed their religion for them and Revealed the verse (which means): {This day I have perfected for you your religion and completed My favor upon you and Have Approved for you Islam as religion.}[Quran 5:3] ‘Umar, may Allah be pleased with him, said about this verse, “I know where it was revealed. It was revealed while the Prophet

was standing at ‘Arafah on a Friday.” [Al-Bukhari]
Wakee‘

said,
“When this verse was revealed on the greater day of Hajj, ‘Umar cried. The Messenger of Allah

asked him: “Why are you crying?” ‘Umar said, “O Messenger of Allah, I cried because we were increasing in our religion. When something is completed; there is nothing that is completed but it starts to decrease.” The Prophet

said: “You are right.”
‘Umar, may Allah be pleased with him, had a believing soul that was endowed with great insight. The Prophet,

was amazed at the sound understanding of ‘Umar, may Allah be pleased with him, and approved it. The decrease was the death of the Messenger, the conveyer of this message and this religion. According to Ibn Jareer

, died eighty-one days after the revelation of this verse.
Dear pilgrim,
Be merciful to your wife if she is accompanying you in Hajj and be gentle and kind to her. ‘Aa’ishah the Mother of the Believers, may Allah be pleased with her, performed Hajj with the Prophet,

. One day, she entered upon him crying for having missed the ‘Umrah because of having her menses that prevented her from performing Tawaaf. The Prophet,

soothed her and treated her with kindness so that she would return from her Hajj pleased. The Prophet,

, ordered her brother ‘Abdur-Rahmaan to accompany her to At-Tan‘eem to assume Ihraam for a new ‘Umrah from there. This reflects her love for acts of worship and her keenness on performing them. She was so sad that the people would return after performing Hajj and ‘Umrah while she would return having performed Hajj only.