The Muslim Woman at Hajj 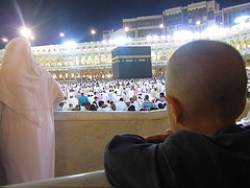 The rites of Hajj include many actions that commemorate women. For example, Sa‘y between As-Safa and Al-Marwah commemorates what our mother Haajar, may Allah exalt her mention, did. Zamzam water gushed forth from the earth by the mercy of Allah The Almighty in response to her supplications to Allah The Almighty in order to quench her and her son’s thirst.

Dear sister,
O you who has left for the Sacred City to perform one of the pillars of Islam; as you were treading the earth of Makkah, did you not recall the bright image of that believing woman who was so confident and had perfect trust in her Lord? Ibraaheem (Abraham), may Allah exalt his mention, brought Haajar and her suckling son Ismaa‘eel (Ishmael), may Allah exalt their mention, to the desert area at the Sacred House where there was neither water nor any people around. Ibraaheem, may Allah exalt his mention, left them with nothing but a bag of dates and a water-skin and then he went away. Haajar followed him saying, “O Ibraaheem, where are you going? Are you leaving us in this valley which has no humans or anything?” She repeated her question many times, but he did not look back. She said, “O Ibraaheem, did Allah order you to do so?” He said, “Yes.” Thereupon, she said her eternal illuminating words, “Then, He will never fail us.” Do you see the firmness of her faith, the power of her trust in Allah, her reliance on Him and submission to Him?
O Muslim sister, did you not recall the bright image of Khadeejah, the Mother of the Believers, may Allah be pleased with her, while she was anxiously following the course of the call to Islam and the fruits of the message?
Do you not see in your imagination a glimpse of Asmaa’ bint Abi Bakr, may Allah be pleased with her, the young woman with the two girdles, who used to walk for long distances under the scorching heat of the sun carrying food from Makkah to the Cave of Thawr, the hideout of the Messenger of Allah,

in the Farewell Hajj? She narrated that she and her sisters among the Companions used to uncover their faces during Ihraam and used to cover their faces whenever non-Mahram men passed by them. Did you not remember this and follow her example? Sister, you do not want to come to Hajj seeking forgiveness only to become an aide to Satan in tempting the believers with your unveiled beauty. Let it not be the case that while people return with forgiven sins, you return with accumulated sins, Allah forbid! You should be far above such faults as you are one of the modest, bashful and chaste women.
Dear sister, it is permissible to take your children with you in Hajj if there is need to do so. Ibn ‘Abbaas, may Allah be pleased with him, narrated that a woman came to the Prophet

raised a boy to him and asked him, “Can the Hajj of this young boy be accepted"?” The Prophet

said:“Yes, and you will be rewarded.”[Muslim]
Another narration reads that the Messenger of Allah,

was at Ar-Rawhaa’ and met a caravan and greeted them. He asked them:“Who are you?”They said, “We are Muslims. Who are you?” The people said, “This is the Messenger of Allah

.” Consequently, a woman rushed to her Howdah and took the hand of her little boy and asked, “Can this young boy perform Hajj?” The Prophet,

, said:“Yes, and you will be rewarded.” [Abu Daawood: Saheeh]
The Muslim youth at Hajj:
Many people postpone the obligation of Hajj until they become grey-haired. They view it improper to perform Hajj while they are young, if they consider performing Hajj in the first place. However, the youth among the righteous predecessors used to hasten to perform this ritual during their youth and strength.
Saalim

saying, “I want to go in this direction - meaning Hajj.” The Prophet,

walked with him and said:“O boy, may Allah provide you with piety, direct you to goodness and suffice your concerns!”When the boy returned and greeted the Prophet

, raised his head and said:“O boy, your Hajj is accepted, your sins are forgiven and your expenditure is compensated.” [Ibn Khuzaymah and At-Tirmithi: Hasan Ghareeb]
Anas, may Allah be pleased with him, narrated that a man came to the Prophet,

, and said, “O Messenger of Allah, I want to travel so provide for me.” The Prophet,

said:“May Allah provide you with piety, forgive your sins and facilitate goodness for you wherever you are.” [At-Tirmithi; Al-Albaani: Saheeh]
When the Prophet,

, reached Madeenah during Hijrah, Muhammad ibn Anas Ath-Thafri, may Allah be pleased with him, was two weeks old. The Prophet,

, wiped his head. Later, when this child was ten years old, he joined the Prophet,

, in the Farewell Hajj.