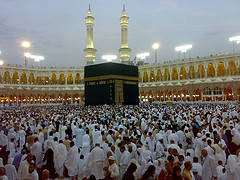 The numbered days are the 11th, 12th, and 13th of Thul-Hijjah, which are known as the days of Tashreeq. They were called “Days of Tashreeq”; because people used to slice the meat into strips and dry them in the sun so that it would not spoil when they stored it and they would feed on it during their return journey to their families after performing Hajj. The days of Tashreeq are the three days following the day of An-Nahr (the first day of ‘Eed Al-Adh-ha).
1-    The first day: the 11th of Thul-Hijjah, which is called the Day of Qarr (the Day of Settlement) as the pilgrims settle in Mina. They do not consider going back to their families as they have not carried out all the due rites. It was also called the Day of Ar-Ru’oos (the Day of Heads) because some pilgrims would eat the heads of the sacrificial animals and slice the meat into strips to dry them in the sun.
2-    The second day: the 12th of Thul-Hijjah, which is called the First Day of Nafr (departure). The day that follows the day of Al-Qarr (the 11th of Thul-Hijjah) is called day of An-Nafr in which pilgrims depart from Mina, whereas the second day of An-Nafr is the 13th of Thul-Hijjah, the last day of the days of Tashreeq. It is allowed for the pilgrims who had thrown the pebbles after noon time to go from Mina to Makkah before sunset of that day and perform Tawaaf Al-Wadaa' (Farewell Tawaaf) and then return to their countries.
3-    The third day: the 13th day of Thul-Hijjah is called “The second day of Nafr”. It is better for the pilgrims who can stay in Mina for the rest of the 12th day of Thul-Hijjah and the night of the13th day, then throw the three pebbles after noon time of the 13th day, leave Mina and go to Makkah in order to perform the Tawaaf Al-Wadaa‘ and then return to their countries.
Hence, these are the numbered days, the Days of Tashreeq, which are the three days after the Day of Nahr. The Day of Nahr is not one of the numbered days, as some people may mistakenly believe.
Thikr (words of remembrance of Allah The Mighty) on these days can be of many types:
1-    Tasmiyah [saying: in the name of Allah The Entirely Merciful The exceptionally Merciful] and Takbeer while slaughtering the Hady (livestock: camel, cow or sheep). The pilgrims can slaughter the Hady on all these days and their nights until sunset of the 13th day of Thul-Hijjah.
2-    Thikr while throwing the pebbles on these three days after noontime. Whoever cannot throw the pebbles in the daytime can throw them at night for the past day not the coming one, according to the majority of scholars.
3-    Takbeer, which is not restricted to a specific time, according to the majority of scholars, whereas for non-pilgrims, it is prescribed after prayers according to a group of scholars. The Companions, may Allah be pleased with them, used to raise their voices with Takbeer on these days in Mina so that the mountains would shake with the echo of their voices.
4-    Allah The Exalted Says (what means): {Then whoever hastens [his departure] in two days – there is no sin upon him…}[Quran 2:203] This means that there is no blame on the pilgrim if he hastens to proceed from Mina and return to his country on the 12th day of Thul-Hijjah after throwing the pebbles after noontime and after performing Tawaaf Al-Wadaa‘. It is lawful for the pilgrims to do so, as long as they fear Allah The Exalted and carry out the rites as due, and fear Allah in adhering to His orders and avoiding His Prohibitions. The Prophet

deemed it lawful for the pilgrims to leave Mina on that day.
5-    Allah The Exalted Says (what means): {…and whoever delays [until the third] – there is no sin upon him…} [Quran 2:203] This means that it is lawful for the pilgrim to delay throwing the pebbles, stay in Mina on the 13th day of Thul-Hijjah and throw the pebbles after noontime of the 13th day of Thul-Hijjah and then leave Mina. This is even more favorable and rewardable as it is what the Prophet