The Shining Aspects of Hajj - I 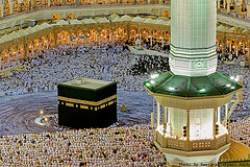 Allah The Almighty has imposed these rituals upon His slaves out of mercy to them. Human beings are not created without purpose and they will not be left neglected. Rather, one is created for a specific job in this world for which he/she is responsible and it will be the basis of reckoning before Allah The Almighty on the Day of Resurrection. Man is created to fulfill a specific role in this worldly life while undergoing different types of trials and tests. One does not depart this world unless he has his sustenance, age and trial fulfilled. Allah The Almighty Says (what means):
· {Blessed is He in whose hand is dominion, and He Is over all things competent -[He] who created death and life to test you [as to] which of you is best in deed - and He is The Exalted in Might, The Forgiving.} [Quran 67: 1-2]
· {It is He who created you from clay and then decreed a term and a specified time [known] to Him; then [still] you are in dispute.} [Quran 6: 2]
Jaabir ibn ‘Abdullaah, may Allah be pleased with him, narrated that the Prophet,

, said: "O people, fear Allah and ask (His bounties) in a graceful manner and moderately, for a man will not die unless he is provided with full sustenance (decreed) for him even if it is delayed. So, fear Allah and ask (His bounties) in a graceful manner and moderately. Take whatever is lawful and leave whatever is unlawful." [Ibn Maajah]
Meanwhile, Allah The Almighty has provided man with countless favors in order to fulfill the role for which he has been created. One of the most important favors is the rituals of worship, which Allah The Almighty has imposed upon His slaves out of mercy to them. These rituals are in fact firmly connected and coherent to other religious obligations that are based on them. Without these rituals, one cannot fulfill the role for which he has been created. Allah The Almighty Says (what means):
· {And He gave you from all you asked of Him. And if you should count the favor of Allah, you could not enumerate them. Indeed, mankind is [generally] most unjust and ungrateful.} [Quran 14: 34]
· {Do you not see that Allah has made subject to you whatever is in the heavens and whatever is in the earth and amply bestowed upon you His favors, [both] apparent and unapparent? But of the people is he who disputes about Allah without knowledge or guidance or an enlightening Book [from Him].}[Quran 31: 20]
These rituals are in fact sources of energy to provide man with enough determination and strength to fulfill his covenant with Allah The Almighty and worship Him, bear the trust, assume succession on earth, and reform the earth by spreading the Islamic faith and monotheism. This also helps man to fulfill other religious obligations which are based on this firm foundation, the two testimonies and rituals.
With each religious ritual the believer fulfills, he is provided with power and strength to wipe out sins and misdeeds. The effect of this energy and power increases when all the rituals are active in the believer's life while they are firmly connected to the two testimonies of faith, which are the source of faith, Islamic monotheism, purity of intention and dedicating it for the sake of Allah The Almighty.
Intention should be dedicated solely for the sake of Allah The Almighty in all religious rituals and righteous deeds which the believer does. The importance of this is clear when we realize that a sound intention awakens the heart and beautifies the soul. One's intention perfects this awakening and beautification when it determines the believer's goal and purpose as well as the road that leads to them.
Keeping this idea in mind, the believer comes to perform Hajj with this vigilant and watchful intention. He realizes that Hajj is a ritual which is firmly connected to other religious rituals and intention and that it is an obligation imposed by Allah The Almighty out of His bounty and mercy to help man to fulfill the trust, worship as well as the task for which he has been created. Allah The Almighty Says (what means): {And [due] to Allah from the people is a pilgrimage to the House - for whoever is able to find thereto a way. But whoever disbelieves - then indeed, Allah is free from need of the worlds.} [Quran 3: 97]
Thus, denying the obligation of Hajj is an act of disbelief. Denial in fact wastes the energy which man needs to fulfill his task and trust. Each religious ritual is an important source of energy for man. The obligation of Hajj is a great source of energy for the believers.
These religious rituals were practiced and preached by all past prophets and messengers, may Allah exalt their mention, since their religion is one, which is Islam. They, along with other believers, went to Hajj in order to be provided with power and determination, seek its bounties, witness benefits for themselves, remember Allah The Almighty and supplicate persistently. They did that in order to be provided with enough power and energy to support them in their life in order to fulfill the covenant, trust, worship and succession on earth. They could not fulfill these tasks without having enough power and energy.
Let us know the call of Allah The Almighty to Ibraaheem (Abraham), may Allah exalt his mention. In the Quran, Allah The Almighty Says (what means): {And proclaim to the people the Hajj [pilgrimage]; they will come to you on foot and on every lean camel; they will come from every distant pass - That they may witness benefits for themselves and mention the Name of Allah on known days over what He has provided for them of [sacrificial] animals. So eat of them and feed the miserable and poor.} [Quran 22: 27-28]
In this way, Hajj makes all people equal before Allah The Almighty, despite their different levels. The rich among them gives to the poor, and thus the poor person enjoys the protection of all Muslims, who maintain his right and so they eat and feed those who are destitute. This relationship continues during Hajj and lasts thereafter. Actually, Hajj bears endless lessons and admonishments. The noble verses in Chapter Al-Hajj continue to mention the favors and bounties of Allah The Almighty over His believing slaves while they are under the shade of forgiveness and mercy. Allah The Almighty Says (what means): {That [has been commanded], and whoever honors the sacred Ordinances of Allah - it is best for him in the sight of his Lord. And permitted to you are the grazing livestock, except what is recited to you. So avoid the uncleanliness of idols and avoid false statement.} [Quran 22: 30]
Then the noble Chapter shows the qualities of the believers who come to perform Hajj. Allah The Almighty Says (what means): {Who, when Allah is mentioned, their hearts are fearful, and [to] the patient over what has afflicted them, and the establishers of prayer and those who spend from what We have provided them.} [Quran 22: 35]

The Shining Aspects of Hajj - II