The Shining Aspects of Hajj - II 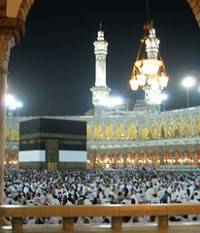 In Chapter Al-Baqarah, Allah The Almighty Says (what means): {Hajj is [during] well-known months, so whoever has made Hajj obligatory upon himself therein [by entering the state of Ihraam], there is [to be for him] no sexual relations and no disobedience and no disputing during Hajj. And whatever good you do - Allah Knows it. And take provisions, but indeed, the best provision is fear of Allah. And fear Me, O you of understanding.} [Quran 2: 197]

These qualities should be deep-rooted in the heart so that pilgrims can reap the fruits of Hajj and its blessings as well as the fruits of all other rituals. Pilgrims should take all necessary provisions; and the best provision is fear of Allah The Almighty, Who Says (what means): {And take provisions, but indeed, the best provision is fear of Allah. And fear Me, O you of understanding.} [Quran 2: 197]
Through the verses of Hajj in Chapters Al-Baqarah, Aal ‘Imraan and Al-Hajj, we realize how the obligation of Hajj is firmly connected to other rituals as well as the two testimonies of faith. They are all a great and indispensable source of energy for the believer and a great favor from Allah The Almighty which makes the believer determined and galvanizes him so he can fulfill the task for which he has been created. This, as well as other divine obligations based on these pillars, the two testimonies of faith and other religious rituals. That was the role of Hajj in building souls, hearts and determination during the lifetime of the Last of all the prophets,

. Today, we need to restore the process of building, in a perfect and complete manner, in order to rebuild the believing generation with all its divine qualities, so that Allah The Almighty may grant us victory.
Our status quo imposes on us to use Hajj, as well as other rituals, as a means of obtaining spiritual power and energy for awakening. Thus, the Muslim realizes that fulfilling religious obligations does not mean doing them and then remaining in the house or chasing the perishable pleasures of the worldly life while neglecting other divine obligations that are based on these rituals.
After performing the obligation of Hajj, many pilgrims are preoccupied with the worldly life as well as its fancies and temptations while forgetting the task for which they have been created.
The believers perform Hajj in order to be one nation during and after the Hajj season. So, whoever has made Hajj obligatory upon himself therein (by entering the state of Ihraam), there is no sexual obscenity and no disobedience and no disputing during Hajj. Rather, there are mercies descending on the slaves, remembrance of Allah The Almighty and supplication.
When we reflect on the reality of Muslims today, we realize that it is our duty to boost and inculcate the right intention in order to increase awareness, alertness and spiritual beauty. This righteous intention contributes to achieving awareness of the essence and sought-after goals of Hajj as a source of energy and power reminding man of his responsibility for which he will be reckoned before Allah The Almighty on the Day of Resurrection. Abu Hurayrah, may Allah be pleased with him, narrated that the Messenger of Allah,

, said: "Whoever performs Hajj, during which he neither has sexual activity (with his wife) nor commits sins, he will return (as sinless) as a newborn child on the very day his mother delivered him." [Saheeh Al-Jami‘ As-Sagheer]
Hajj is a source of energy for building, bringing up and preparation. It is a source of energy for purifying and refining the soul. It is a source of energy for giving Da‘wah, proclaiming Islam and reminding people. Hajj prepares the Muslim to move in order to fulfill his responsibilities, not to incline to comfort and the perishable pleasures of the worldly life.
After performing the obligation of Hajj, some Muslims today return to their homes and worldly affairs while forgetting about their responsibilities and leaving the battlefield open before the enemies of Allah The Almighty. When adversities and crises fall, as decreed by Allah The Almighty because of what the hands of people have earned, they start to exchange blame.
Hajj is a great opportunity which Allah The Almighty has made easy for the believers, so that their gatherings meet in order to reflect on themselves as well as their reality and responsibility. The scholars and callers to Allah The Almighty also meet and reflect, for they are the sought-after role models to fulfill the trust which they bear during these hard times when the Muslim Ummah (nation) suffers from the crises of disunity, humiliation and disgrace. Scholars are the worthiest among people to say the word which gathers the Ummah on the truth, guides people to the straight path which Allah The Almighty commands to be followed and takes them to the divine goals and obligations which lead to this, just as it is stated by the Quran and the Sunnah.
Writers should reflect on their message and realize whether they have fulfilled the trust and contributed to protecting the Ummah and supporting the religion of Allah The Almighty. Thinkers, politicians, economists and specialists in other fields should reflect whether or not they have fulfilled the truth and perfected their covenant with Allah The Almighty.
From amid the pains, blood and corpses in Palestine and many other Muslim lands, the shining aspects of Hajj set out in order to awaken hearts, boost determination within the souls and restore the Ummah's former state of brotherhood for the sake of Allah The Almighty, which gathers and unites.
O Muslims! You are one nation, carrying the same message and trust and you will be held responsible for that before Allah The Almighty on the Day of Resurrection, when wealth and children will be of no avail.
Muslim should stop now to take themselves to account before it is too late. The worldly life is man's last chance to reform himself and turn in repentance to Allah The Almighty. Muslims should hasten to this stop during the blessed days of Hajj, take themselves to account and study their reality through the methodology of Allah The Almighty. Thus, they can know their mistakes and rectify them and repent. Hajj is an opportunity for admonishing and reminding those whom Allah The Almighty wants to be guided. Allah The Almighty Says (what means): {And turn to Allah in repentance, all of you, O believers, that you might succeed.} [Quran 24: 31]

The Shining Aspects of Hajj - I