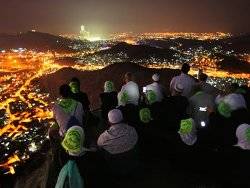 5.     Getting used to Du‘aa’
The Hajj trip is a great opportunity for Du‘aa’ and supplicating Allah The Almighty as pilgrims have many merits that make their Du‘aa’ more likely to be answered. This is because pilgrims supplicate during honored days and at honored places. Moreover, supplicating while performing Hajj makes this supplication more likely to be answered as there are many rites during which Du‘aa’ is permitted such as Tawaaf, Sa‘y, standing at ‘Arafah, at Al- Mash‘ar Al-Haraam, after throwing the Sughra Jamrah (smallest pillar) and the Wusta Jamrah (middle pillar). All these rites are times when Du‘aa’ is worthier of being answered and this makes the believer get used to invoking Allah The Almighty frequently in the future.
6.     Getting used to expecting relief
When pilgrims see the crowd during Tawaaf, Sa‘y and throwing the pebbles, they think that these groups would never separate and that they would not be able to complete their Sa‘y, Tawaaf and throwing the pebbles. They might feel angry and upset and even intend not to perform Hajj after this year. Then after a while, the groups of people separate and the rites are performed easily.
This is a great lesson that teaches the pilgrims the servitude of waiting for relief, which is one of the greatest types of servitude and the acts that bring the slave closer to Allah The Almighty. This teaches pilgrims never to despair of relief from Allah The Almighty regardless of how difficult the matter is and regardless of the gravity of the situation. Muslims should have good expectations regarding their Lord and wait for Him to provide relief.
7.     Acquiring good morals
Hajj is a practical field where pilgrims are trained to be tolerant, patient, and restrain their anger which is caused by the crowd of people, tiredness and fatigue either on the way to Hajj or during Tawaaf (circumambulation), Sa‘y, throwing pebbles, or any other rites. Pilgrims endure tiredness because they know that Hajj is performed during a limited number of days and they do not wish to nullify their Hajj by giving free rein to their evil desires. They also know that pilgrims are the guests of The Merciful so, honoring them and being patient with what some of them do is a sign of glorifying Allah The Almighty.
When pilgrims get used to enduring these hardships during the Hajj days, they would maintain good morals during the rest of their lives.
Pilgrims learn to be generous, righteous and merciful, and to favor other people as they experience wonderful situations that embody these meanings. They see generous people who spend on the poor, noble ones who forgive people who abused them, merciful ones who treat poor people gently, tolerant people who endure harm, people who are dutiful to their parents as well as those who are kind with their old mothers.
Pilgrims acquire good morals when they see those people who do not realize the true meaning of Hajj and get angry for any trivial reason. When wise people see such situations, they abandon anger and avoid bad morals.
8.     Muslim brotherhood
During Hajj, pilgrims have one Qiblah and one Lord. They share the same feelings, clothing, rites and times. This makes them feel that they are brothers who know each other and are willing to cooperate in the fields of life and religion.
9.     Establishing the servitude of fearing Allah
Pilgrims perform Tawaaf (seven circumambulations of the Ka‘bah), perform Sa‘y (seven circuits between Safa and Marwah), throw the seven pebbles, stand at ‘Arafah at a certain time and leave it at a certain time, then stay at night in Muzdalifah and so forth.
You can never find a pilgrim who performs more or less than what is required or performs any of the rites at different times than those specified or intentionally does any of the prohibitions that must not be done during Ihraam.
Why is this? Because he does not want to nullify his Hajj and he knows that Allah The Almighty sees him.
This is a great lesson that teaches Muslims to fear Allah The Almighty and know that He sees them all the time as the One Who monitors Hajj, monitors all other deeds as well.
(To be continued)