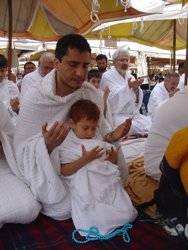 10.                        Getting used to utilizing time
Time is the capital of humans and it is the greatest thing that should not be wasted or neglected.
During Hajj, pilgrims do great deeds in a period of time that might not exceed four days in different places that are far from each other and crowded.
This shows that humans have great potential and latent energy that, if utilized, would yield its fruits in double or even more than this.
This is a great lesson for Muslims that teaches them to get used to utilizing time and not wasting it.
11.                        Stirring up the servitude of praising Allah
A pilgrim sees the sick, the physically and visually challenged people and those who have lost their limbs, and thanks Allah The Almighty for granting him health.
He sees the crowds of people sitting on the ground to the extent that one might not find a place to sit, so he remembers the spacious place where he lives and thanks Allah The Almighty for this.
A pilgrim also sees the poor and the needy who do not have what is sufficient for them so he praises Allah The Almighty for granting him money and wealth.
He praises Allah The Almighty for making Hajj easy for him and for helping him perform the rites while many other Muslims long for Hajj but cannot perform it.
He also thanks Allah The Almighty for making him a Muslim and this makes him adhere to Islam as this is an invaluable bounty.
This is how the slavery of praising Allah The Almighty is achieved in Hajj.
12.                        Remembering the Hereafter
When a pilgrim sees the crowds of people surging over each other at one place while wearing the same type of clothing, uncovering their heads and wearing only Izaar (lower sheet) and Ridaa’ (upper sheet) while abandoning the pleasures of the worldly life, he will remember the Day of Judgment and thus, will prepare himself for the Hereafter as he will look down upon the joys of life and disdain indulging in its pleasures.
13.                        Getting used to resisting the devil
The devil is a clear enemy to man and Allah The Almighty warned us of him and ordered us to take him as an enemy and never to follow his footsteps. Hence, resisting the devil is among the acts that satisfies Allah The Almighty.
This matter becomes clear during Hajj; especially while throwing the pebbles, as pilgrims do not throw pebbles at the devil as he is not standing over there in person. However, they throw pebbles at the same places where the devil came to their father Ibraaheem, may Allah exalt his mention, and he threw pebbles at him. Pilgrims throw pebbles in order to learn the lesson and realize that Ibraaheem, may Allah exalt his mention, knew that the one who was preventing him from obeying the Orders of Allah The Almighty was the devil as he was embodied for him three times to prevent him from slaughtering his son and Ibraaheem, may Allah exalt his mention, threw seven pebbles at him three times and told him, “You will be thrown by me.” Thus, the devil was disappointed and turned on his heels.
People of understanding learn the lesson and realize the wisdom of throwing the pebbles and apply this when dealing with every devil from humankind and Jinn who want to prevent them from obeying Allah The Almighty. They detest such devils, disobey, resist and keep away from them as well as seek refuge with Allah The Almighty from them.
People of understanding know that anyone who tries to avert them from the way of Allah The Almighty or cause Fitnah (trial) is a devil regardless of their appearance and behavior.
How abundant are the lessons of Hajj and how great are its blessings! Hence, we must try to get as much of this as we can in order to gain happiness in this life and the Hereafter and to be among the Party of Allah The Almighty, as those (the party of Allah) are indeed the successful ones and no fear will there be concerning them, nor will they grieve in this life and the Hereafter.