The Rituals of Hajj: Symbols of Tawheed - I 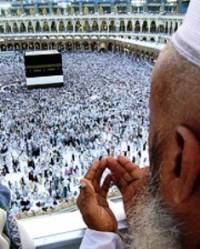 In Islam, the greatest obligation placed upon every human being is Tawheed (to have belief in the oneness of Allah The Almighty, and to act in accordance to it). Tawheed helps one attain felicity in this life and the Hereafter; without it, one’s lot will be misery and hardship. At no stage of the Prophet’s,

, mission did he stop calling to Tawheed and waging war against Shirk (polytheism) and its manifestations. All five pillars of Islam confirm the importance of Tawheed and embody it, for it is the root of these pillars.

Hajj is a great symbol of the actualization of Tawheed in one’s worship, direction and aim. Allah The Almighty Says: {And for every nation We have appointed religious ceremonies, that they may mention the Name of Allah over the beast of cattle that He has given them for food. And your Ilaah (God) is one Ilaah, so you must submit to Him alone (in Islam). And (O Muhammad!) give glad tidings to the Mukhbitin (those who obey Allah with humility and are humble from among the true believers of Islamic Monotheism).} [Quran, 22: 34]
Some examples of this are found in the rituals of Hajj:
·        The Prophet,

, that during his Tawaaf he only touched Ar-Rukn Al-Yamaani (the Yemeni Corner) and Al-Hajar Al-Aswad (the Black Stone). However, if the pilgrim finds it difficult to touch them he should point to the Black Stone and say, “Allahu Akbar” once as he passes by it. As for the YemeniCorner, he should not point to it if he cannot touch it. This is done in order to come closer to Allah, and carry out His commandments. Allah says:{So let them worship the Lord of this House.}[Quran, 106: 3]
·        The Prophet,

, also said: “Circumambulation of the House; running between Safa and Marwa, and casting the pebbles is only ordained for establishment of the remembrance of Allah.”These rites were performed by the Prophet,

, solely for the purpose of worshipping Allah The Almighty, and not for the purpose of seeking blessings therefrom. That is why ‘Umar may Allah be pleased with him, said when kissing the Black Stone, “By Allah! I know that you are only a stone. You neither benefit nor harm. If it were not that I saw the Prophet kissing you, I would not have kissed you.” [Al-Bukhari, Muslim]
·        Scholars have agreed that it is not permissible to touch or kiss other than what is reported in the Sunnah that the Prophet,

has touched or kissed. Al-Athram, a companion of Imaam Ahmad

said, “I saw that people of knowledge among the inhabitants of Madeenah did not touch the Prophet’s grave; they would only stand at a corner and say their salaam to him.” Abdul-Hasan said, “Under Islamic law, the touching and kissing of graves are regarded to be abominable innovations.” He further said, “The Khuraasaani jurists said, “Graves should not be rubbed, kissed or touched for that is the practice of Christians.” At-Tahaawi, a Hanafi scholar said, “Graves should not be touched nor kissed for that is the custom of the People of the Book.” In Islam, nothing is known to be touched except Al-Hajar Al-Aswad and the Yemeni Corner.
(To be continued…)

The Rituals of Hajj: Symbols of Tawheed - II