When Believers are Honoured and Satan is Humiliated 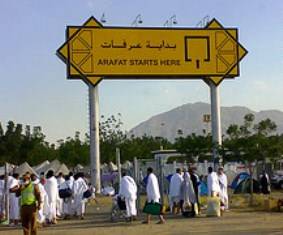 Iblees (Satan) is frustrated in his endeavours to misguide humankind on numerous occasions. Yet, the bitterness, rage and humiliation he undergoes on the Day of 'Arafaatis unmatched,except perhaps with his abject humiliation on the occasion of the Battle of Badr.Seeing the mercy of Allah The Almighty and His forgiveness descending upon the believers on this day, he laments his own fate.

Al-‘Abbaas ibn Al-Midraas, may Allah be pleased with him, said,
“The Prophet

supplicated abundantly for the forgiveness and mercy of his Ummah (nation) on the night of ‘Arafaat … the next day he did the same in Muzdalifah. The Prophet

smiled when he finished. Some of the Sahaabah (Companions) asked, “May my father and mother be sacrificed for your sake, you smiled at a time which you never smiled previously, may Allah always make you happy, what made you smile?” He said:“I smiled because of the predicament of Satan, the enemy of Allah. After Allah accepted my supplications for my Ummah and forgave those who transgressed against themselves. Satan started pouring soil upon his head and crying out for his own destruction, so I smiled at his grief.”[Ahmad]
Abu Hurayrah, may Allah be pleased with him, narrated that the Prophet,

, said: “Allah has divided Mercy into one hundred parts; He kept ninety-nine parts with Him, and sent down one part to the earth, and because of that one single part, His creatures are merciful to each other, so that even the mare lifts up its hoof away from its foal, lest it should trample on it.” [Al-Bukhari]
In another narration, ‘Umar ibn Al-Khattaab, may Allah be pleased with him, said, “The captives were brought to the Prophet

after a battle. Among them was a woman desperately searching for something. When she laid her eyes on a baby she immediately picked it up, clutched it to her breast and started feeding it. Thereupon, the Prophet,

asked: “Do you think this woman would throw her baby into a fire?” We said, ‘Never! By Allah, she would never allow this to happen,’ the Prophet

then said: “Allah is more merciful to His slaves than this woman is to her baby” [Muslim]
The forgiveness and mercy bestowed by Allah The Almighty on mount ‘Arafaat is incomparable. On this day, Allah The Almighty frees people from the Hellfire, as ‘Aa’ishah, may Allah be pleased with her, narrated in Muslim, that the Prophet,

said: “There is no day greater than ‘Arafaat in which Allah frees His slaves from The Hellfire. Allah ‘Yadnoo’ (which indicates coming close) to His slaves and boasts about them to the angels, then asks: “What do these slaves seek?” (This question is a rhetorical one). In another narration Allah The Almighty Says (what means): “I make you witnesses that I forgave them.”Then angels would say, “O Allah! So and so is overburdened with sins.” Allah The Almighty replies: “I forgave them all.”[Ibn Khuzaymah]
Al-Munaawi

commented on this, saying, “The fact that Allah boasted to the angels denotes His forgiveness, because Allah would not have boasted in front of the pure, sinless angels unless the pilgrim had become clear of all sins.”
Bilaal, may Allah be pleased with him,alsonarrated that the Prophet,

,said to him on the morning when the people gathered in Muzdalifah: “O Bilaal! Tell the people to be silent!” Then he addressed them: “Allah blessed you in this gathering and forgave the sinful among you due to the fact that you were amid the pious – and He granted the pious what they asked for.” [Ibn Maajah]
The Day of 'Arafaat is an opportune occasion to remind ourselves of the vastness of the mercy of Allah The Almighty, which is so all-encompassing that no number of sins can hinder it. Indeed, Allah The Almighty ordered His slaves to ask for His mercy when repenting of previous misdeeds, regardless of the extent of their sinfulness. Allah The Almighty Says (what means): {Say, ‘O My servants who have transgressed against themselves (by sinning), do not despair of the mercy of Allah. Indeed, Allah forgives all sins. Indeed, it is He who is the Forgiving, the Merciful.”}[Quran 39: 53]