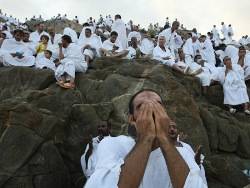 Let us take a look at the following figures:
The number of workers who are engaged in cleaning services at the sacred sites during Hajj is more than 22,000 workers. Officials deserve praise for recruiting such a large number of workers, since taking care of the cleanliness of the sacred sites is a very important matter, so that pilgrims can perform their rituals in a clean, hygienic environment.
The number of participants in health care and first aid services is 9,500 workers. This is in addition to private sectors such as the Defense Ministry, and the National Guard. This is also an important requirement to serve the pilgrims and take care of their health.
However, we must learn about something that is more important than all this. Yes, it is even more important than this!
Pilgrims do not come to this land from every distant pass to take care of their health or marvel at the cleanliness of their sacred sites. Rather, they come in order to perform the fifth pillar of Islam. They come in response to the command of Allah The Almighty and with the hope of returning free from sins just as they were on the day their mothers gave birth to them. They come from everywhere; from every corner of the vast world. Some of them may have spent everything they had in order to perform this religious obligation. Some of them may have spent their entire life and youth saving for the expenses of fulfilling the fifth pillar of Islam. They leave their families behind, spare no effort, and endure the hardship of travel, of arriving and departing from one place to another, seeking the mercy of their Lord and hoping to receive His satisfaction.
They are restlessly waiting for this opportunity. We see them weeping out of joy and longing to see the Sacred House of Allah. These are the people who have come to us; the question is: what have we prepared for them? How many callers to Allah The Almighty have we prepared for them? How many advisors have we prepared for them? How many scholars and seekers of knowledge do we need to help them evaluate their behavior, make them knowledgeable of their religion and teach them the guidance of the Prophet,

, in Hajj and performing rituals?
Do you know how many preachers were appointed officially to guide and advise the pilgrims of the Sacred House last year? There were only 170! When we add to them the preachers from other sectors, and other private agencies, the total will be about 700. There are more than 22,000 cleaners and the callers to Allah, who light the path for people, amount to only 700!
Despite such a large number of cleaners, we still saw mountains of dirt in the holy sites. This means that the large number of cleaners was not enough to achieve the appointed task. So, what about a meager 700 callers to Allah The Almighty? Even if we assume that there are one or two thousand callers to Allah The Almighty during Hajj, what would they do with the huge numbers of pilgrims?
O Muslims, two million Muslims who come from every remote area worldwide are met by this small number of callers to Allah! Two million Muslims, most of whom are thirsty for a good word, for correct guidance and a beneficial lecture, are received with this miniscule number of callers to Allah!
To have two million Muslims gathered in one place is a great opportunity. To gain access to this gathering requires neither tickets, nor entry visas, nor hotel expenses, nor expenses of food and drink; and still, we neglect this great source of good!
O Muslims! Are you pleased that such people return just as they came? Are you pleased that they return without any significant programs that were designed for them to instill in them the meanings of pure Islamic monotheism, unveil for them the facts of faith and clarify for them its nullifiers? Are you pleased that while the enemies are distorting the beliefs of the weak Muslims, when they come to you, you fail to teach them the issues of belief?
It is the responsibility of everyone among us to invest this great season in calling to Allah The Almighty. We bear the responsibility of those who have been led astray in their countries, their Islamic identity has atrophied, and the worship of some of them has become mere movements and mumbles, which are monotonously done with neither modesty, nor surrender nor experiencing the greatness of these acts of worship which, hence, no longer influence their life. We are responsible for preparing beneficial programs, planning well in advance to utilize this season and establish committees throughout the year to prepare new suggestions and means to give Da‘wah to these large numbers.
To be continued …