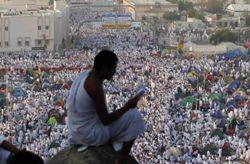 Imagine if this great season and such a large gathering of people were available to the Christians; do you suppose they would neglect it like us? Imagine that the Shiites were responsible for this event, would they act without purpose and collective efforts as we do? Imagine that the Sufis were responsible for this occasion, would they allow anarchy to prevail as we do?
When even the Shiites and the Sufis invest this opportunity with all possible means, what have we offered in this regard? Customs employees always complain of the large number of books and publications brought by the Shiites from their countries in order to spread them in the sacred places! Their keenness to call to their false beliefs has reached the degree of calling security personnel to their false beliefs!
O callers to Islam responsible for the Islamic Sharee‘ah (Islamic law) and seekers of knowledge! Fear Allah The Almighty with regard to the trust you bear. Fear Him with regard to proclaiming the religion of Allah The Almighty to people. We often see the pilgrims going here and there looking for someone to settle their problems and answer their questions. Fear Allah with regard to teaching the religion of Allah The Almighty to people and urging them to act accordingly, call to it and defend it.
O callers to Allah! How long will each of us remain confined to a group of the seekers of knowledge within a certain group or organization, whose meetings turn into times for entertainment, idle talk and socializing, at a time when each one of the pilgrims is in great need?
O seekers of knowledge, how long will you spend hours debating issues of knowledge which should be discussed at places other than the sacred sites? Virtual battles can rage endlessly regarding one of the disputed Fiqh (Islamic jurisprudence) issues, as if Maalik, Ash-Shaafi‘i, Ahmad and Abu Haneefah, may Allah have mercy on them, did not give different opinions regarding it before.
O bearers of the Sharee‘ah! How long will the sole concern of each of you be relating the news of the overcrowding he experienced and wasting time in idle talk, at a time when pilgrims are looking for someone to guide them, clarify a Sharee‘ah ruling or offer them advice?
Addressing the role of the scholars and seekers of knowledge does not mean that others are not responsible and accountable for their actions. Every Muslim who is endowed with some special ability or talent is required to invest it to call people towards Allah The Almighty during the season of Hajj. Whoever is endowed with knowledge is required to give lectures, give Fatwas (religious edicts), clarify the rulings of the rituals of Hajj, and its obligations and restrictions.
Whoever is capable of preaching should go to delegations and gatherings of people in mosques and other places to remind them of Allah The Almighty and urge them to be pious, adhere to the religion and often remember Allah The Almighty and ask for His forgiveness. He should urge them to spare no efforts in supplications and invocations, avoid harming people, safeguard their tongue, treat people kindly, and so on.
Whoever is knowledgeable of the rituals of Hajj should go to the places of these rituals in order to guide the ignorant or misguided people, lead the bewildered ones and help the elderly to perform their rituals. Abu Sa‘eed Al-Khudri, may Allah be pleased with him, narrated that the Messenger of Allah

said: "Avoid sitting on the roads."They (the Companions) asked, "O Messenger of Allah! We do not have any other alternative as these are our sitting places where we talk. Then, he (the Prophet

) said: "If you have no other alternative than sitting on the roads then you should give the road its right."They asked, "What is the right of the road, O Prophet of Allah?" He said:"It is to lower your gaze (from looking at what is illegal to look at), refrain from harming people, respond to the Salaam (when someone greets you with Salaam), enjoin good and forbid evil." [Al-Bukhari and Muslim]
The narration of Abu Daawood, may Allah have mercy on him, adds: "…guiding the wayfarer and saying 'may Allah have mercy on you' when another sneezes and then praises Allah."
The narration of Sa‘eed ibn Mansoor, may Allah have mercy on him, adds: "… relieving the distressed."
The narration of Al-Bazzaar, may Allah have mercy on him, adds: "….help others to carry their belongings."
The narration of At-Tabaraani, may Allah have mercy on him, adds: "….support the wronged and remember Allah often."
Whoever is endowed with financial ability can contribute with his wealth to calling towards Allah The Almighty, even if he does not perform Hajj. He can donate to charities or give the money to a caller to Allah whom he trusts to buy beneficial books and recorded materials to distribute among pilgrims. Alternatively, he can sponsor a group of callers to Allah in order to give Da‘wah to their own people. He can bear the expenses of Hajj for some callers from Africa, Indonesia, the Philippines or other Muslim countries and coordinate with local offices of Daw‘ah in order to keep these callers free to give lectures and sermons there.
Whoever is endowed with the physical ability to do so, can take part in distributing food in the different sacred sites, provide pilgrims with water, help others in distributing Islamic books and recorded materials, and so on. If this cause is coordinated with charities it would be even more beneficial.
To be continued …

Hajj: An Invaluable Da'wah Opportunity - I