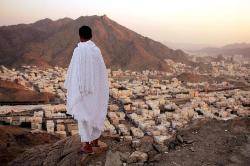 Whoever is able to coordinate with the callers to Allah The Almighty should coordinate with those in charge of delegations by preparing educational lectures for them as well as lessons in religious knowledge for some scholars and callers to Allah The Almighty. By doing so, he will be a source of goodness and a torch of guidance for people.
Whoever is web-savvy and has experience and expertise with the Internet should publish the rulings of Hajj, gather relevant useful articles and give tips on Da‘wah, in Arabic or in other languages. We should not forget to thank our brothers who are in charge of some forums for dedicating their forums for Hajj and its rulings. They do so because they realize the importance of this great pillar. We ask Allah The Almighty to grant success to those who assume this task.
Whoever speaks foreign languages should act as a translator between others and those who speak foreign languages. Allah The Almighty Says (what means): {And We did not send any messenger except [speaking] in the language of his people to state clearly for them.} [Quran 14: 4]
Unfortunately, some seekers of the worldly life who supervise foreign Hajj delegations seek to obtain greater worldly gains by keeping pilgrims ignorant about the rituals of Hajj as well as other religious obligations. This should help you realize the gravity of the responsibility upon you.
Thus, whoever can coordinate with the Ministry of Islamic Affairs to prepare Da‘wah programs for these delegations will have indeed done a blessed deed. Allah The Almighty Says (what means): {Invite to the way of your Lord with wisdom and good instruction, and argue with them in a way that is best.} [Quran 16: 125]
We do not deny the highly commendable efforts exerted by scholars and callers to Allah every year, as well as the great expenses undertaken to serve pilgrims by rich people. However, no matter how great their efforts are, they are still less than what is necessary to fulfill the obligation in this regard. This is clearly observed when one sees the prevalence of evil practices and the spread of violations, mostly out of ignorance, not with an evil intention. Whenever a pilgrim witnesses an evil act or a prohibition being committed, he must fulfill his role in compliance with the command of the Prophet,

, in Hajj, as he used to enjoin good and forbid evil. When he heard a man assuming Ihraam for Hajj on behalf of another man called Shabramah, though he had not performed Hajj for himself first, the Prophet,

, asked him: "Have you performed Hajj on your behalf first?"When the man said that he had not, the Prophet,

, said: "Perform Hajj on your behalf first and then on behalf of Shabramah."
The Prophet,

, denied the action of those who delayed ending Ihraam (sacral state) although they did not have the Hady (sacrificial animal) to offer. He became angry with their action and ordered them to end Ihraam and they responded to the command.
The Prophet,

, also denied the action of Al-Fadhl ibn ‘Abbaas, may Allah be pleased with them both, when he looked at a woman from Khath‘am while he was riding behind the Prophet

, kept on turning his face to the other side.
How wonderful it would be if the callers to Allah The Almighty and reformers follow the example of the Prophet,

in this great regard and make themselves role models for others in all deeds – particularly during the Hajj season. They should precede other people in doing the righteous deeds they preach and in being the most cautious in avoiding the evil acts that they forbid others.
Finally, let us not forget that this great opportunity includes the presence of Muslim women. Allocate special programs and lectures for them. Let your focus be on relevant misconceptions that treat the cultural and intellectual attacks against women through different mass media.

Hajj: An Invaluable Da'wah Opportunity - I