The Emotional Dimension of Hajj - I 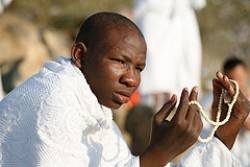 Just as young children take refuge with their mothers in an intuitive manner, man's disposition requires him to recourse to his Lord. Man can never change his inner character nor expel the idea of Allah The Almighty from his heart and mind.
Testimony of contemporary anthropology
Contemporary anthropology has proved this fact in a scientific manner. Experts of modern sociology have studied human society profoundly. One of the most important facts revealed after studying human societies from ancient times until today is that man continues to believe in Allah The Almighty, in spite of all the developments and changes he has undergone. Believing in Allah The Almighty and religion is part and parcel of human nature. The following is a paragraph quoted from Daa‘irat Al-Ma‘aarif Al-Amreekiyyah (the Encyclopedia Americana):
Contemporary anthropological research
"Man believed in religion with varying degrees since the beginning of human history. He always used to believe in one deity or more seeking protection. These gods were sometimes made of wood or stone. Some other times, they were made up in the shapes of animals, reptiles or fearsome animals that strove to suck the blood of those who worship them. Whatever these so-called gods were, man worshipped them because religion, represented in worshiping a supernatural power, is part and parcel of the formation of human nature."
In fact, recognizing the existence of Allah The Almighty is inherent in human nature, and it is a general feeling.  When man is not guided to the true God, he resorts to worshipping gods made up by his illusions. Sound human nature can satisfy this overflowing emotion by worshipping Allah The Almighty only, Who has no partners, if it were guided to the message of one of the prophets of Allah The Almighty. However, if one does not gain prophetic guidance, he will worship false deities to relieve this emotion in an artificial manner.
The original purpose of man is only one; namely: worshipping his Creator and Owner. This original purpose is a deep part of human nature. If man listens to his nature, he will be guided to Allah The Almighty and he will feel Him in his heartbeats. This disposition is the “unconsciousness” of man. A messenger of Allah The Almighty transfers man from this unconsciousness to the level of consciousness.
However, man is a peculiar creature. Unseen knowledge is not enough for him; rather, he wants to discover Allah The Almighty in a sensory manner as well; so that he perceives Allah The Almighty as a sensory perception. Nevertheless, the obstacle here is that man can never perceive Allah The Almighty as a real sensory perception before the Hereafter.
There is no doubt that man will see his Lord in the Hereafter. Allah The Almighty Says in the Noble Quran (what means): {[Some] faces, that Day, will be radiant, looking at their Lord.} [Quran 75: 22-23] This point was mentioned in collectively contiguous traditions. The Prophet,

said: "You will see your Lord with your eyes." Moreover, Jareer, may Allah be pleased with him, narrated, "The Prophet

looked at the full moon and said:'You will certainly see your lord as you see this moon.'" [Al-Bukhari and Muslim]
Symbols of Allah The Almighty
It is a religious fact that a person would see his Lord in the Hereafter. However, despite believing that seeing Allah The Almighty is possible only in the Hereafter, man longs to find his Lord and approach him as soon as possible and that is human nature. The question is: how can we satisfy this human desire in the life of this world?
To be continued …

The Emotional Dimension of Hajj - II

The Emotional Dimension of Hajj - III