The Emotional Dimension of Hajj - III 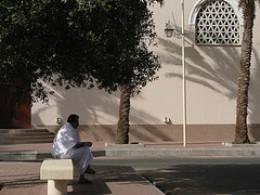 Making an idol representing Allah The Almighty is not the same as making a statue of a human being. Those who carve a statue of someone must have seen him or at least seen a picture of him. However, no sculptor can ever claim that he has seen Allah The Almighty. Those who carve idols, claiming they represent Allah The Almighty, are in fact limiting His limitless existence. They are actually confining a higher and greater being to an inferior form.
Every deed of this sort is contrary to reality and is synonymous with rebellion against the Creator. Hajj, in one respect, reforms this human mindset. The message of Hajj is: do not try to take God to the level of statues; rather, look at Him on the scale of His symbols. You cannot find Him in the life of this world on the level of His Divine Self, but you can find Him on the scale of the impact of this Supreme Self; namely, "the symbols" that were established as a result of the deeds of the great slaves of Allah The Almighty. We should consider and follow the example of these historical glimpses through which communication was established between Allah The Exalted and His righteous Messenger Ibraaheem, may Allah exalt his mention.
The symbols of Allah The Almighty are the signs of those great people who chose supreme servitude to Allah The Almighty. All the rituals of Hajj are performed at these symbols.
Distancing oneself from these symbols constitutes distancing oneself from Allah The Almighty and closeness to them constitutes closeness to Allah The Almighty.
One of the most important aspects of Hajj is that it constitutes a meeting between the slave and the Supreme Truth. The slave is enveloped by a special Divine state (feelings), so that he feels that he has left his world for the world of Allah The Almighty. He feels as if he is touching his Lord, making Tawaaf around Him, performing Sa’y towards Him, walking here and there for His sake, offering the sacrificial animal for His pleasure, throwing pebbles at His enemies, supplicating to Him whenever he wants and receiving from Him all that which he wishes.
The plain of ‘Arafaat is a wondrous scene. You see the slaves of Allah The Almighty coming one group after the other from every direction and upon the body of each of them is a simple cloth of the same type. Everyone has lost all that distinguishes him from others. All of them utter the same slogan, "Labbayk-Allahumma Labbayk. Labbayk-Allahumma Labbayk. (O Allah! I hasten to You. O Allah! I hasten to You)."
When you see this scene you remember the Quranic verse in which Allah The Almighty Says (what means): {And the Horn will be blown; and at once from the graves to their Lord they will hasten.} [Quran 36:51] The gathering of ‘Arafaat is a preview of the gathering of people on the Day of Judgment, where you see one of the great scenes of the Hereafter in the life of this world. There is a Hadeeth, which reads: "Hajj is ‘Arafah." This Hadeeth informs us about the most important aim of Hajj; namely, remembering that one will appear before Allah The Almighty in the gathering on the Day of Judgment and experience symbolically and intellectually what one will experience afterwards actually and truly.
The Ka‘bah is the House of Allah, the One and the Only. It has been built by two honored prophets: Ibraaheem and Ismaa‘eel, may Allah exalt their mention. The memories of their supreme lives and the incidents of their wondrous sacrifice are associated with this House. In addition, the fragrance of the life of the last Prophet,

, and his divine mission perfumes its atmosphere.
A Muslim reads about the incidents of this exemplary history of enslavement and sacrifice for the sake of Allah The Almighty in books. He hears the incidents of this history from the time of his childhood until going for Hajj to the extent that they become part of his memory. These memories are revived all of a sudden the moment one arrives after experiencing the hardships of travelling and stands face to face with the Ka‘bah. He finds himself standing before a whole history: a history of fearing Allah The Almighty, loving Him, sacrificing for His sake, choosing to worship Him with no partners, acknowledging Him as absolutely omnipotent and obliterating oneself for His sake and His pleasure.
You find this great, divine history embodied in the image of the Ka‘bah. You see this history written on the rocks and the sand. Your mind is affected with this experience that transforms your heart and turns you into a whole new person.

The Emotional Dimension of Hajj - I

The Emotional Dimension of Hajj - II