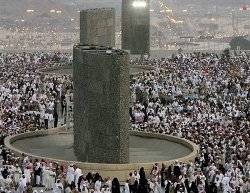 It was narrated that Ibn Mas‘ood, may Allah be pleased with him, said, "The Messenger of Allah

who is the most truthful one, said to us:'Each one of you comes together in his mother's womb for forty days and then becomes a clot for a similar period of time. Then he becomes a chewed lump of flesh for a similar length of time. Then an angel is sent to him and he breathes spirit into him…’” [Al-Bukhari and Muslim]
Man consists of body and spirit. When the spirit is weak, the body dominates the spirit and a man becomes similar to animals. He becomes a slave and prisoner of the lusts of food, drink, sex, sleep as well as other sensual desires. The spirit wilts and withers away, and is overcome and dragged to the dirt. Thus, man falls to the lowest depths and lives solely to satisfy his physical needs, thereby restricting his aspirations and hopes only to this earth and the worldly life. He becomes like the heedless people who do not see beyond the view of their sensual eyes, for their hearts have been tainted and covered by a veil due to their deeds.
When the spirit is strong, it overcomes the body, leads man to goodness in both worlds and saves him from both extremism and negligence. When the spirit dominates, it neither curbs the body's desires, nor wrongs it. Rather, it leads the body in a way which reforms it. Thus, one surrenders to Allah The Almighty Who breathed the spirit into him; thus, he is far removed from acquiring animal-like traits and achieves the task for which he has been created, which is succession on earth.
"Spiritual energy is man's largest and greatest energy and the most relevant to existence. On the contrary, the body's energy is limited, as it depends on what is perceived by the senses. Although the mind's energy is more powerful, it is also restricted by time and place. Spiritual energy, however, is neither limited nor restricted, since it is connected to Allah The Almighty." [Manhaj At-Tarbiyah Al-Islamiyyah: Muhammad Qutb]
Islam gives special care to the spirit, since it is the means of connecting it to Allah The Almighty. The essence of the Islamic approach in disciplining the spirit is to establish a permanent connection between it and Allah The Almighty in every moment, every action, every thought and every feeling.
Worship is the most effective way to discipline the spirit. Worship makes one always connected to Allah The Almighty. The main purpose of many acts of worship, such as prayer, fasting, Hajj and Zakah (obligatory charity), is to establish a permanent relationship between the slave and his Lord and to further keep this relation strong and firm. It is from the favors of Allah The Almighty on man that some acts of worship are performed daily (such as prayers), others annually (such as fasting), and a third category which is required just once in one’s lifetime, such as Hajj. The acts of worship in essence are opportunities to maintain a strong and firm relationship between the slave and his Lord. The role of Hajj is refining the soul and strengthening its connection to Allah The Almighty and charging it with consciousness of Allah The Almighty.
The role of Hajj in spiritual discipline
Abu Hurayrah, may Allah be pleased with him, narrated that the Prophet,

, was asked, "What is the best deed?” He replied: “To have faith in Allah and His Messenger.”The enquirer asked, “What next?” The Prophet,

, said:“To perform Jihaad for the sake of Allah.” The enquirer asked, “What next?” The Prophet,

, said:“To perform a valid and accepted Hajj." [Al-Bukhari and Muslim]
Hajj is immediately mentioned after Jihaad because they are both from the best acts of obedience which bring one closer to Allah The Almighty, next to having faith in Him.
It was narrated that ‘Aa’ishah, may Allah be pleased with her, said, "O Messenger of Allah! We find Jihaad the best of deeds. May we (i.e. women) participate in Jihaad?”The Prophet,

, replied:“No, the best Jihaad for you (i.e. women) is a valid and accepted Hajj." [Al-Bukhari] According to another narration, she said, "O Messenger of Allah! Are women required to make Jihaad?”The Prophet,

, replied:“They are required to make Jihaad with no fighting in it: i.e. performing Hajj and ‘Umrah."[Ibn Khuzaymah]
Hajj is a temporary desertion of the worldly life
Hajj starts when one assumes Ihraam (sacral state) by taking off form-fitting clothes, abandoning perfume during the whole period of Ihraam, wearing a uniform which consists of an upper and lower sheet of white cloth. When one is in the state of Ihraam, he abandons the adornment and pleasures of the worldly life and uses only what covers his ‘Awrah (private parts), as he seeks nothing but the satisfaction of Allah The Almighty.
Talbiyah implies encouragement to head for Allah The Almighty
When the pilgrim reaches the Meeqaat (a place from where one has to assume Ihraam), he starts to repeat Talbiyah, saying, "Labbayka Allahumma labbayk. Labbayka laa shareeka laka labbayk (O Allah, I answer Your Call, there is no partner with You)." It is as if one says: I have abandoned the worldly life with everything in it and hastened to You, my Lord, so that You may become satisfied with me. Here I am worshipping none but You and care for none but You. He declares this after he has cast off his ordinary clothes and the pleasures of the worldly life for the sake of Allah The Almighty alone.
To be continued …