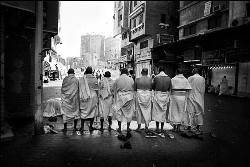 Hajj is a temporary desertion of life and its pleasures:
During Hajj, the pilgrim abandons his regular food and drink and makes do with whatever is easily available, without putting himself to extra hardship or trouble. He also frees himself from the dominance of his usual habits with regard to food, drink and sleep. Many Muslims are used to having a variety of food on the table, including vegetables, fruits, and so on. They are also used to having their meals at specific times. Many Muslims are also used to having several types of beverages and cold water, which is too difficult to be available during the journey of Hajj.
When one abandons these habits, this trains him to free himself from the restrictions of the worldly life and its sensual pleasures. It is an attempt to weaken the body to enable it to be overcome by the spirit which leads it to the goodness of the two worlds.
Many Muslims are used to sleeping at specific times on comfortable beds with special pillows. In the case of some people, even if their pillow is changed, they get disturbed and cannot sleep comfortably. This lifestyle is very different from the condition of pilgrims, who sleep on stones and use their shoes as pillows when they find an opportunity to take off their shoes and sleep for some moments. They cannot sleep on one bed for more than a few hours. Rather, they are required to depart from one place to another. Hajj frees one from the dominance of the habits of food, drink and sleep which control many Muslims. During Hajj, one experiences a completely different lifestyle, eats different food and sleeps in a different way.
The Spirit underlying Hajj rituals
During Hajj, the spirit is connected to its Lord, The Exalted, for long periods of time. While one is performing Tawaaf, he is occupied with remembering Allah The Almighty, asking for His Pardon and forgiveness, seeking Paradise and invoking Him seeking refuge from Hell. The spirit shines when one is attached to Allah The Almighty with a humble heart and tearful eyes, asking for pardon and forgiveness. The spirit is pleased when one is occupied with his Lord and is attached to Him.
This also occurs when the pilgrim performs the two Rak’ah prayer after Tawaaf and supplicates to Allah The Almighty before the Maqaam (Station) of Ibraaheem, may Allah exalt his mention. Supplication is a form of worship, as the Prophet,

, said. It reflects the fact that man is the servant and slave of Allah The Almighty alone, and enables man to achieve true freedom. The slave of Allah is a slave of none but Him and this is the essence and highest degree of freedom.
When one performs Sa‘y between As-Safa and Al-Marwah, his tongue never stops remembering and supplicating Allah The Almighty. This ritual brings to his mind the memory of Haajar, the mother of Ismaa‘eel, may Allah exalt their mention, and how her heart was attached to Allah The Almighty. She openly declared this when she asked Ibraaheem, may Allah exalt his mention, why he was leaving her in such a remote and deserted place. She asked him, "Did Allah command you to do this?" When he replied in the affirmative, she said, "Certainly, He (Allah) will not forsake us."
On the Day of ‘Arafah the pilgrim combines both the Thuhr and ‘Asr prayers, in order to be free for supplication and invocation and persistently ask Allah The Almighty to forgive his sins, since none can do so but Him. When the spirit finds man attached to his Lord, it gains strength. This is actually the provision of the spirit during Hajj.
When the pilgrim sees the overcrowding upon departing from ‘Arafah to Muzdalifah, at Muzdalifah and while throwing the pebbles, he remembers the Day of Resurrection and its terrors and becomes more attached to Allah The Almighty, in order for Him to help him and make hardships easy for him. Meanwhile, he realizes his true significance, that he is a slave of Allah The Almighty just like the many slaves around him. This frees him from taking pride in his temporary worldly position.
On the Day of Nahr (the 10th day of Thul-Hijjah), the pilgrim shaves his head in order to stress his desertion of the worldly life and its adornment. That is why shaving the hair is better than trimming. When one shaves his head, he exalts himself beyond the worldly life and its perishable appearances and prepares himself to meet Allah The Almighty, Who looks at our hearts, not our appearance.
All the rituals of Hajj signify the abandonment of the worldly life and inclining to Allah The Almighty. This is what actually benefits the spirit, develops and strengthens it and aids it to lead the body and overcome it.