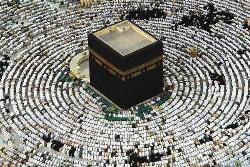 8)   Hajj makes one accustomed to Du‘aa’ (supplication): Allah The Almighty is near and responds to the invocation of the supplicants. The Messenger of Allah

explained that the generosity of Allah The Almighty is great and that He, The Exalted, responds to the invocations of the supplicants and ransoms more of His slaves from Hellfire on the Day of ‘Arafah than on any other day. It was narrated on the authority of ‘Aa’ishah

said: “There is no day on which Allah ransoms more of His slaves from Hellfire than the day of ‘Arafah.” [Muslim]

urged Muslims to make profuse Du‘aa’, especially on the Day of ‘Arafah, saying: “The best of Du‘aa’ is the Du‘aa’ made on the day of ‘Arafah, and the best that I and the Prophets before me said is ‘Laa Ilaaha Illa-Allah Wahdahu laa Shareeka lah, Lahul-Mulk wa lahul-Hamd wa Huwa ‘ala Kulli Shay’in Qadeer (There is no god worthy of worship but Allah Alone, with no partner or associate; His is the dominion, to Him be praise, and He has power over all things).” [At-Tirmithi; Al-Albaani: Hasan in Saheeh Al-Jaami‘ As-Sagheer No. 3274]

If the pilgrim gets used to making Du‘aa’ on such days, then this will make him get used to do it in the days after that. It also encourages non-pilgrims to supplicate Allah The Almighty The Most Generous who made a promise to respond to the supplication of the supplicants, Saying (what means): {And when My servants ask you, [O Muhammad], concerning Me - indeed I am near. I respond to the invocation of the supplicant when he calls upon Me. So let them respond to Me [by obedience] and believe in Me that they may be [rightly] guided.} [Quran 2:186]

9)   Hajj expiates sins and entails entering Paradise: This is a great lesson and noble benefit that indicates the great generosity of Allah The Almighty. Sins are expiated because the honorable Prophet

said: “Keep on performing Hajj and ‘Umrah, for they eliminate poverty and sins just as the bellows eliminate impurities from iron.” [Ibn Maajah and Imam Ahmad; Al-Albaani: Saheeh in Saheeh Al-Jaami‘ As-Sagheer No. 2899]

In another narration reported by An-Nasaa’i

with a sound chain of narrators: “For they eliminate sins just as the bellows eliminate impurities from iron.”

In a third narration reported by An-Nasaa’i, At-Tirmithi and Imam Ahmad

with a sound chain of narrators: “For they eliminate poverty and sin just as the bellows eliminate impurities from iron, gold and silver.”

said: “Whoever does Hajj for the sake of Allah and does not have sexual relations (with his wife), commit sin, or dispute unjustly during the Hajj, will come back like the day his mother gave birth to him.” [Al-Bukhari and Muslim]

Most of the scholars are of the opinion – and it is the correct opinion, Allah willing – that such forgiveness is restricted to the minor sins while others believe that it also includes the major sins. Being a reason for entering Paradise is due to the saying of the honorable Prophet

: “‘Umrah is an expiation for the time between it and the previous ‘Umrah, and an accepted Hajj has no less a reward than Paradise.” [Al-Bukhari and Muslim]

Among the other forms of the generosity and kindness of Allah The Almighty is that He The Exalted accepts the Hajj of the small child and rewards him for that while he is obliged to perform Hajj again after reaching the age of puberty. That is because it was narrated that As-Saa’ib ibn Yazeed

said, “I was taken for Hajj with the Messenger of Allah

when I was seven years old.” [Al-Bukhari]

met some riders at Ar-Rawhaa’ (a place between Makkah and Al-Madeenah) and asked: “‘Who are you?’ They replied, ‘Muslims.’ Then they said, ‘Who are you?’ He

There is no doubt that this calls upon all Muslims to compete with each other in performing good deeds in abundance, seeking the rewards of Allah The Almighty The Most Generous.

May Allah provide us with clear understanding and make us benefit from the many precious lessons and wisdoms of this great pillar of Islam for surely He The Exalted is the Most Generous and Kind.

Lessons Drawn from Hajj - I