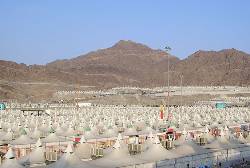 Pilgrims gather in one place despite their differences in nationalities, colors and languages. They wear the same clothes, worship the same Lord, share water and bread, and neighbor one another in residence, overnight stay, and travelling in these sacred places. The western Muslim embraces his African Muslim brother and the Asian embraces his European Muslim brother. They totally forget all the official documents, personal identities and national senses of belonging. All ties melt in the great crucible of Islam. All these manifestations declare the lapse of all worldly calls, ignorant partisanships, regional slogans, tribal prejudices and national mottoes that the foolish people of this world never stop calling for. They fill the world with noise by their worn out calls and useless arguments neglecting, in their foolishness and arrogance, that the value, status and glory of man is dependent upon the extent of his adhering to Islam, belonging to piety and faith and his taking pride in the values of the Quran. Allah The Almighty Says (what means): {O mankind, indeed We have created you from male and female and made you peoples and tribes that you may know one another. Indeed, the most noble of you in the sight of Allah is the most righteous of you. Indeed, Allah is Knowing and Acquainted.} [Quran 49:13] So, an Arab is not superior to a non-Arab and nor is a white man superior to a black one. This is the fundamental standard and the most accurate of criteria for favoring and distinguishing people. It is the same criteria that elevated Bilaal, ‘Ammaar and Ibn Mas‘ood

and degraded Abu Jahl, Musaylimah and others, may Allah destroy them. Muslims did not lose their dignity and respect and give courage to their enemies except when the balance of justice wavered in their lives, partisanship spread among their circles and the share of discrimination according to 'social class' increased in their communities.

This is a clear declaration that the only way to achieve the unity of the nation starts from the paths of Makkah to the land of ‘Arafat. It is the unity that is based on the same creed and moderate Islam; the religion of the true God and the infallible Prophet

. It is unity that does not recognize political borders or legal restrictions. Its bridges are not built upon worldly interests or ignorant partisanship. There is no doubt that any boundary attempt that is not based upon the valid creed is unity that is prone to disintegration and collapse, regardless of whether it remains for a long or a short period of time.

Those who consider the biography of the Prophet

realize very well how he was able to build unity and establish strong solidarity between people who were, until then, the very example of division, vagrancy and difference. Bloody wars were common among them and they were consumed by tribalism. Thereupon, the creed of faith dissolved all these serious obstacles and cut short all the long distances to become the great epic of oneness and encompass the solid wall of faith for an almost unreal duration. This was indeed a miraculous endeavor.

O Muslims, today, Muslims are able to repeat the attempt with their true determination and good will. Their souls have become free from fraud, deceit and guile. They need unity to regain their respect, build their glory and proceed towards leadership and being pioneers. If this does not happen, then there is no hope that unity will protect their homes from their enemies and their sanctities from humiliation and stop the shedding of blood on their lands by the bands of Jews on the day when serious unity is lost and the concept of 'one body' disappears.

The renaissance of the nation

In Hajj, there are countless lessons and unforgettable benefits, and that which cannot be fully obtained should nevertheless not be fully abandoned. Muslims today are in a dire need to return to the fundamentals of their religion and the virtues of their Sharee‘ah which constitute dignity, the very basics of renaissance and the spring of power. They need to extract the treasures and deduce and reflect upon the lessons which were granted by the Great Legislator and contained by the wise Sharee‘ah. It is a disaster that Hajj passes year after year and as one opportunity after the other without many Muslims taking even one step forward. It is a disaster that Muslims arrive at the end of the convoy and the bottom of the list while they belong to the greatest religion and embrace the most perfect Sharee‘ah. It is time for those who are sleeping to wake up, those who are heedless to pay attention and those who are at the back to progress and raise the flag bravely and hold on to the religion strongly and take it towards the horizons to convey the message of Allah and fear Him and none but Him.

What a great sin and what a clear error it was when the Muslims relinquished their religion and took the Sharee‘ah lightly and thus deprived themselves and humanity of the blessings of the greatest religion and the most honored of messages, following which the whole world stumbled in darkness and sank in the swamps of vice. All this happened on the day when Islam was late in attaining leadership, Muslims relinquished being pioneers, and the best nation that ever created was satisfied with subordination and retardation.

This, therefore is a call to revive the symbols of religion in the souls, rectify belief in the hearts, reconsider reality truthfully and correct the mistakes justly.

It is a call to employ and benefit from Hajj for the bounty of Islam, build the nation and awaken the heedless, starting by achieving unity, passing by reviving the Sunnah of compliance and arriving at the renaissance, unity, leadership and pioneering of the nation. All this is not at all difficult for Allah.