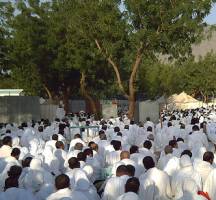 The first lesson: Hajj is for the sake of Allah, Lord of the Worlds:

There is no good in the life of this world and no share in the Hereafter without Tawheed. For its sake, the religion was established, the Qiblah (direction of prayer) was legislated, and the heavens, earth, and all mankind, jinn and angels were created. The monotheist is the one who acknowledges for Allah the absolute unity of divine Lordship and sincere unity of worship and acknowledges for his Lord His most beautiful names and superior attributes because Allah is described with beauty and characterized by perfection. The monotheist declares with strength, determination and courage that he worships none except Allah, that he is subject to none but Him, that he supplicates to none except Him, slaughters his sacrifice to none except Him, swears by none except Him, relies upon none except Him, fears none but Him and that to Him alone belong the reins of the heavens and the earth and the keys of the unknown, might and omnipotence. Judgment is His and the orders and the Sharee‘ah are His. He is the worthiest one to be worshipped, the finest to be remembered, the Most Generous to be asked and the Most Munificent in giving. Whenever this emotion overwhelms the Muslim and his deep consciousness, the landmarks of the road will be clear for him and the paths of life will appear before him. He will know who he is really, where his end and destiny are, by whom he should be led, to whom he should subject his life, to whom he should belong, from whom he should derive his power and thoughts, for whom he should clash and for whom he should resort to for arbitration. Moreover, the slave who exalts his Creator with praise will notice this, if he is intelligent.

The large number of the rites of Hajj and their association with certain manners and times draw attention to the fact that there is one legislator; namely, Allah The Almighty, who has the absolute will in legislating what He wants and prescribing what He wishes. The Muslim submits to His legislation and judgment and knows with certainty that every law contrary to the Sharee‘ah of Allah is false and anything that contradicts the Sunnah of His Prophet

(may Allah exalt his mention), is not acceptable. Allah The Exalted Says (what means):

The second lesson: Following the religion and not innovating in it.

It is a renewal of following Muhammad

said: "Learn your Hajj rituals from me." Therefore, one should only recite his Talbiyah, witness the Sacred Monuments like his witnessing, cast pebbles like he did, slaughter the sacrifices like he did, perform the Tawaaf like he did, and perform all others of the fundamental rulings of Hajj like he

did and expiate himself with his concessions. Nothing is permissible except that which he

held as permissible and nothing is prohibited except that which he

prohibited. Whatever the Messenger of Allah

has given you, take; and whatever he has forbidden you from, refrain from. He who obeys the Messenger

has obeyed Allah; but those who turn away – then Allah has not sent us over them as a guardian.

Therefore, nobody is in charge of this religion. Nobody has the right to legislate what he wishes, issue the Fatwa (ruling) that he wants or put himself forward before Allah and His Messenger

. Perfect infallibility is for the Messenger of Allah

absolute obedience is to the Messenger of Allah

and the binding Fatwa is that of the Messenger of Allah

. If he orders us, nothing is to be obeyed except his order. If he prohibits something, there should be no further discussion. If he expresses an opinion, then no other opinion should be considered. The loser is he who is deprived of the blessing of following the Sunnah and the afflicted is he who is fascinated by the love of contradicting the Sunnah and innovating in religion. Let him fear Allah - he who admires himself and is deceived by his desires. He strays as he opposes the Prophet

and follows some other way; not the way of the believers. All that he has is little knowledge and misunderstanding. He does not know the value, status and grandeur of the Messenger of Allah