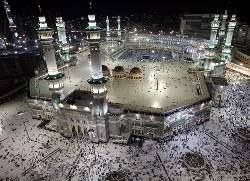 All perfect praise is due to Allah, and may He exalt the mention of the final Prophet, after whom there will be no others.

The season of Hajj is coming and its blessed days have approached us. They are witnesses to what people will fill them with. Some people will fill them with good deeds: great acts that draw one closer to Allah such as prayers, fasting, Hajj, ‘Umrah (minor pilgrimage), competing in acts of obedience and hastening to goodness. Allah The Almighty Says (what means): {Indeed, they would hasten to good deeds and supplicate Us in hope and fear, and they were to Us humbly submissive.} [Quran 21:90]

Contrary to this is what others do. They squander the opportunity just as it is squandered in many other seasons, for they give it no value. They take it in ridicule and amusement and are deceived by the life of this world and think that, somehow, they are not returning to their Lord.

If the first ten days of the month of Thul-Hijjah, the Day of ‘Arafah, the Day of Nahr (slaughter) and the Days of Tashreeq (the three days after the day of 'Eed) are to pass as they passed for many years before in succession for whoever desires to remember or to show gratitude, and after the pilgrims return to their countries and homelands, then will something change in their lives and circumstances? Do these great seasons and noble days affect their behavior and actions? Is there any positive impact achieved on the individual or group level, or on the level of the just nation that Allah chose to be witnesses over people on the Day when mankind will stand before the Lord of the worlds?

O Muslims, it is from the most blatant factors of the deterioration, backwardness, loss and division of our nation that it is a nation that does not utilize the rituals of its great religion; a nation that is so coldly heedless of the astonishing treasures, great wisdoms and immense benefits of the obligations, rituals and glimpses of light that came with Islam. It has become a nation that deals with the rituals of its religion, the obligations of its symbols and the obligations of its Sharee‘ah in a monotonous and mundane manner that at times displays coldness and toughness and is enveloped with negligence and distraction. If this is not the case, then what does it mean that Hajj has become in the minds, emotions and imaginations of many people a mere vast plain called the Sacred Monuments where many people crowd to perform the rituals in a rush without feeling the meaning or the purpose of what they are doing? If one were to consider the speech of people in their gatherings during and after Hajj, he would find that they hardly come across subjects other than the numbers of pilgrims, the size of the crowds and the extremely hot weather, and it would be rare to find them talking about the Hajj itself and impact, lessons, benefits and treasures. They forget and neglect mentioning this, and by Allah, this is clear deprivation.

This work is a commodity meager in quality and a modest effort to remember some of the impacts and lessons of Hajj without which Hajj would become useless and a waste of effort, time and money. I swear by Allah that these lessons are the real criteria with which we can judge the success or failure of the season of Hajj. They are some of the benefits mentioned in the noble Quran when Allah The Almighty Says (what means): {That they may witness benefits for themselves and mention the name of Allah on known days….} [Quran 22:28] We believe that highlighting the purposes, aims, lessons and symbols of Hajj is sufficient to accomplish significant achievements and considerable results that would take the nation steps forward, reserve for it a place in the primary rows and jump with it to high ranks and elevated positions. Therefore, pay close attention, may Allah preserve you, and concentrate, May Allah have mercy upon you. These are lessons from the great school (the school of Hajj); a school prescribed by Allah, explained by the Quran and whose landmarks were set forth by the Prophet