‎The Relationship Between ‘Aqeedah and Sacrifice‎ 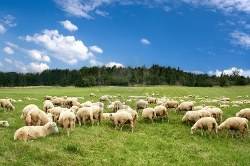 The act of offering a sacrifice (i.e., slaughtering an animal) has a great status in the Quran and the Sunnah (tradition) of the Prophet

in both his sayings and deeds.

‎This is because it is one of the greatest forms of servitude which is highly appreciated by Allah The Almighty. ‎

The sacrificial animal is related to one of the greatest incidents in Islam, as Allah The Almighty tried His intimate friend, Prophet Ibraaheem

by ordering him to slaughter his son Ismaa’eel

. This story was mentioned in the Quran in verses the like of which can never be produced even by the most articulate people.

Allah The Almighty Says (what means): {So We gave him good tidings of a forbearing boy. ‎ ‎And when he reached with him [the age of] exertion, he said, "O my son, indeed I have seen in a dream that I [must] sacrifice you, so see what you think." He said, "O my father, do as you are commanded. You will find me, if Allah wills, of the steadfast." And when they had both submitted and he put him down upon his forehead, We called to him, "O Abraham, You have fulfilled the vision." Indeed, We thus reward the doers of good. Indeed, this was the clear trial. And We ransomed him with a great sacrifice.} [Quran 37:101-107] ‎

up till the time of Prophet Muhammad

as an Islamic rite that is inherited through Muslim generations and that is used to declare Tawheed (Islamic monotheism). ‎

-         {That they may witness benefits for themselves and mention the name of Allah on known days over what He has provided for them of [sacrificial] animals. So eat of them and feed the miserable and poor.} [Quran 22:28]

-         {And for all religion We have appointed a rite [of sacrifice] that they may mention the name of Allah over what He has provided for them of [sacrificial] animals. For your god is one God, so to Him submit. And, [O Muhammad], give good tidings to the humble [before their Lord]. Who, when Allah is mentioned, their hearts are fearful, and [to] the patient over what has afflicted them, and the establishers of prayer and those who spend from what We have provided them. And the camels and cattle We have appointed for you as among the Symbols of Allah; for you therein is good. So mention the name of Allah upon them when lined up [for sacrifice]; and when they are [lifeless] on their sides, then eat from them and feed the needy and the beggar. Thus have We subjected them to you that you may be grateful. Their meat will not reach Allah, nor will their blood, but what reaches Him is piety from you. Thus have We subjected them to you that you may glorify Allah for that [to] which He has guided you; and give good tidings to the doers of good.} [Quran ‎22:34-37]

‎The following can be concluded from the abovementioned verses:

1)  The greatness of the sacrifice and the fact that it is mentioned next to prayer in several places in the Quran. ‎

2)  It is a way of remembering Allah The Almighty, praising and glorifying Him. ‎

3)  It is related to monotheism and submission to Allah The Almighty. ‎

4)  It brings about Taqwa (piety, consciousness and fear of Allah The Almighty). ‎‎

Because of these great merits, the Prophet

performed this act of worship with great reverence. It was narrated on the authority of ‘Abdullah ibn ‘Umar

stayed in Madeenah for ten years and he offered Udh-hiyah every year. [Ahmad and At-Tirmithi] Anas ibn Maalik

slaughtered two horned rams, black and white in color. He slaughtered them with his own hands and mentioned the Name of Allah over them, said Takbeer and put his foot on their sides." [Al-Bukhari and Muslim] ‎

In fact, experiencing the greatness of this rite, its essence and wisdom, makes the believer realize the great relationship between ‘Aqeedah (creed) and sacrifice. The sacrifice entails to not only slaughter an animal, shed blood or eat meat, but it is an act of worship, glorification, praise, fear and remembrance of Allah The Almighty.