So Many Riders, but Only a Few Pilgrims! 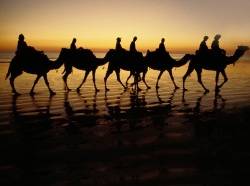 and others is their saying when they saw what the pilgrims innovated in their times, “So many riders, but only a few pilgrims!”

The same applies to Hajj. If these precious words were expressed by our righteous predecessors hundreds of years ago, in the best centuries, then what about the conditions of the pilgrims in our present times?

If we wish to realize the reality of the situation without exaggeration, we have to consider the conduct of the pilgrims while they are performing their rites and also observe their conduct after they have performed this great act of worship and returned home. How many pilgrims performed Hajj this year? Rather, how many pilgrims regularly perform Hajj every year? You may see them during Hajj insulting someone and slandering the honor of another. It may be that a pilgrim refrains from indulging in immoral acts while performing Hajj, and when he completes it and returns home, you find him returning to his old habits of severing ties of kinship, mistreating relatives and strangers alike, consuming the properties of people unjustly, or oppressing people one way or another. If you were to rip open his heart, you would find it as it is: full of pride, haughtiness, arrogance, envy and hatred. What benefits did this person actually reap from Hajj? Did this pilgrim perform Hajj as a custom or as an act of worship?

Did this pilgrim take off his clothes and wear the clothes of the pilgrim while neglecting to take off his heavy load of sins? Did this pilgrim shave his hair or trim it while not giving due attention to cruelty and tyranny that he may be subjecting his family and relatives to, or those who are weak?

Indeed, whoever performs Hajj to worship Allah The Almighty sincerely and to draw closer to Him, the great effect of Hajj will appear on him, even if he does it only once in his lifetime. As for the one who performs it as a custom, the effect of Hajj will not be observed in his conduct and dealings with Allah The Almighty and people, even if he does it every year.

Rather, you will see him return to his earlier conduct, that he was accustomed to before performing Hajj. If only many more pilgrims went back from Hajj to hold themselves accountable and consider thoughtfully their lifestyle, their relationship with their parents, wife and children, and their conduct at work and trade, the source of their wealth, and their manner of spending that wealth, and weigh all that with the scales of religion, not the scales of their own desires.

How many pilgrims return to the old lifestyles that they had been accustomed to before Hajj i.e. returning to neglect the rights of their parents, which embitters their lives, as he does every year. On the other hand, you may see him continuing to oppress his wife, the mother of his children, and abuse her, which makes her hate her life, just as he does every year. Or he continues to scheme to consume the property of people unjustly until the stench of his unsavory actions spreads everywhere: where is the effect of Hajj on the conduct of such a person and those who are like him?

Such a pilgrim takes off his clothes and wears the clothes of the pilgrim while he did not take off his heavy load of sins; such a pilgrim shaves or trims his hair while he has not lightened his oppression of the members of his family and relatives or the weak. Such a pilgrim slaughters his sacrifice and Hady but he has not slaughtered his own evil desires that beautify the evil of his actions. This pilgrim spends the night at Muzdalifah and Mina and throws the pebbles but he did not stone the devil that runs in his blood that has ascended the throne of his heart and mind. Then, how would such a person return from his Hajj free of sin as on the day his mother bore him, while he is the same as he was when he traveled to perform Hajj?

The Muslim who is sincere in his worship and truthful with his Lord continuously holds himself accountable. Thus, the true effect of worship appears on him, not as a pretense. This is the only person, among many, who truly benefits from worship.