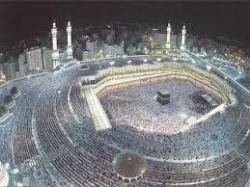 Every day when I go to pick up my kids at our local Islamic school, I walk past a large photo image of the Ka'bah, surrounded by swarming white-clothed pilgrims desperate to have their hearts cleansed and prayers answered by the Almighty Allah. I remember when my oldest daughter was two, she used to point to the picture and say "Ka'bah" in cute baby language.

She knew what it was, and I felt some pride as a parent that I was off to the right start raising a good little Muslimah. Year after year, our children could tell us, yes, Hajj is one of the five pillars of Islam. But, what does it mean to them? Can it mean anything more than just a word? As millions of devoted Muslims take to the air, sea and land, heading to the Holiest sites, what can we as parents do to make the beauty and purity of Hajj come to life in our homes? Is it possible for our children to make a connection with this miraculous annual planetary event?

If this sounds like something you would like to do, here are some ideas. Just before Hajj begins, rent or buy one of those videos on Hajj and sit down as a family and watch it. Watching Hajj will awaken an emotional response inside everyone, seeing all of those Muslims together, praying in unison. Your hearts will yearn to be there, sharing in this incredible pillar of Islam.

Allah Says (what means): {…And take provisions, but indeed, the best provision is fear of Allah. And fear Me, O you of understanding.} [Quran 2:197]

Isn't it amazing that the best provision Allah asks pilgrims to take on Hajj is right conduct? He The Almighty didn’t’ Say "sincere prayer" or "give the most charity" or "read the entire Quran" or "perform it perfectly." He The Almighty said, "right conduct" to those that are wise. This verse reaffirms many other Prophetic narrations and Quranic verses that emphasize the importance of character in the life of a Muslim. For it is within our characters that the sincerity of our words and intentions comes to life. If we can sit and memorize Quran for hours and then fail to smile at our neighbor, where is Islam in our lives? We know our character ultimately defines our faith. So, why not, during the Hajj, together as a family sit down and pledge to try to have the character of a pilgrim? Agree not to argue, raise voices or lose patience. Each day, sit together and discuss character. Let each person try to identify in him or herself in what way their character needs improvement (because of course we all have room to improve).

For example, the oldest sibling might recognize she is kind of bossy and unkind to her younger sister. A mother might admit she shouts too much when her children aren't listening. A father might realize that he more easily criticizes than compliments. Then, talk about the character of the Prophet

responded in difficult situations. The Hajj environment truly tests one’s patience, with hours of waiting in the heat, unimaginable crowds of people pressing each other on in a sea of human bodies. As you discuss, keep in mind this bottom line on character:

Each person chooses his/her character. No one "makes" a person do or say anything; like, "Hamza made me angry!" when in fact, a person has a choice to become angry or not when faced with antagonizing behavior. Or, "if you didn't fail that test I wouldn't have to shout at you." Again the logic is lacking. We cannot put the blame of our poor character choices onto the actions or words of others. This is what Muslim character is all about. This is why Allah called such people wise. The Prophet's

wisdom in these manners is unparalleled. When people spat on him, he

prayed for their salvation. When people insulted him, he

kept quiet. It is these actions that have enabled his

message to ring true in the ears of humanity 1400 years after Islam came to be. Beautiful, shining, humble character. Nothing on Earth can compare. A Muslim with such character is like a beacon of hope in a world infected with hate, killing, greed and materialism. The opportunity Hajj gives us as parents is to focus on our character, and to work together as a family to improve ourselves.

Another hope of all pilgrims is to leave Hajj purified and without sin. Yet, asking Allah's forgiveness is something we can't live without every day of our lives. Consciously or not, we as humans are fallible, and require Allah's mercy to have even the slightest hope to enter Paradise. Like pilgrims, spend a part of each day during Hajj sitting together as a family and asking for Allah's forgiveness. Ask aloud for specific things, for your children to hear your faults, so they realize you are also a slave of Allah. They will learn from this humility, and turn it on themselves, Allah willing.

Keep up with the pilgrims

Another way to stay connected to the pilgrims is to do a day-by-day commentary. Each day, follow along on the Hajj journey and discuss the significance of each part of the pilgrimage. Tracing through the steps can be meaningful to children, and certainly helps them to have a better understanding about Hajj and what goes on there. For younger ones, you can actually set up a make believe Hajj landscape in your home, and go through the movements together. Take a large men's work shirt, and dress yourself and children as pilgrims and go on "Hajj." For older children, deeper discussions about the underlying significance of Hajj and each act of it are more appropriate. For the teenagers, have a Hajj gathering for their friends. Prepare an entire evening about the Hajj, which can include asking them to act it out.

Use Hajj to breakdown divisions within our own communities

Arabs, Converts, Africans, Americans ...how many ways do we group and segregate our communities? I can honestly say I sadly have witnessed real anger and bitter, burning emotions fueled by cultural divisions between Muslims. I heard them straight from the mouths of my students and witnessed in my classroom the ugly head of racism veer up and roar. At first I thought the kids were joking, but it was serious business—the Arabs vs. the Desis. Without encouragement from parents and peers, these children would not have yet had the life experience to feel such deep and dividing emotion. Hajj represents one of the most precious facets of Islam—humans are equal in the eyes of Allah except for ways only seen by Him. Use this unifying theme of Hajj to build a sense of brotherhood (and sisterhood) in the hearts of your children. Talk about skin color, nationalities, and languages as mere signs of creation. Teach them the beauty of diversity and the rainbow of humanity that shines brilliantly nowhere else on Earth as it does on Hajj.