Educational Situations from the School of Hajj - II 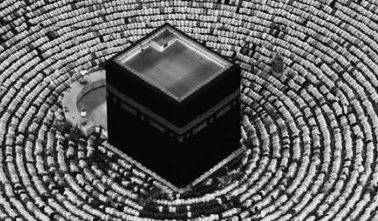 Islamic Monotheism, Following the Sunnah of the Prophet and Unity

There are other educational reflections pointed out by Mr. Shaa’i‘ ibn Muhammad Al-Ghubayshi, from the educational supervision center, including:

First: Tawheed (to affirm the Oneness of Allah The Almighty):

The greatest manifestation of the care for and importance of Tawheed (monotheism) is shown in the fact that the wisdom lying behind building the House is to affirm the Oneness of Allah The Almighty, and turn the direction of the people from the different parts of the world to it in order to revive the rite of dedicating worship to Allah Only, Whom has no partner, as He Says (what means): {And [mention, O Muhammad], when We Designated for Ibraaheem [Abraham] the site of the House, [saying], "Do not associate anything with Me and purify My House for those who perform Tawaaf and those who stand [in prayer] and those who bow and prostrate.} [Quran 22:26]

in which he said, in description of the Hajj of the Prophet

Second: Following and Imitating the Messenger of Allah

. The pilgrim is brought up to follow the guidance of the Messenger of Allah

in all his life affairs. The pilgrim follows the guidance of the Messenger of Allah

in the rituals of Hajj in response to his statement

: "Take (and learn) your rituals from me." An aspect of the pilgrim's upbringing is to abide by the guidance of the Messenger of Allah

in all that he does and leaves. In confirmation of that, Allah The Almighty Says (what means): {There has certainly been for you in the Messenger of Allah an excellent pattern for anyone whose hope is in Allah and the Last Day and [who] remembers Allah often.} [Quran 33:21] The school of Hajj brings up the Muslim on the fact that goodness and prosperity lie in returning to the guidance of the Prophet, Muhammad

in order to restore its lost honor and glory.

The school of Hajj brings up the people on Islamic brotherhood. The pilgrim feels the meaning of Islamic brotherhood through his meeting with his fellow Muslims coming from the different parts of the world, and the various countries and regions. He sees them shaking hands in harmony and mutual sympathy, love, cooperation and tolerance, their motto being that the relationship of religion is the strongest.

The school of Hajj brings up the Muslim individual and the Islamic society, Ummah and world on one of the greatest principles of this religion, i.e. Islamic unity. The pilgrim perceives that Hajj is the standard of unity. Hajj makes all the people equal in their deeds, clothing, rites, Qiblah and sites. No one is superior to another. The king and slave, the rich and poor, the dignitary and the commoner: all are in one scale.

All the people are equal in their rights and duties, as well as in this House; the resident therein is not superior to the outsider or the traveler: all are equal in the Sacred House. There is no discrimination on the basis of color or nationality, and no one has the right to differentiate between them.

That is a unity of feelings as well as of rites, goal, deed and word: "All the people come from Aadam (Adam), and Aadam is created from dust: no Arab is superior to a non-Arab, nor a white-complexioned to a black-complexioned except by virtue of piety."

"More than two million Muslims stand together in one place, and put on the same clothing to achieve the same goal, under the same standard, invoke the same Lord, and follow the same Prophet. Which unity is greater than that?" [Maqaasid Al-Hajj: by Yahya Al-Yahya]

The school of Hajj brings us up to feel the pain of the Muslims all over the world. No matter how far our houses and countries keep us from one another, we are like one body. It was narrated on the authority of An-Nu‘maan ibn Basheer

that he said that the Messenger of Allah

said: "The example of the believers in their mutual affection, mercy and sympathy is like one body, if one part of it aches, the whole body will share insomnia and fever with it." [Al-Bukhari and Muslim]

The school of Hajj releases Muslims from their sentimental isolation from their cases, problems, hopes and pain, and dissipates the media siege and concealment imposed upon them.

The school of Hajj brings up the pilgrim to remember Allah. The Remembrance of Allah is the first purpose intended by Allah in the worship of Hajj. In confirmation of that, Allah The Almighty Says (what means): {And proclaim to the people the Hajj [pilgrimage]; they will come to you on foot and on every lean camel; they will come from every distant pass – That they may witness benefits for themselves and mention the Name of Allah on known days…..} [Quran 22:27-28] The journey of Hajj, from the beginning to the end, is Remembrance of Allah The Almighty. The pilgrim remembers Allah with Talbiyah, during Tawaaf and Sa‘y, and climbs up to (the mount of) ‘Arafah to invoke and remember Allah. It was narrated on the authority of ‘Amr ibn Shu‘ayb from his father from his grandfather that he said that the Prophet

said: "The best invocation is that of the Day of ‘Arafah, and the best of what I and the Prophets before me said is: 'There is no other deity but Allah Alone. He Has no partner. To Him belongs the dominion and to Him belongs the praise and He Is over all things Competent.'" [At-Tirmithi] Then, the pilgrim leaves ‘Arafah for Muzdalifah, the Holy site, in order to remember Allah, in response to His statement (what means): {…But when you depart from ‘Arafat, remember Allah at Al-Mash‘ar Al-Haraam. And remember Him, as He Has Guided you, for indeed, you were before that among those astray. Then depart from the place from where [all] the people depart and ask Forgiveness of Allah. Indeed, Allah Is Forgiving and Merciful.} [Quran 2:198-199]

Seventh: Opposition of and Disassociation from the Polytheists:

Allah The Almighty Says (what means): {And [it is] an announcement from Allah and His Messenger to the people on the day of the greater pilgrimage that Allah Is disassociated from the disbelievers, and [so is] His Messenger…..} [Quran 9:3] Hajj is a good opportunity to consolidate the belief of allegiance and disassociation in the hearts of the believers, especially after it has weakened and faded in the breasts of many people. The school of Hajj revives disassociation from the polytheists. The Messenger of Allah

was eager to oppose the polytheists during his journey of Hajj. He said to the people, in reference to the polytheists: "Our guidance opposes their tradition." [Al-Bayhaqi and Al-Haakim who tells that it meets the conditions stipulated by Al-Bukhari and Muslim, although they did not narrate it; and Ath-Thahabi concurs with him]

According to Dr. ‘Abdul-‘Azeez Aal ‘Abdul-Lateef, the Messenger of Allah

The polytheists used to leave Muzdalifah, the Holy Site, after sunrise, thereupon the Messenger of Allah

opposed them and departed therefrom before sunrise. Furthermore, the Messenger of Allah

cancelled out the pre-Islamic habits and traditions, as shown in his Khutbah during the Farewell Hajj, in which he said: "Verily, everything belonging to the pre-Islamic days should be underneath my feet, fully abolished."

Eighth: Disciplining the Soul and Training it in Patience and Enduring Difficulties:

One of the clearest lessons which clarifies itself clearly in the school of Hajj is to train the soul in patience and enduring difficulties, in the way of pleasing Allah The Almighty. In confirmation of that, Allah The Almighty Says (what means): {O you who have believed, seek help through patience and prayer. Indeed, Allah Is with the patient.} [Quran 2:153]

Patience is the best fruit the believer is made successful to obtain. It was narrated on the authority of ‘Abu Sa‘eed Al-Khudri

that he said that the Messenger of Allah

said: "No one is given anything better and more extensive than patience." [Al-Bukhari, Muslim, Abu Daawood, At-Tirmithi and An-Nasaa’i] ‘Umar ibn Al-Khattaab

said, "We have discovered that the good of our living lies in patience." ‘Ali ibn Abi Taalib

said, "Verily, patience is a mount which never slips, and contentment is a sword which never wearies." Ibn Qayyim al-Jawziyyah

said, "Verily, Allah The Almighty Has Made patience a mount which never slips, a sharp sword which never wearies, a soldier that is never defeated, and an impenetrable fort which is never destroyed nor breeched."

Ninth: Confidence in the Support of Allah for Islam and Muslims:

The school of Hajj implants in the soul confidence in the fact that Allah Will Support and Enable religion, and no matter how long the dark night of disbelief and falsehood might be, the daybreak (of belief and truth) is about to rise. The assembly of this great number of Muslims during the days of Hajj, is but glad tidings of a new and near dawn for the honor of Islam and Muslims. When the pilgrim sees the delegations of pilgrims coming from all parts of the world, and even from the countries which wage war against Islam and Muslims, and when he sits with the Muslim delegates who report to him how the people hasten to embrace Islam, and long to know it, and relate to him the news of the repentant people, even in the row of the artists, then he becomes more confident and certain of the Support of Allah for Islam and Muslims, and of the fact that the future will be for this religion. In confirmation of that, Allah The Almighty Says (what means): {It is He Who Has sent His Messenger with guidance and the religion of truth to manifest it over all religion, although they who associate others with Allah dislike it.} [Quran 9:33]

said: "This matter [i.e. Islam] will prevail everywhere night and day prevails, and Allah Will not Leave a single urban or nomadic household but Will Make Islam enter it through the glory of Islam and its followers and the disgrace of disbelief and its associates." [Ahmad]

It was narrated on the authority of Ubayy ibn Ka‘b

from the Messenger of Allah

that he said: "Give this Ummah the glad tidings of glory, victory and enablement (on earth). Whoever among them does the deed of the Hereafter just for the sake of this world, will have no share in the Hereafter." [Ahmad, and his son ‘Abdullah in his Zawaa’id; and al-Haakim who renders it Saheeh; and Ath-Thahabi concurs with him; and al-Albaani renders it Saheeh]

Hajj is a school of upbringing on the virtuous morals of forbearance, pardon, forgiveness, tolerance, favoring others over oneself, mercy, cooperation, doing good, spending, generosity, munificence, and so on. It is a journey which reveals the people's morals, and contributes in changing bad conduct into good. Many pilgrims return from their journey of Hajj with a face different from that with which they left. Allah The Almighty Says (what means): {Hajj is [during] well-known months, so whoever has made Hajj obligatory upon himself therein [by entering the state of Ihraam], there is [to be for him] no sexual relations and no disobedience and no disputing during Hajj. And whatever good you do – Allah Knows it. And take provisions, but indeed, the best provision is fear of Allah. And fear Me, O you of understanding.} [Quran 2:197]