In the Shadow of Hajj 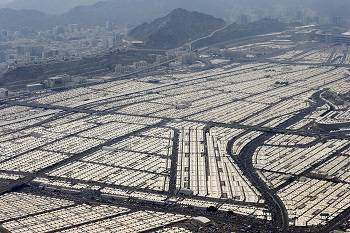 Allah, the Exalted, Says (what means): {And [mention, O Muhammad] when We designated for Ibrahim (Abraham) the site of the House, [saying], “Do not associate anything with Me and purify My House for those who perform Tawaaf and those who stand [in prayer] and those who bow and prostrate. And proclaim to the people the Hajj [pilgrimage]; they will come to you on foot and on every lean camel; they will come from every distant pass—that they may witness benefits for themselves and mention the Name of Allah on known days over what He has provided for them of [sacrificial] animals. So eat of them and feed the miserable and poor. Then let them end their untidiness and fulfill their vows and perform Tawaaf around the ancient House.”} [Quran 22:26-29]

He commanded him to establish the Ka‘bah on the foundation of Tawheed, to Him alone and not to anyone else. He ordered Ibraaheem

after finishing the building of the Ka‘bah on the foundation of Tawheed, to proclaim Hajj among people. Allah, the Exalted, promised Ibraaheem

that people would answer his call, flocking from every corner of the globe. Ibraaheem

was promised that the pilgrims would hasten to answer his call, walking or riding on their lean mounts, tired as they may be due to the exerted efforts and hunger. Allah, the Exalted, Says (what means): {… And proclaim to the people the Hajj [pilgrimage]; they will come to you on foot and on every lean camel; they will come from every distant pass…} [Quran 22:26-29]

The promise of Allah, the Exalted, is still being fulfilled from the call of Ibraaheem

until today. It will be fulfilled till the end of time. The hearts of people are still inclined to the Sacred House of Allah. They feel a stab of longing that makes them yearn to see and circumambulate it. Both the rich, who can afford a mount or a means of transportation, and the poor and destitute people, who do not find anything but their own feet, crave to circumambulate the Ka‘bah. Tens of thousands of pilgrims flock from faraway lands in response to the call of Allah, which Ibraaheem

proclaimed thousands of years ago.

The Verses Highlight Some of the Features and Objectives of Hajj:

Allah, the Exalted, Says (what means): {That they may witness benefits for themselves and mention the Name of Allah on known days over what He has provided for them of [sacrificial] animals. So eat of them and feed the miserable and poor. Then let them end their untidiness and fulfill their vows and perform Tawaaf around the ancient House.”} [Quran 22:26-29]

The benefits that the pilgrims reap from the Hajj are many. Hajj is a profitable trade season and a great conference of faith. It is a profitable trading season and a blessed worshipful season as well. It is an international conference and an opportunity of meeting together, cultivating mutual acquaintance, and promoting good fellowship. It is an annual conference for fostering the bonds of faith and brotherhood among the Muslims and for coordination and cooperation. It is a religious duty in which the world and the Hereafter meet and in which old and new memories of the monotheistic creed meet. The owners of goods and traders find a profitable trade season in the pilgrimage as fruits and goods from every corner of the world are brought to the Sacred Places. Pilgrims come from all countries, carrying various goods from their countries. All the goods that are dispersed across the earth in all seasons are gathered in the Holy Places in one season. Hajj is a great trading season, an exhibition of products, and an annual global market.

Hajj is also a blessed spiritual season during which the souls are purified and the hearts savor proximity to Allah, the Exalted, in His Sacred House. They shiver with love and longing for the Ka‘bah. They circumambulate it and enliven the old memories that hover in the horizons near and far.

For instance, the memory of Ibraaheem

as he bid farewell to his dear son and the apple of his eyes, Ismaa‘eel (Ishmael)

in the barren valley of Makkah. His heart was throbbing with fear, supplicating his Lord with (what means): {Our Lord, I have settled some of my descendants in an uncultivated valley near Your sacred House, our Lord, that they may establish prayer. So make hearts among the people incline toward them and provide for them from the fruits that they might be grateful.} [Quran 14:37]

as she was searching for water for herself and her baby in the burning desert around the Ka‘bah. She was running and scrambling between As-Safa and Al-Marwah, weak as she must have been with thirst, tired as she must have been, and heartbroken and anxious as she must have been for her child. She came back to her child after the seventh round, shattered by despair, to find the spring flowing between the hands of her beautiful baby. The water of Zamzam, the fountain of mercy, overflowed in the barren desert.

The memory of Ibraaheem

as he saw the vision in which he was ordered to slaughter his son. He did not hesitate to fulfill the Command of His Lord and sacrifice his dear son. Ibraaheem

displayed commendable obedience to his Lord, rising in the distant horizon of submission to the Creator. He said to his son, “O son, I saw in a vision that I should sacrifice you. What should we do?” The dutiful son replied with a serene and obedient heart, “Obey your Lord, father.” Allah, the Exalted, Says (what means): {So We gave him good tidings of a forbearing boy. And when he reached with him [the age of] exertion, he said, "O my son, indeed I have seen in a dream that I [must] sacrifice you, so see what you think." He said, "O my father, do as you are commanded. You will find me, if Allah wills, of the steadfast."} [Quran 37:101-102]

The mercy of Allah, the Exalted, was manifested in the ransom. Allah, the Exalted, Says (what means): {We Called to him, "O Ibrahim, You have fulfilled the vision." Indeed, We thus reward the doers of good. Indeed, this was the clear trial. And We ransomed him with a great sacrifice.} [Quran 37:104-107]

Allah, the Exalted, also Says (what means): {So We gave him good tidings of a forbearing boy. And when he reached with him [the age of] exertion, he said, "O my son, indeed I have seen in a dream that I [must] sacrifice you, so see what you think." He said, "O my father, do as you are commanded. You will find me, if Allah wills, of the steadfast."} [Quran 37:101-102]

Ibraaheem and Ismaa‘eel, may Allah exalt their mention, built the Ka‘bah together with submissive and attentive hearts. Allah, the Exalted, Says (what means): {And [mention] when Ibrahim was raising the foundations of the House and [with him] Ismaa‘eel, [saying], "Our Lord, accept [this] from us. Indeed You are the Hearing, the Knowing. Our Lord, and make us Muslims [in submission] to You and from our descendants a Muslim nation [in submission] to You. And show us our rites and accept our repentance. Indeed, You are the Accepting-of-Repentance, the Merciful."} [Quran 2:127-128]

These flashbacks and memories bubble up to the surface at the sight of the House of Allah, which contains many valuable memories. The memory of ‘Abd al-Muttalib as he vowed to sacrifice his tenth son for Allah if he was blessed with ten children. His tenth son was ‘Abdullah. ‘Abd al-Muttalib, the grandfather of the Prophet

was eager to fulfill his vow but hated to lose his dearest son. People suggested the idea of offering sacrificial animals instead. The people of Makkah loved ‘Abdullah dearly; they said, “Do not slay your son. Draw lots between him and camels. Give your Lord till He is satisfied.” ‘Abd al-Muttalib drew lots between his son ‘Abdullah and ten camels, as was customary among the Arabs. However, the lot fell upon ‘Abdullah, the father of Prophet Muhammad

. He chose another arrow from the Qidah (featherless arrows) around the Ka‘bah, and each time he picked the arrow on which the name of his son ‘Abdullah was written. He doubled the number of camels. When ‘Abd al-Muttalib increased the number of camels to one hundred, the lot fell upon them. Thus, ‘Abdullah was saved from death in order to marry Aaminah and bear the purest and most honorable man, i.e. Muhammad

. Then ‘Abdullah died, shortly after the marriage, as if Allah, the Exalted, saved him only for this great purpose.

The memories keep flashing back from the life of Muhammad

as he lifted the Black Stone with his blessed hands and placed it in its due place so as to extinguish the strife that almost erupted between the vying tribes. The memories of him

as he prayed, circumambulated the Ka‘bah, preached, and observed I‘tikaaf (seclusion in the Mosque) are flashing back. His memories are vibrantly revived in the minds. They are engraved in the conscience, as if the pilgrim is already watching them with his very eyes as he is immersed in those great memories and reflections. The memories and steps of the crowds of his Companions

on this blessed soil around the Ka‘bah, flicker before the pilgrims. They are so vivid and clear, almost heard by the ear and almost seen by the eyes.

Hajj is a universal gathering and international conference of faith for all Muslims. It is a great assembly where they see their origins in the depths of history since their father Ibraaheem

. Allah, the Exalted, Says (what means): {…[It is] the religion of your father, Ibrahim. Allah named you “Muslims” before [in former scriptures] and in this [revelation] that the Messenger may be a witness over you and you may be witnesses over the people....} [Quran 22:78]

In the Hajj, Muslims find the pivot around which they all revolve; the shared Qiblah (prayer direction—the Ka‘bah in Mecca). The Qiblah that bonds them all together and the banner under which they are all united, i.e. the banner of Islam and the flag of Tawheed. The one and only banner in whose shadow the differences of races, colors and backgrounds vanish. The banner that encapsulates their strength, which they forget sometimes. The power of assembly, unity, and interdependence that bonds millions of Muslims all over the world. The banner that bonds these millions whom none could overcome if they firmly held on to their one banner—the banner of the Islamic creed and Tawheed.