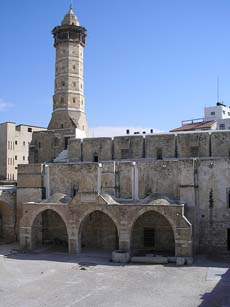 Heraclius now ordered Artabun, a noted general, to gather troops in Ajnadain. Artabun kept a huge army under his direct command and two other detachments in Ramlah and . The opponents of Islam were well-equipped and huge in number, awaiting the arrival of the Muslim force. 'Amr bin Al-'Aas

. A fierce battle was fought in Ajnadain. It was a conflict similar to Yarmook. Artabun could not muster courage to face 'Amr bin Al-'Aas and fled to and the city fell to the Muslim forces.

convened a meeting of all the distinguished Companions and consulted them. 'Uthman

declared that the Christians had been struck with terror and had lost heart and that if the Caliph were to reject their request, they would be still more humiliated, and consider that the Muslims regarded them with utter contempt, they would lay down their arms unconditionally. 'Ali

however, dissented from this view and gave the contrary opinion; and 'Umar shared the same opinion.

On this historic mission to a bag full of parched barley meal, a camel, a slave, and a wooden cup were all the belongings of 'Umar

the Chief of the Muslims, when he left Al-Madeenah, the headquarters of Islam. Leaving 'Uthman

in charge of Al-Madeenah, he set out on the journey noted for its strain and stress.

It was a unique scenario of Islamic equality and human dignity, that at times, the Caliph sat on the camel and the slave walked along holding the rein of the camel and at other times, vice versa. It was the journey of a magnificent and powerful Islamic ruler whose cavalry had already trampled down palaces and crowns and thrones under the hooves of its horses. It was Rajab 16 AH (After Hijrah), when Mada'in and Antakiyah () had been conquered.

The commanders of the Muslim forces at and had already been informed about the movement of the Caliph of Islam. Thus Yazeed bin Abu Sufyan, Abu 'Ubaydah bin Al-Jarrah and Khalid bin Al-Waleed

received the Caliph of Islam with exemplary honor. However, when 'Umar

saw them arrayed in brilliant dresses and imposing appearance, he flew into a fit of rage at the sight of them and remarked: "Within the short span of two years have you fallen into Persian habits?" However, when the officers explained that they had their weapons beneath their luxurious dresses and they had not lost their Islamic character, the Caliph gained peace of heart.

The Caliph stayed for a long while at Jabiah, where some of the nobles of the city proceeded to see him and the treaty was drawn up there. The elite of the Companions like Khalid bin Al-Waleed, 'Amr bin Al-'Aas, ‘Abdur-Rahman bin ‘Awf and Mu'awiyah

During 'Umar's stay in 'Amr bin Al-'Aas had obtained his consent for launching an attack on . 'Amr

marched to at the head of 4000 troops. In his dispatch from Al-Madeenah, the Caliph of Islam put before Muqawqis, the king of three conditions: accept Islam or pay Jizyah (poll protection tax as a sign of their surrender to Muslims) or prepare for battle. The Roman general Artabun along with his entire army was in at that time. First Artabun moved forward and then fled the battlefield after experiencing a decisive defeat.

Afterwards the Muslim army advanced further and laid siege around 'Ayn ash-Shams and from there dispatched two squadrons to besiege Farama and . Both the cities fell to the Muslim troops. 'Amr bin Al-'Aas then sent Az-Zubayr bin Al-Awwam

to Fustat as a commander; he conquered the fortified citadel after a heavy encounter. 'Amr bin Al-'Aas attacked which fell after a siege of three months.

The area of conquests during the Caliphate of 'Umar

is said to have spread over 2,2,500,000 square miles. This was the result of victories won by people who were once considered “small and wretched” against the mighty empires of and . The conquests of the Caliph 'Umar include Jazeerah, Khurasan, and . The provinces carved out by 'Umar

himself in 22 AH, were Makkah, Al-Madeenah, Syria, Jazirah, Basrah, Kufah, Egypt, Palestine, Khurasan, Azerbaijan and Persia. Some of them were equal to two provinces in area, with two centers of power and separate governors and their administrations.

invented and enforced many things in the sphere of financial, political, administrative and social spheres, which are accomplishments first instituted by him. Some of them are mentioned below:

·       He established a regular department for the military; a separate department for financial affairs, and fixed the salaries for men in voluntary services.

·       He also introduced the practice of measuring the land and keeping its record, adopted a census system, he had canals dug and populated cities like Koofah, Basrah, Jeezah, Fustat () and delineated provinces out of the occupied territories.

·       He was first to allow traders of rival countries to enter Muslim territories for the purpose of business.

·       He was also the first to make use of the whip for corporal punishment and set up a prison and police department.

·       He introduced a system of collecting direct information concerning states and conditions of the masses, he established a secret intelligence service.

·       He had wells bored, built houses and fixed a daily payment for the destitute among the Christians and the Jews.

The next day when the people assembled in the mosque to perform the morning prayer, Fayrouz came into the mosque armed with a poisonous dagger. As the ranks of the congregation were put straight and in order, and 'Umar

came up and took his position at the head of the ranks to lead the prayer, Fayrouz suddenly rushed from the first rank and struck 'Umar six consecutive blows, one of which fell below his navel.