A fishy tale: transition from water to land 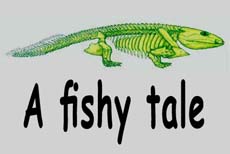 Evolutionists have been digging fossil strata for about 140 years looking for these hypothetical forms, they have found millions of invertebrate fossils and millions of fish fossils; yet nobody has ever found even one that is midway between them.

An evolutionist paleontologist, Gerald T. Todd admits this fact in an article titled “Evolution of the Lung and the Origin of Bony Fishes” :

"All three subdivisions of the bony fishes first appear in the fossil record at approximately the same time. They are already widely divergent morphologically, and they are heavily armored. How did they originate? What allowed them to diverge so widely? How did they all come to have heavy armor? And why is there no trace of earlier, intermediate forms?"

The evolutionary scenario goes one step further and argues that fish evolved from invertebrates, then transformed into amphibians. But this scenario also lacks evidence. There is not even a single fossil verifying that a half-fish/half-amphibian creature has ever existed. This fact is confirmed (albeit reluctantly) by a well-known evolutionist authority, Robert L. Carroll, who is the author of Vertebrate Paleontology and Evolution as: “We have no intermediate fossils between rhipidistian fish (his favourite ‘ancestors’ of tetrapods) and early amphibians.” Two evolutionist paleontologists, Colbert and Morales, comment on the three basic classes of amphibians – frogs, salamanders, and caecilians:

"There is no evidence of any Paleozoic amphibian combining the characteristics that would be expected in a single common ancestor. The oldest known frogs, salamanders and caecilians are very similar to their living descendants."

Until about fifty years ago, evolutionists thought that such a creature indeed existed. This fish, called a Coelacanth, which was estimated to be 410 million years of age, was put forward as a transitional form with a primitive lung, a developed brain, a digestive and a circulatory system ready to function on land and even a primitive walking mechanism. These anatomical interpretations were accepted as undisputed truth among scientific circles until the end of the 1930s. The Coelacanth was presented as a genuine transitional form that proved the evolutionary transition from water to land.

However, on December 22, 1938, a very interesting discovery was made in the . A living member of the Coelacanth family, previously presented as a transitional from that had become extinct 70 million years ago, was caught! The discovery of a “living” prototype of Coelacanth undoubtedly gave evolutionists a severe shock. The evolutionist paleontologist J. L.B. Smith said that he could not have been more surprised if he had come across a living dinosaur. In the years to come, 200 Coelacanths were caught many times in different parts of the world.

Living Coelacanths revealed how far the evolutionists could go in making up their imaginary scenarios. Contrary to claims, Coelacanths had neither a primitive lung nor a large brain. The organ that evolutionist researchers proposed as a primitive lung turned out to be nothing but a lipid pouch. Furthermore, the Coelacanth, which was introduced as “a reptile candidate getting prepared to pass from sea to land,” was in reality a fish that lived in the depths of oceans and never approached a distance of less than 180 meters from the surface.

Why Transition From Water to Land is Impossible

Evolutionists claim that one day, a species dwelling in water somehow stepped onto land and was transformed into a land-dwelling species.

There are a number of obvious facts that render such a transition impossible:

1. Weight-bearing: Sea-dwelling creatures have no problem in bearing their own weight in the sea.

However, most land-dwelling creatures consume 40 percent of their energy just in carrying their bodies around. Creatures making the transition from water to land would, at the same time, have had to develop new muscular and skeletal systems (!) to meet this energy need, and this could not have come about by chance mutations.

2. Heat Retention: On land, the temperature can change quickly and fluctuates over a wide range. Land-dwelling creatures possess a physical mechanism that can withstand such great temperature changes. However, in the sea, the temperature changes slowly and within a narrower range. A living organism with a body system regulated according to the constant sea temperature, would need to acquire a protective system to ensure minimum harm from the temperature changes on land. It is preposterous to claim that fish acquired such a system by random mutations as soon as they stepped onto land.

3. Water: Since it is essential for metabolism, water needs to be used economically due to its relative scarcity on land. For instance, the skin has to be able to permit a certain amount of water loss, while preventing excessive evaporation simultaneously. That is why land-dwelling creatures experience thirst, something the sea-dwelling creatures do not do. For this reason, the skin of sea-dwelling animals is not suitable for a non-aquatic habitat.

4. Kidneys: Sea-dwelling organisms discharge waste materials, especially ammonia, by means of their aquatic environment. On land, water has to be used economically. This is why these living beings have a complex excretory system comprising the kidneys and other organs. Thanks to the kidneys, ammonia is stored by being converted into urea and the minimum amount of water is used during its excretion. In addition, new systems are needed to support the kidney's functioning. In short, for the passage of organisms from water to land to have occurred, living things without a kidney would have had to develop a kidney system all at once.

5. Respiratory system: Fish "breathe" by taking in oxygen dissolved in water that they pass through their gills. They cannot live for more than a few minutes out of water. In order to survive on land, they would have to acquire a perfect lung system all of a sudden.

It is most certainly impossible that all these dramatic physiological changes could have happened in the same organism at the same time, and all by chance.