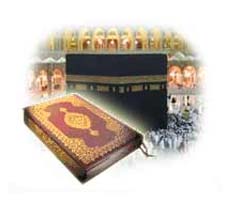 In the name of Allah, the Most Beneficent, the Most Merciful

Almighty Allah Says (what means): "Indeed, We have granted you, [O Muhammad], Al-Kawthar. So pray to your Lord and sacrifice [to Him alone]. Indeed, your enemy is the one cut off". [Quran: 108:1-3]

It is narrated that Anas bin Maalik, may Allah be pleased with him, said: "(Once), the Messenger of Allah

was dozing; then, he raised his head and smiled, then, either he said to them (his companions), or they asked him: "Why did you smile?" He

replied: "Indeed, a Soorah (Quranic chapter) has (just) been revealed to me." Then he

recited (what means): "In the Name of Allah, the Most Beneficent, the Most Merciful, verily, We have given you Al-Kawthar..." to the end of the Soorah. Then he

asked: "Do you know what Al-Kawthar is?" They replied: "Allah and His Messenger know best." He

said: "It is a river in granted to me by my Lord, the Almighty and All-Powerful, in which is great goodness; its drinking vessels are as (numerous as) the heavenly bodies. It will refuse to allow one of the slaves to drink, and I (i.e., the Prophet

) will say: 'O my Lord! He is one among my community.' But it will be said to me: 'You know nothing of the innovations (in religion) that they practiced after you.'"

). Its drinking vessels are as numerous as the stars in the sky. [Muslim, Abu Daawood & An-Nasaa'i]

As for the saying of Allah which means: "Indeed, We have granted you, [O Muhammad], Al-Kawthar" [Quran 108:1] it has already been mentioned that Al-Kawthar is a river in Paradise; Imaam Ahmad

narrated on he authority of Anas, may Allah be pleased with him, that he recited this Soorah and then said: "The Messenger of Allah

said: "I have been given Al-Kawthar, a flowing river in Paradise which does not flow along a normal channel, rather, its banks are domes of pearl. I struck its earth with my hand and it was a strong-smelling musk, and its pebbles were pearls."

about Al-Kawthar and that he

replied: "It is a river in Paradise, given to me by my Lord, whose colour is whiter than milk and whose taste is sweeter than honey; upon it are birds whose necks are like those of camels." 'Umar, may Allah be pleased with him, said: "O Messenger of Allah! They (i.e., the birds) seem so blissful!" He

replied: "He who eats from them is more blissful (in luxury) than them O 'Umar!"

"So pray to your Lord and sacrifice [to Him alone]." [Quran 108:2] That is, since We have given you such blessings in this world, and in the Hereafter, including the river described previously, then devote your obligatory and optional prayers to your Lord alone; likewise, your sacrifices and all your other acts of worship. Worship Allah Alone, without associating partners with Him, as in the saying of Allah (which means): "Say: `Indeed, my prayer, my rites of sacrifice, my living and my dying are for Allah, Lord of the worlds. No partner has He. And this I have been commanded, and I am the first [among you] of the Muslims.'" [Quran 6:162-163]

Ibn `Abbaas, `Ataa', `Ikrimah, Mujaahid and Al-Hasan, may Allah be pleased with them, are all agreed that the word Sacrifice here means Halaal (Islamic) slaughter. Most of the scholars from amongst the pious Salaf (early Muslim generations) agreed on this and it is contrary to the practices of the idolaters, who prostrated themselves before false gods and sacrificed animals in their name. Allah, the Most High Says (what means): "And do not eat of that upon which the name of Allah has not been mentioned…" [Quran: 6:121]

and hates that which you have brought (i.e. the Message of Islam) is defective, insignificant, despised and is cut off (from remembrance).

According to Ibn `Abbaas, Mujaahid, Sa'eed Ibn Jubayr and Qataadah, may Allah be pleased with them, this Soorah was revealed in regard to Al-'Aas bin Waa'il, who used to say, whenever Allah's Messenger

was mentioned: "Leave him, for he is a man who is cut off and is of no consequence, and if he were killed, he would be forgotten." Therefore, Allah revealed this Soorah.

reported that Ka'b Ibn Al-Ashraf approached Makkah and the people of Quraysh said: "You are their leader (i.e. the people of Makkah). Do you not see this weak, feeble, despised man (Muhammad

) who is without family or any who might help him and who is cut off from his own people? He claims that he is better than we! We are the people of (the House of) the pilgrims, the custodians (of the Ka`bah), the suppliers of water (to the pilgrims)." So Ka'b said: "You are better than he" and Allah therefore revealed this Soorah. This is an authentic narration.

said that it was revealed concerning Abu Lahab (the Prophet's disbelieving uncle); this was when the Prophet's son died and Abu Lahab went to the polytheists and said: "When his sons die, he will no longer be remembered." Far from that! On the contrary, Allah has preserved his memory for the entire world to witness and has placed the responsibility of (implementing) His Revealed Law upon their shoulders forever, until the Day of Congregation (Doomsday).