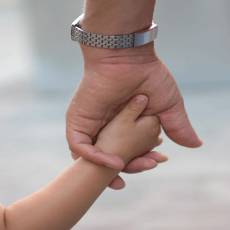 Just as a child should be taught ritual acts of worship, he should also be taught good habits and etiquettes until they become second nature to him.

Good manners are an acquired trait that must be adopted from a young age. Of such manners are the following:

Being respectful and dutiful to parents:

The first person from whom a child learns good manners is the father. If a child is raised in a good Islamic home, then it would be natural for him to treat his parents respectfully.

Allah Says (what means): "And your Lord has decreed that you worship none but Him. And that you be dutiful to your parents. If one of them or both of them reach old age in your life, never say 'uff’ (an expression of displeasure), nor shout at them but address them in terms of honour. And humble yourself to them out of mercy and say, 'My Lord! Bestow on them Your Mercy as they did bring me up when I was small.'" [Quran, 17:23,24]

Allah Says (what means): ''Worship Allah and associate none with Him in worship, and do good to parents, kinsfolk, orphans, the needy, the neighbor who is near of kin, the neighbor who is a stranger, the companion by your side, the wayfarer (you meet), and those (slaves) whom your right hands possess. Verily, Allah does not like such as are proud and boastful. " [Quran, 4:36]

The fulfillment of this Divine command can be accomplished only by sound cultivation which makes them grow attached to their relatives out of obedience to Allah.

said: "The example of the believers in their reciprocal love and mercy is like a human body, when one of its organs suffers, the rest of the body remains awake and suffers fever." [Muslim]

Brotherly love and believers' solidarity must be embedded in children's minds and that the believers are brothers-in-faith. For example to follow the pious predecessors, the Muhajireen and the Ansaar, may Allah be pleased with them, whose brotherly love and altruism Allah commands in His Book.

Giving a friendly gesture or a happy greeting to Muslim brothers generates friendliness in their hearts and, strengthens the love among the believers. This indeed is a fine trait, which is instructed by Allah, the Exalted. He describes the believers by saying (what means): "Muhammad is the Messenger of Allah, and those who are with him are severe against disbelievers, and merciful among themselves…" [Quran, 48:29]

saying (what means): "Had you been severe and harsh-hearted, they would have broken away from about you…" [Quran, 3:159]

Giving a good word is a type of remembrance of Allah, telling the truth, guarding one's own tongue against slandering other Muslims are good deeds. The best Muslim, according to the Prophet

is the one from whose tongue the Muslims feel safe.

Parents should make their children aware of the gravity of abusing others with their tongue and of the fact that the tongue is a double-sided and dangerous weapon. Therefore, they should be warned in particular against abusing it.

· Warning children against backbiting and slandering:

Children should be taught that backbiting is speaking slanderously about an absent person. The Prophet

said: "Do you know what back biting is?” They (companions) said: "Allah and His Messenger know best." He

said: "It is to attribute to your brother what he dislikes." He

was asked: "What do you think if what I say about my brother is true?" He

While talebearing is to circulate slanderous rumors between two persons to damage or sever the ties between them. The Prophet

said: "Talebearer will not be admitted to Paradise." [Muslim]

Deriding people in their presence by making negative facial expressions or by hand gestures while they are unaware is also forbidden in Islam.

Children must be taught to tell the truth and to keep away from lying, which is the most horrible habit. The Prophet

said: "There are four traits whoever possesses them is a sheer hypocrite, and he who possesses one of them, possesses a trait of hypocrisy unless he quits it. They are: when he speaks, he lies; and when he enters into an agreement, he acts unfaithfully; when he promises, he breaches his promise; and when he litigates, he behaves treacherously. While the liar receives the anger of Allah on the Day of Resurrection." [Al-Bukhari]

Parents should not take this evil habit lightly, or consider it funny when their children tell lies because later on, it becomes easy for them to lie without any compunction.

Among the worst of manners is reviling people and swearing at them. If this bad habit is not redressed while the child is growing up, it becomes hard for him to avoid it later on.