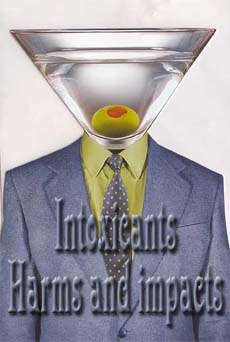 The Muslims of today, especially the youth, are facing many problems and temptations that were not there before. The youth are easily distracted by activities such as addiction to TV, addiction to video games, gambling, disco, parties, and addiction to drugs. This article will explore the harmful effects of drugs on our youth, the family, the society and most important , on our belief especially that drugs (or any intoxicant) are forbidden in Islam.

1.    An intoxicant is any substance (liquid, solid or gas) that is voluntarily taken into the body by swallowing, injection, inhaling or ingesting, which produces an effect on the brain resulting in a change of the mood of the individual.

2.    Examples of intoxicants are alcohol, wine, beer, spirits, home made alcoholic brews, all forms of drugs such as cocaine, heroin, etc.

4.  Anyone who associates in any way, with any aspect of the intoxicants (whether alcohol or drugs), whether using it, selling it, producing it, or delivering it, is a partner with the devil, since all kinds of intoxicants are the handiwork of the devil.

Young people are very gullible and vulnerable to the influences of society, their friends, TV, adults, and those that appear to be fashionable. Hence, a youth may find that all his friends have experienced the use of drugs, and now he is feeling left out because everyone else appears to be having a good time, and all his friends tease him that he is “chicken”. This unsuspecting youth then decides to 'experiment' only once, 'just to try it out."

Furthermore, if he does not have money to buy the drugs, someone may even offer it to him for free. What he does not realize, is that his first weakness, to please his friends, is the biggest mistake that he can ever make. The strategy of the drug dealers is to get as many customers as possible.

Some drug dealers are so ruthless that they give out free sweets containing drugs to school children. The trick that they use is to give free drugs to unsuspecting people. Once a person becomes addicted (hooked) he becomes a customer for life.

The addicted person will then beg, borrow, steal, prostitute themselves, just to make sure that they have money to buy drugs for their next fix. It is a vicious cycle of crime, prostitution, family breakdown, social breakdown, community breakdown. It is for this reason that intoxicant is known as the source of all evils, Islamicaly termed as the  ‘mother of all evils’.

Intoxicants with respect to their impact

There are many types of drugs available on the market. The general effect of all drugs is basically very similar, though they differ in their speed of action as well as the severity of the harm on the body. All drugs directly affect the brain, since this is the only way of causing mood changes. Some examples of drugs are as follows:

1.      Heroin, (upper drug): highly addictive opiate; gives very high rush, followed by many hours of fogginess; the addict lives day to day for the next fix.

2.      Marijuana, (downer drug): affects the parts of the brain that deals with emotions and memory.

4.      Cocaine, (upper drug): whether in powder form or crack, it is a highly addictive stimulant; addict loses interest in school, family, work, etc.

6.      Ecstasy (upper drug): powerful amphetamine that causes problems in concentration and causes the person to find difficulty in realizing the difference between fantasy and reality.

·       Physical effects: The brain is the most delicate and powerful computer- it is an amazing organ, with virtually limitless potential- it is a Gift from Allah; it has to be protected and cherished and its full potential must be utilized. The moment any person takes a drug into the body (either by nose, mouth or vein) the drug enters the blood stream and goes directly to the brain, crosses the blood-brain barrier (BBB) and occupies various receptor sites in the brain. This leads to alteration in the chemical and electrical neuronal functioning of the brain which also leads to eventual organic damage to this delicate, yet powerful organ.

These changes in the brain is what causes the state of 'addiction'- eventually, the body automatically starts craving for the damaging drug leading to a vicious cycle of abuse and further damage.

·       Social effects: The person indulged in the usage of intoxicants displays anti-social behavior such as: staying away from home; stealing; crime; job loss; withdrawal from community; embarrassing behavior in public; deterioration in relationship with parents or wife or children. The most harmful effect of drugs is on the brain.

Pregnant mothers sometimes take drugs. These drugs enter the brain of their unborn baby, so that the baby becomes addicted even before birth. When these babies are born, they show withdrawal symptoms and will develop with various learning disabilities. This is a crime against the innocent unborn child.

Sudden mood changes; unexplained weight loss and loss of appetite; no interest in school, work, life or even in themselves; no longer caring about personal hygiene, clothing and dressing; always looking disheveled; frequent prescription medication; depression and mood swings.

If there is someone in your family or close friend, who you suspect has a problem with drugs, then it is our duty to assist them in any way possible. Some suggestions in this regard are:

1.    Communicate. Don't pretend that the problem will go away or that it cannot be happening in your own family. Parents and families must learn the art of healthy, open communication and discuss issues in an open, frank and friendly atmosphere.

2.    Show sympathy. Even if it is to a stranger. The addicted person is a diseased person; so, he/she needs our help. There may have been a family problem that led the person to drugs. Or the person may have thought that it will be 'fun' just to try it out. No one deliberately says: "I want to be a drug addict." What they don't realize is, that after the first taste of the drug, 'you are hooked.’ Instead of condemning them, offer counseling, moral support, send to drug rehabilitation and offer words of encouragement.

3.    Religious figures must speak out against this evil and discuss the devastating effects of drugs on the individual, his family as well as the society.

4.    Muslim communities must provide alternative forms of recreation for their youth; these could be community centers, sports, youth camps, etc, where the youth can socialize in an Islamic environment and are then not tempted to experiment out of boredom.

5. The addicted youth should be encouraged to turn to Islam. There have been many examples of heavily addicted Muslim youth, who have been rehabilitated by turning to Islam. Today, they are totally devoted to Islam. Allah accepts sincere repentance when one intends to give up the way of the devil and rather follow the Straight Path.

6. Mothers have a very important role to play in the upbringing of their children. The whole community must work actively to rid society of drugs. Only a mother knows the pain and sorrow of seeing her beloved child being a slave to the evils of drugs. Drugs destroy the dreams of every mother.

We have a responsibility to look after our youth and protect them from the dangers of society. Our youth are our future.