The use of the Internet to propagate Islam - I 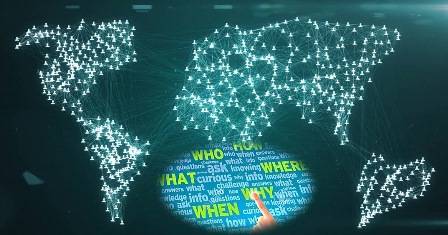 In the beginning of the year 1969 CE, in the state of , people were able to transfer data between two personal computers which were few metres apart via a telephone line, and this was the first such connection to be established anywhere.

Before this incident, such a link was only a concept which was to be implemented in the computer laboratories of the United States Department of Defence as part of their Star Wars program. The aim was to have a network fit for military use.

The number of people who connected to this initial network increased rapidly and developed at a very rapid rate, such that the number has reached more than billion people today, who are connected through millions of personal computers globally, and this, in the opinion of many, was the most important invention of the twentieth century. Allah Says (what means): “[Allah] Taught man that which he knew not.” [Quran 68: 5]

Allah has made mankind a successive authority upon the earth, wherein man lives and worships Allah; He has granted man great ability of mind and has created for him upon the earth things which he can invest in and utilize in the obedience of Allah; so glad tidings for the one who utilizes the earth's resources in the obedience of Allah and woe to those who utilize them in His disobedience.

which was narrated by Abu Hurayrah

in the book of Imam Ahmad and others

said: “The Hour will not come until trials appear in large numbers, lying becomes widespread, markets converge and time shortens.” In another narration, he

said: “Until time shortens and Harj increases.” So a companion of his asked: “What is Harj?” and he

In the past, the scholars such as Ibn Al-Khattab, Al-Khattabi, Ath-Thawri & Ibn Hajar

have interpreted the shortness of time to mean that time will lose its value and people will feel that there is not enough of it to do anything. Contemporary scholars like Shaykh ibn Baaz

: “This can be interpreted to be the contraction of distance and the time required to travel it due to aircraft and cars, as well as the closeness that people feel regarding events due to radio (which broadcasts these events).”

However, if we take a look at the invention of the Internet, we will see that it best fits as an interpretation for this narration, because the Internet has made everything seem closer and turned the entire world into a global village. As for the closeness of markets, Shaykh Mas’ood Ad-Dakheeli

said: “It seems that this is referring to how the distance between places has shortened during our time due to the various means of transportation via air and land, and due to the electronic devices, like radios and televisions, which transmit sound and images and have made the markets in different parts of earth seem near to each other, so that traders know about any changes in price anywhere in the world, and consequently raise their prices in their own locations accordingly, or decrease them if they drop elsewhere.”

Therefore, the closeness of markets is in three ways: firstly, the speed of transfer of market data, secondly, the physical proximity due to modern transportation methods, and thirdly, the similarity in prices between markets.

Anyone who is well acquainted with the Internet will realise just how closely it fits the abovementioned prophetic narration.

There is one website, for example, that has three million items and runs an international auction on a number of these items. One can buy anything via such websites, and there are very many of these on the internet. Also, one can also display on such websites what items he himself has to sell, and this is an indication that we are living at the end of time, close to the Hour, as in the aforementioned narration, and that the minor preconditions of the Hour are taking place and that there are about three of them still left to occur. After these, the ten major preconditions will start occurring. It is worth mentioning that there is nothing to prevent a major sign from occurring concurrently with some of the minor signs of the Hour, as some of the scholars noted.

The point here is the closeness of markets and the shortness of time, which is fulfilled by the Internet, and is another proof of the prophethood of the Prophet

who informed us fourteen hundred years ago about things that are taking place during our time.

: “Before the Hour, dealing in trade will become widespread.” Electronic trade has overwhelmed the markets and is in the billions of dollars. He

also informed us that of these signs will be: “…the spread of adultery and fornication” as in the narration in the book of Imam Bukhari

. In the narration of Imam Al-Hakim

said: “Immorality will spread…” - In excess of four hundred thousand pornographic websites are present on the Internet which spread immorality worldwide.

said: “Before the Hour, dealing in Riba (i.e., interest and usury) will become widespread.” It is well known that on the Internet, dealing in Riba is widespread and many banks have established websites and set the cost of a customer transaction via the Internet as only ten cents, whereas the cost of a live transaction inside a bank building costs one dollar and seven cents; this is an indication that as time passes, dealings inside bank buildings will become obsolete and all banking transactions will be done via the Internet by people who are at home or in their offices. These banks are institutions that have been established on Riba and their proliferation on the Internet has become evident. Additionally, the use of credit cards on the Internet is also widespread. The prohibited use of cards like Visa, MasterCard and American Express, all of which entail dealing in Riba, causes the wrath of Allah to befall the one using them.