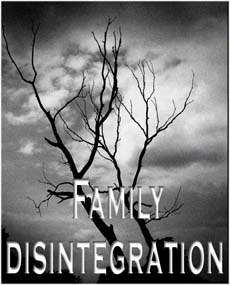 Neglecting one's family and failing to give them enough to suffice their needs results in them leaving their homes in order to find a source of income, and in many cases it leads to women committing adultery; there are many real life stories proving this, and in these cases it is not sexual desire that pushed the woman to indulge in this immorality as much as her need for money.

and said: "O Messenger of Allah! My husband Abu Sufyan is tight fisted and does not give me and my son what suffices us, so I take from his wealth without him knowing. Is this permissible?’ He

replied: “Take from his wealth what suffices you and your son without exaggeration.”

Allah the All-Knowing, Knows that if there is insufficient money in a home, it could lead to something evil, so He allows the woman to take from her husband’s wealth secretly without his permission if he is stingy and does not provide them with what suffices them; but at the same time, Islam does not oppress the husband, hence the condition was set that she takes without exaggeration and not whenever it takes her fancy.

Disclosing the wife’s secrets is another cause of family disintegration. Some people go as far as to reveal the very intimate secrets of their wives, which not only causes this problem to occur, but also reflects malicious manners and a lack of protective jealousy.

once asked his companions: “Is there any of you who, when wishing to have sexual intercourse with his wife, goes into the room, closes the door, and covers himself?” They replied, "Yes." Then he

asked: “Is there any of you who later sits with his friends and informs them about what went on between him and his wife?” His companions remained silent. After this he

said: “The similitude of those who do this is like that of a male and female devil, who meet on the road and have sexual intercourse publicly, while others are watching them.”

Undutifulness to parents is another reason behind family disintegration, because it either causes the child to be expelled from the house, which breaks the family bond, or, the son continues to oppress one or both of his parents, causing them to live a humiliated and oppressed existence in their own home, which deprives them from living a normal life. This is a common thing in families nowadays; families suffer grief and anxiety due to the undutifulness of their children, who may eventually expel their parents from their home.

A real life story and a good example of what we are saying is: …A son kicked his parents out from their home which they owned, but Allah never neglects or overlooks anything - This son’s own daughters began beating him when he grew old, because he was trying to sexually assault them.

Bad manners, which lead to immorality and wife beating - these are more reasons behind the disintegration of families. A man beats his wife and mother, curses his daughter and supplicates that she becomes sick with cancer … he neither prays nor fasts … he enters his home shouting and cursing … he blames his wife for having delivered a daughter for him, which made her worthless in his sight … he hits his daughter viciously with an electric wire … this is a true story … this is a standard result of shunning the path of Allah … the marks remained on his daughter’s back, even when she got married.

Again, this is normal for people who are not upon the straight path … when religion is removed from people’s hearts and souls they become worse than beasts, because it is only Islam that makes people behave correctly and maintain noble manners.

Sinning is another factor behind this phenomenon; a man gambles and travels for the sole purpose of gambling; when he receives his salary he squanders it in less than ten days because of his gambling … he does not worry about his wife or children … he does not attend to their needs.

Many family problems result from alcohol consumption, which is one of the major great sins … when a person is drunk he has no control over his brain - and families easily break up after this loss of control.

Many families face problems due to the shortage of money, as well as the great attachment that they have to this life; this usually leads to people becoming stingy and selfish.

A western newspaper published an article regarding a couple who had to make a choice between keeping their car or their new-born baby girl as they could not financially afford to keep both. So, they chose to keep the car and handed the baby over to a foster home, when the father was asked about this, he commented: “She might find a family who would take her in for adoption and give her a better life than what we can offer her.” The mother also assured that they made the right choice! Many parents sell their children in the west … What type of family bond do these people have? Where is mercy? Where is the love? Where is the compassion?

Greed and fighting over money adversely affects the family, and that is why you find men who wish to confiscate their wife’s salary, and fathers who deprive their daughters from marriage due to them wishing to continue receiving her salary; others convince their sisters to loan them money which they do not intend to repay while the Prophet

ruled doing this as one of the great major sins  - to borrow money with the intention of not returning it … this is how money becomes a cause of family disintegration.

Undoubtedly, another of the major causes of this phenomenon is the possession of drivers and maids in the home, especially when the maid is not a Muslim, people surrender to them their valuables such as the car and the house, but the most important thing they surrender are their children, which they give them to look after.

These people represent a great danger, but people do not take lessons from what afflicts others, the maids seduce the father and young men of the house, and likewise the drivers seduce the females. With such a setup disasters are likely to happen - especially if the household is not brought up Islamically.

Fear Allah with regards to your families … fear Allah in your households … beware of the wrath of Allah which He sends upon the oppressors. We are not only responsible for our own homes, but rather we have to advise others.

It is true that we have many good families who mix with some of these bad ones, so they should advise and instruct them, because otherwise we may be affected by their evil if we are not working on correcting it, since we do not live in isolation from one another. We must enjoin what is good and forbid what is evil, or our families may eventually become like those in the West.