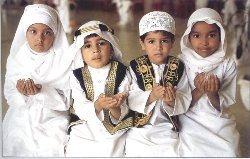 Raising children in an Islamic way in a non-Muslim society needs everyone’s effort with no exception, starting with the parents’ efforts, to the Mosque’s, to the community’s efforts. All of these roles are important. The stronger these roles are and the more mutually complementary to one another, the better the raising process will be.

The role of the Muslim community is important and is based on a number of factors, of which, the most important are:

1 – Supporting the Islamic center so that it keeps providing all the different services and programs and makes improvements.

Continuous financial supports to cover all the operating expenses and activities expenses. Every program has expenses, which are to be covered by the community. This community has to show support in an exemplary manner for the center; all its activities, the Islamic schools, the monthly utility bills and so on.

said: "When a man dies, his deeds come to an end except for three things, (and the first of them): Sadaqah Jaareyah (ceaseless charity)…" Allah, Most High, Says (what means): "…And whatever you spend in good, it is for yourselves, when you spend not except seeking Allah's Countenance. And whatever you spend in good, it will be repaid to you in full, and you shall not be wronged." [Quran 2:272]

2- Supporting the Islamic center requires also efforts and time invested in voluntary programs and projects that are frequently needed. This is met when you personally go there and take your children with you. This way, your children take part in the voluntary work. It is an important factor in increasing their tendency to work with a group than to work selfishly and individually. The Prophet

used to participate with all his companions in voluntary projects, which are beneficial to the Muslim community.

3- Supporting the Islamic center occurs also through suggesting a good idea to establish new important projects. It also occurs through constructive criticism for existing projects and programs so that they get better. Support does not occur from those who do not show action or from those who criticize only for criticism and always reject others. These people weaken some workers who may leave the projects and subsequently these projects will be weak.

4- Supporting the Islamic center is also done by effective participation in the existing programs and activities by taking your family with you. It is a must that you make this participation a part of your daily and weekly schedule. This participation will help you keep coming and so will be beneficial for you and your family. Also, do not forget that you children need social upbringing that will not be accomplished except through the Muslim community. You can not accomplish this alone. The Prophet

ordered us to stay with the Jamaa'ah (community) and warned us from staying away from it. He

said: "…Stay with the Jama'ah (community) and be cautious of divisions…" [Saheeh Al-Jaami']

5- Supporting the Islamic center is done also by making other Muslim members of the community aware of the activities and programs that the Islamic center has. Also, make sure that you take some of them with you. This way, you will be performing the Muslims’ due rights and so you will be rewarded without decreasing their rewards on the Day of Judgment.

What helps you participate in the center’s activities and programs is your home. If you live closer to the Masjid (mosque), you will be more easily able to participate in the daily prayers for example. It is important that you also establish good relationships on the basis of Islam with other Muslim families. And to make effort to live in a neighborhood with other Muslim families, so that you can share your experiences about raising your children with them.

We need to establish good relationships on the basis of Islam with other Muslim families. That relationship should be based only on Islam and nothing else. Also, be aware from falling into racism, nationalism that the Prophet

warned us against. The racism can be exploited by the satans (devils) among people and Jinn, which will lead to the destruction of the Muslim unity.

To keep away from the racism involves a number of things:

1- To develop good relationships with Muslim families that do not belong to the same nationality or ethnic background.

2- Be aware and avoid the activities that are aimed at only specific nationality or ethnic background or race, for example Arabs with Arabs only, or Indians with Indians only, or Pakistani with Pakistani only, or the Afro-Americans with the Afro-Americans only, even if these activities are intended to build a Masjid or a center or an organization. This will destroy the unity among Muslim community. Allah, Most High, Says (what means): "And hold fast, all of you together, to the rope of Allah (Quran or Islam), and be not divided among yourselves…" [Quran 3:103] Allah, Most High, also Says (what means): "The believers are nothing else than brothers…" [Quran 49:10]

Many people who fall in the traps of nationalism are not even aware of the seriousness of this practice which destroys the relationship among Muslim children and among Muslim families. Therefore, destroys the meaning of the Islamic universal message that we need to implant in their minds and exemplify it in their reality