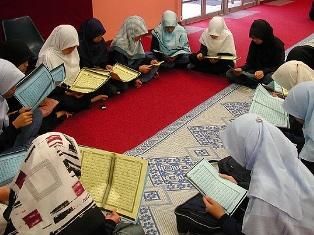 Feeding others during Ramadan:

reported: “I heard the Messenger of Allah

saying: “O people, exchange greetings of Salaam (i.e., say: As-Salaamu `Alaykum to one another), feed people, strengthen the ties of kinship, and be in prayer when others are asleep, you will enter Paradise in peace.” [At-Tirmithi]

Feeding people in general and the poor and needy in particular, is an act that is greatly rewarded and appreciated. However, one thing which we must bring to people’s attention are the long hours a woman spends in cooking different dishes for guests, which wastes her entire day. It is almost as if Ramadan is a month to display the woman’s expertise in cooking and preparing a breath-taking table. Fasting was not legislated for this; rather it was legislated for people to achieve piety and not over-indulge in different dishes of food when breaking the fast at sunset, and consequently, in some cases, become too lazy to pray.

Another related issue is extravagance in spending when preparing a meal. A woman should not exaggerate in spending and should advise her husband not to do so, as Allah does not like those who exaggerate.

Some people prepare food to feed others, but when they send it, they do not ascertain that they are sending it to the deserving people like the needy, the poor, single men who have to work all day or students who have to attend classes during the day and have no one to cook for them. These people are more worthy of receiving the food than exchanging food with one’s neighbours.

said: “He who provides a fasting person something with which to break his fast, will earn the same reward as the one who was observing the fast, without diminishing in any way the reward of the latter.” [At-Tirmithi] According to this narration, a person offering food to others to break their fast must give them enough food to suffice them. A woman’s cooking and preparation of the food entitles her to the same reward as her husband who worked and earned the money with which the food was bought.

Assisting her husband in his worship:

Many people find it difficult to wake up for prayers during Ramadan due to sleeping late at night, thus it is the woman’s duty to assist her husband and encourage him to perform the prayers and other virtuous deeds.

Some men give instructions to their wives not to come close to them and not to wake them up unless they wake up on their own, regardless of how late that may be. I say that a woman must perform her duty in advising the husband using kind words and wise methods when doing so.

said: 'O women folk! You should give charity and be diligent in seeking Allah's forgiveness because I have seen (i.e., on the Night of the Ascension to the highest heavens) that the majority of the dwellers of the Hell are women.'” [Muslim] This Prophetic guidance is generally applicable at all times and more so during the month of Ramadan, when practicing charity becomes more rewarding.

Women must ensure when they spend, that whatever they give in charity goes through the proper channel to trustworthy organizations.

Another related issue is paying the due Zakah, whether it is for a business, cash, gold, jewelery or other categories of wealth that reach the minimum amount that mandates Zakah, provided a full lunar year has elapsed from the time one possessed it. It is permissible for the husband to pay the Zakah due on his wife if he wishes to do so as an act of benevolence to his wife, but he must inform her that he is doing so.

Reforming the house during Ramadan:

A woman must refrain from all prohibitions at all times, and this becomes more of an obligation during this blessed month. Many women are in the habit of backbiting and tale bearing, and this is worse when done during this blessed month. Many people gather after the Taraaweeh prayers (i.e. the congregational optional night prayers during Ramadan) and indulge in many such prohibitions.

A pious woman is one who turns such gatherings into gatherings for remembering Allah and gatherings of obedience, as a means of reformation for all those present.

Additionally, a pious woman is always keen to make her house free from sin and evil, and thus she must strive to remove anything that is displeasing to Allah from her house in order for servitude to be completely fulfilled, unlike those who fast during the day and indulge in different types of prohibitions during the night.

Many houses are filled with prohibited things and it is the responsibility of the woman to clear her house of them.

Finally, a woman must take advantage of this month, since in Ramadan, hearts are boosted with faith and more receptive, and thus more likely to adhere to virtuous advice.