An Urgent Message to My Muslim Sisters in Ramadan - II 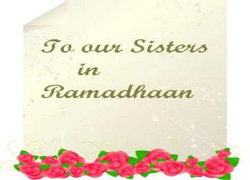 Ramadan is distinguished over other months by the Taraaweeh prayer. Praise be to Allah The Almighty, many women and girls are keen to perform Taraaweeh prayer in the mosques. However, dear sister, if you want to have your full reward, you should observe the following points and advise your daughters and sisters to observe them:

1)              Girls and women should abide by the Sharee‘ah-approved Hijab and Islamic dress code when they go out to pray. They should not wear trousers, tight or short dresses, or fashionable apparel. They should wear a wide and clean dress for prayers.

2)              The cloak should be thick, not transparent, not brocaded, not colored and not likely to attract attention.

3)              The head cover should be large, long, not transparent and free from all forms of embroidery that attracts attention.

4)              They should not wear any perfume or incense. Unfortunately, this action is widespread among women who perform prayers in mosques to the extent that their fragrance can be smelt from a long distance. In an authentic Hadeeth, the Prophet

said: "Any woman who wears perfume and passes by men so that they smell her perfume, she is an adulteress and every eye that looks at her is an adulterous eye." The Prophet

also said: “Any woman who applies incense should not witness the ‘Ishaa' prayer with us.” [Abu Daawood] Ibn Nufayl

said that this refers to the late ‘Ishaa'. This does not mean, however, that women should not care about their personal hygiene or change their clothes everyday to avoid having a foul odor which may cause offense.

6)              They should not carry pagers or mobile phones during the prayer, for angels hate music, and it distracts people and prevents Khushoo‘ (submission) in prayer, especially with those strange mobile ring tones. Knowing that it is prohibited to listen to musical instruments in people's houses, what would the ruling be on listening to them in the House of Allah?

8)              Some mothers go out to perform prayers and leave their young children in the house alone. These children might do dangerous things. We advise our sisters and mothers not to leave children alone in the house, so that the mother would not be shocked when she returns. We address every woman who seeks the reward of Allah The Almighty that, in principle, it is preferable for women to perform prayer in their houses and that the reward for praying in the house is greater than the reward of praying in the mosque. It was narrated that the wife of Abu Humayd As-Saa‘idi

and said, “O Messenger of Allah! I love to perform prayer with you.” He

9)              Some of our girls, may Allah guide them, go out for the purpose of performing Taraaweeh prayer in the mosque, but after the prayer is over they go off with some of their friends to the markets or other evil place where their parents do not expect them to go. The mother should take care of her adolescent girls and be sure that they are actually leaving to perform prayer and nothing else.

Finally, I would like to say that devils from mankind - while the devils from the Jinn are chained - will not leave you to enjoy the month of Ramadan. Rather, they will try to fill the gap that their brothers have left to ruin that month with television series, movies, video clips, quizzes, cheap songs and worthless programs. Thus, watch out for yourself and your house and do not let that month pass without benefiting from it, and be careful not to squander its reward. In Ramadan, there is no time for such nonsense because it is too precious to be wasted. We ask Allah The Almighty to make Ramadan a good and blessed month for us and for all the Muslims. I wish for you all that is good in Ramadan.

An Urgent Message to My Muslim Sisters in Ramadan - I