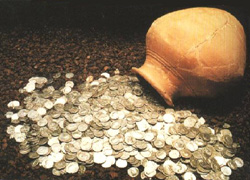 enjoined the payment of one Saa‘ (double handful) of dates or one Saa‘ of barley as Zakat-ul-Fitr for every Muslim, slave or a free person, male or female, young or old, and he ordered that it should be paid before people went out to offer the ‘Eed Prayer." [Al-Bukhari and Muslim]

In another narration, Naafi‘

made Zakat-ul-Fitr obligatory as a means of purifying the fasting person from idle talk and foul language and to feed the needy. Whoever pays it before the prayer, it is an accepted Zakah (for him), and whoever pays it after the prayer, it is simply a type of charity.” [Abu Daawood and Ibn Maajah; Al-Haakim: Saheeh; it meets the conditions stipulated by Al-Bukhari; Al-Albaani: Hasan]

It was narrated on the authority of Qays ibn Sa‘d

ordered us to pay Sadaqat-ul-Fitr before the obligation of Zakah. Once Zakah was ordained, he neither ordered nor forbade us while we were still paying it." [An-Nasaa'i, Ibn Maajah and Ahmad; Al-Haafith in Al-Fat’h: Saheeh]

Second: It is obligatory for every Muslim to pay Zakat-ul-Fitr on his behalf and on behalf of those whom he is obligated to provide for, like his wife and children.

Third: If the wife and children earn their living or have money, it is preferable that every person pays it on his or her behalf because they are obliged to pay it. However, it is permissible for their guardian to pay it on their behalf even if they have their own money.

Fourth: It is not permissible for the Muslim to pay the monetary value of Zakat-ul-Fitr. This is the opinion of the majority of scholars, because the Prophet

neither ordered paying it in the form of money nor paid it as such and none of the Companions paid Zakat-ul-Fitr as money despite its occurrence every year. Also, when food is given to the poor man, it benefits him as well as his family. This is unlike giving him money, which he may save and leave his family hungry. Additionally, paying the value of Zakat-ul-Fitr does not manifest this great ritual.

Fifth: The starting time of paying Zakat-ul-Fitr is the night of 28th of Ramadan. The Companions

would pay it one or two days before ‘Eed. The deadline of paying it is the time of the ‘Eed Prayer as supported by Ahadeeth.

Sixth: Zakat-ul-Fitr is paid to those who deserve it, such as the poor and the needy, since the Prophet

said: "…and to feed the needy." It is not correct to pay it to neighbors or relatives who do not deserve it, as some people exchange it like the meat of Udh’hiyah (Sacrifice) or ‘Aqeeqah (a celebration of birth). However, this is different. Zakat-ul-Fitr must be given to those who deserve it; the meat of the Udh’hiyah and ‘Aqeeqah, however, can be gifted. It is also incorrect to pay Zakat-ul-Fitr every year to a specific family who was once poor and are not so anymore. It is not permissible for the Muslim to keep on paying them Zakat-ul-Fitr after they have become well-off.

Seventh: It is preferable for the Muslim to give Zakat-ul-Fitr to the poor people in his country; yet, it is also permissible to transfer it to other countries particularly if their people desperately need it and he does not know any poor person who needs it in his country, or that there are other Muslims who can give the needy in his country Zakat-ul-Fitr.

Eighth: Zakat-ul-Fitr involves many pearls of wisdom and benefits, such as:

1- Showing gratitude for the favor of Allah The Almighty that one has completed fasting and finished after Ramadan. Allah The Almighty Says (what means):  {….To  complete the period and to glorify Allah for that [to] which He has guided you; and perhaps you will be grateful.} [Quran 2:185]

2- It is a Zakah on the body which Allah The Almighty has sustained for a whole year.

3- It purifies the slave's fasting from the idle talk, foul language and the like. The Hadeeth stated that Zakat-ul-Fitr purifies the fasting person from idle talk and foul   language.

4- It gives comfort to the poor and the needy and prevents them from begging on the day of ‘Eed, so that they will be happy and satisfied like all other Muslims on ‘Eed.

5- It trains the fasting person in generosity and giving, and protects him from stinginess and niggardliness.

Twelfth: If the Muslim forgot to pay Zakat-ul-Fitr at its due time and did not remember to do so except after the ‘Eed Prayer, he should pay it. There would be no blame on him because he is excused by his forgetfulness.

Thirteenth: If the Muslim authorized someone to deliver Zakat-ul-Fitr to its legal recipients, it should be delivered to them before the ‘Eed Prayer. However, if the poor man asked the giver to keep it with him till the former would come to the latter, it would be permissible for the person authorized to keep it even till after the ‘Eed Prayer.