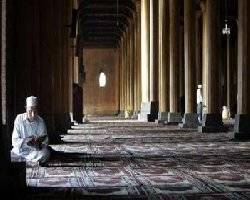 said that as the soundness of the heart and its adherence to its way to Allah depends on its full devotion to Allah The Almighty, and because excessive food, drink, intermixing with people, talk and sleep all distract the heart from its moving on its way to Allah, weaken it, prevent it or even stop it, then the mercy of Allah upon His slaves requires imposing fasting on them to get rid of the excess food and drink and purify the heart from the impurities of personal desires that represent an obstacle on its way to Allah. Fasting is obligated upon the slave in a way that guarantees his benefit in this world and the Hereafter and this does not harm his worldly interests. Moreover, I‘tikaaf (seclusion in the mosque) was prescribed by Sharee‘ah with the main purpose of making the heart fully occupied with and totally devoted to Allah alone, seeking nothing but His pleasure and finding intimacy in none but Allah, thus, this intimacy will remove his loneliness in the grave and grant him happiness, and this is the greatest purpose of I‘tikaaf.

With what should the person in I‘tikaaf be occupied?
There is a very beautiful principle that was mentioned by Shaykh ‘Abdul-‘Azeez ibn Baaz

and to which Ibn Al-Qayyim

referred. From this rule, one can find out whether the I‘tikaaf is sound or defective. They said that the essence of I‘tikaaf is to be too preoccupied with the Creator to notice any creature. The one practicing I‘tikaaf is always busy remembering and mentioning Allah, supplicating to Him, asking Him for forgiveness, returning to Him in repentance, reciting the Quran, meditating over its meanings, praying, and contemplating his way to Allah; and this contemplation is one of the greatest purposes of I‘tikaaf. We are in a grave predicament because there are so many things to do and so many distractions that may not give us the opportunity to stop and think whether we are on the right path or not. The reality of the youth proves this, as they are always too busy to sit, think and contemplate their conditions and if they do that, they will realize that they are moving in the wrong direction. So, when one makes I‘tikaaf, he leaves all worldly affairs behind and leaves even some tasks that could be related to his obedience to Allah, like Da‘wah (propagation) related tasks and seeking knowledge. One leaves all this behind to be in seclusion with himself and his Lord and to contemplate alone whether he is moving towards Allah as he should and whether he is on the right path. If man would only take a pause and stay in seclusion for a while away from the problems of life and its troubles, away from his companions and friends, away from criticizing certain people and certain methodologies and away from condemning others. If man were to take such a pause for meditation and contemplation and implore his Lord to guide him to the right path, He would definitely guide him to the right path, the path of the Prophet,

, and his noble Companions. I‘tikaaf is, thus, a great opportunity for the one who practices it perfectly to think deeply and contemplate and thus receive a great faith-boosting push and provision to continue on his way to Allah, to continue with his life and Da‘wah filled with determination, sincerity and strength.
Is there a way out of the dilemmas that the Ummah (Muslim nation) is facing now? Who can reach that exit?
Thinking during the I‘tikaaf in seclusion could actually guide one to a solution to that bitter reality that our Ummah is living through. The polytheists of the Quraysh did not believe in the Prophet,

, saying that they were only following in the footsteps of their fathers. At this point, Allah The Almighty addressed them Saying (what means): {Say, "I only advise you of one [thing]…} [Quran 34:46] What is this one thing? {…That you stand for Allah , [seeking truth] in pairs and individually, and then give thought.} [Quran 34:46] To think whether your fathers were right or wrong. In the same way, Allah guides us to a way out of difficult situations Saying (what means): {Then do they not give thought? There is in their companion [Muhammad] no madness.} [Quran 7:184] In this verse, Allah called them to think and contemplate. We too must think and make sure we are on the right path because every human being will be held accountable before Allah for his deeds. Yes, we must benefit from our scholars and follow their example, however, every human being is liable to make mistakes except our Messenger,

. Many people refuse to open their minds except to certain scholars and seekers of knowledge. I have even heard some of them quoting junior knowledge seekers and refuse to listen to seniors. No human being is infallible, except the Prophet,

, and we are not required, rather we are not permitted, to consecrate any human being other than the Messenger of Allah,

. We have to seek the truth from whomever has it without shutting our minds against eminent scholars and the advocates of truth, even if they make mistakes, and open our minds to junior knowledge seekers and callers to Allah. To not do so is unreasonable. When Abu Hurayrah, may Allah be pleased with him, came to tell the Prophet,

, about his story about the devil who would take from the dates he was guarding, and how the devil guided Abu Hurayrah the final time to reciting Aayat Al-Kursi, the Prophet,

, did not command him to ignore what the devil had said to him. Rather, he told him that the devil had told the truth although he is a persistent liar. This story of Abu Hurayrah, may Allah be pleased with him, with the devil, who is a persistent liar, has come to become one of the greatest proofs of the virtue of Aayat Al-Kursi and the protection that it grants the Muslim. So, how can one refuse to listen to a scholar or group of scholars because they have merely made some mistakes in their Ijtihaad (personal effort), when they are not advocates of Bid‘ah (religious innovation) nor followers of personal fancies. When we allow ourselves to listen to those who warn us against scholars and callers from Ahlus-Sunnah (the People of the Sunnah), because they make mistakes and listen solely to others from among the inexperienced junior knowledge seekers, we contribute to the adversities and calamities that befall our Ummah. I‘tikaaf and seclusion, thus, give us an opportunity to think and contemplate because each of us will experience death alone, be buried alone, resurrected alone, held accountable before Allah alone and pass the Siraat (bridge over Hell) alone.
The person in I‘tikaaf must also be careful in hastening to offer prayer at the beginning of its time and to boost his faith and hold himself accountable for being negligent and get ready for carrying out the duties of Da‘wah, knowledge and Jihaad.
What the person in I‘tikaaf should be wary of:
The one practicing I‘tikaaf should avoid intermixing with others except when praying with people and other essential matters. He should be keen on fulfilling the meaning of seclusion and I‘tikaaf and consume less food and drink - only what is necessary. Some people, may Allah grant them guidance, hold banquets during their I‘tikaaf. They transfer their home meals to the mosque although they should not do this. I have seen some young men making I‘tikaaf as if they were in some summer activity center. This is no I‘tikaaf. One should sleep less, talk less and mind his own business. All these represent part of the wisdom behind I‘tikaaf. The Prophet,

, whom the Ummah was in great need of, did not even talk to his Companions during his I‘tikaaf. Hence, we have to follow his example. Talk as needed only during your I‘tikaaf and avoid humor and laughing and what is of no use.
A Question:
Can you, dear brother, live these days of I‘tikaaf without committing sins?
The answer to this is: Yes, you can! How could you possibly disobey Allah while being in His House in the last ten nights of Ramadan and while making I‘tikaaf!