At the Gates of Paradise - I 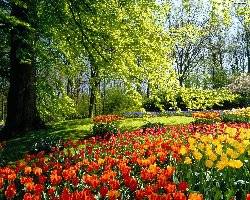 Every now and then, the believer looks forward to something that raises his enthusiasm, motivates him to do righteous deeds, and strengthens the steadfastness in his heart. The Messenger of Allah,

, said that Allah The Almighty Says: "I have prepared for My righteous slaves what no eye has seen, no ear has heard, and the mind of no man has conceived." ( then Messenger of Allah,

, said ) the If you wish, recite: { And no soul knows what has been hidden for them of comfort for eyes as reward for what they used to do. } [Quran 32:17] [Al-Bukhari and Muslim]

Allah The Almighty informed us of Paradise to make us long for it. He manifested some of its bliss and concealed some of it as a sort of encouragement and stimulation. Therefore, the bliss of Paradise, no matter how it is described, cannot be grasped by the human mind, because it contains goodness that never comes to man's mind or is known to anybody.

But before we begin, we must stop and ask ourselves some questions: Do we long to enter Paradise? Is the presence of Houris, food, and drink the only things we know about Paradise? Or do we know more details?

Dear reader, if you want to change and make Paradise your premier goal, join us on this blessed journey, but first make sure to fasten your concentration belt, dispose of your heedlessness, and take good companions along with you. These are the conditions of the takeoff on our journey. Let us go!

Dear reader, think with me why Allah The Almighty Says in this verse (what means): {and its gates have been opened.} [Quran 39:73] and when He talked about Hell He Says (what means): [Quran 39:70]

Actually, it is a wonderful note taken by the great Imaam Ibn Al-Qayyim

That is because the angels are driving its denizens to Hell while its gates are closed. When they arrive at Hell, its gates will open up in their faces and punishment will suddenly surprise them. As they enter Hell, the gates will open without them noticing. This usually happens with the penalty which is made contingent on something that takes place immediately after that condition. Hell is the abode of humiliation and disgrace, so permission is not sought for its denizens, nor are its keepers asked to allow them to enter.

Paradise, however, is the abode prepared by Allah The Almighty; the abode of dignity where His favorites and allies dwell. As people reach Paradise, they will find its gates closed, so they earnestly implore its Owner to open them. Also, they will intercede to Him by His most resolute messengers, but all of them will withdraw until they are guided to go to the final and master of them. The Prophet

will say: "I am entitled to that," and thus, will prostrate under the Throne to his Lord, supplicating Him as much as He wills.

in His Sight. This is more effective and greater in showing the perfection of the blessing and the occurrence of joy and happiness than otherwise. This prevents the ignorant man from thinking that it is like an inn for whoever wants to enter. The Paradise of Allah is precious and there are obstacles, wilderness and dangers that must be faced first in order to attain it.