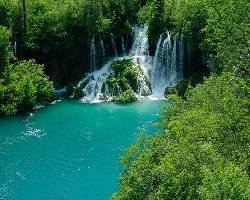 See what excitement the believers will encounter on the Day of Resurrection! I imagine how they will feel – may Allah make you and us among the inhabitants of Paradise. After the horrors and hardships the believers saw befalling the sinners on the Day of Judgment and, before that, the trials and desires they patiently resisted in this life, their longing to see the bliss that Allah The Almighty has prepared for them becomes enormously great.

The greater their longing, the greater the enjoyment of the meeting will be. Thus, Allah The Almighty wanted to increase the longing of the believers at the highest level by letting them stand in front of the gates of Paradise for a period of time while thoughts conflict in their minds and they feel that they are at a distance of two bow lengths or nearer from seeing what Allah The Almighty promised them in this life. After the Prophet,

, intercedes with his Lord, Allah The Almighty will give him permission to open the gates of Paradise. The Messenger of Allah,

, said: "The distance between two shutters in Paradise equals the distance of  a forty-year walk. People throng there like camels that throng to drink water after five days of thirst." [As-Silsilah As-Saheehah by Al-Albaani]

Can you imagine the width of the gate? It is like a distance of a forty-year walk, i.e. it is impossible to see the end of it, where people crowd as if one has brought camels to water after five days of thirst. Imagine how they will run. Similarly, this will be the state of the people of Paradise in their longing for it. After entering Paradise, its gate will not be shut behind you, do you know why? Imaam Ibn Al-Qayyim

will tell you that. He said,

Reflect on the Saying of Allah The Almighty (which means): [Quran 38:50-51] and see the verses carrying an elegant meaning. That is when they enter Paradise, its gates will not be closed behind them, but they will remain open. Also, keeping the gates open implies that they go and return freely, and dwell in Paradise and that the angels enter upon them every time with gifts and graciousness from their Lord and what brings them happiness at all times. It is also an indication that Paradise is an abode of security where its inhabitants do not need to close the gates as they needed to do so in this life.

Now, we will leave you to choose which gate you would like to enter Paradise through. The Messenger of Allah,

, replied: "Yes, and I hope that you will be one of them." [Al-Bukhari and Muslim]

Now, choose the gate you wish to access Paradise from, and how excellent if you will be a companion of Abu Bakr

on the Day of Judgment!

Dear reader do you see the extent to which Allah The Almighty prepared Paradise for His righteous slaves and how He made  them long for it before they enter? Has your heart not been softened, dear brother? Do you not long to enter Paradise and experience this bliss?

At the Gates of Paradise - I